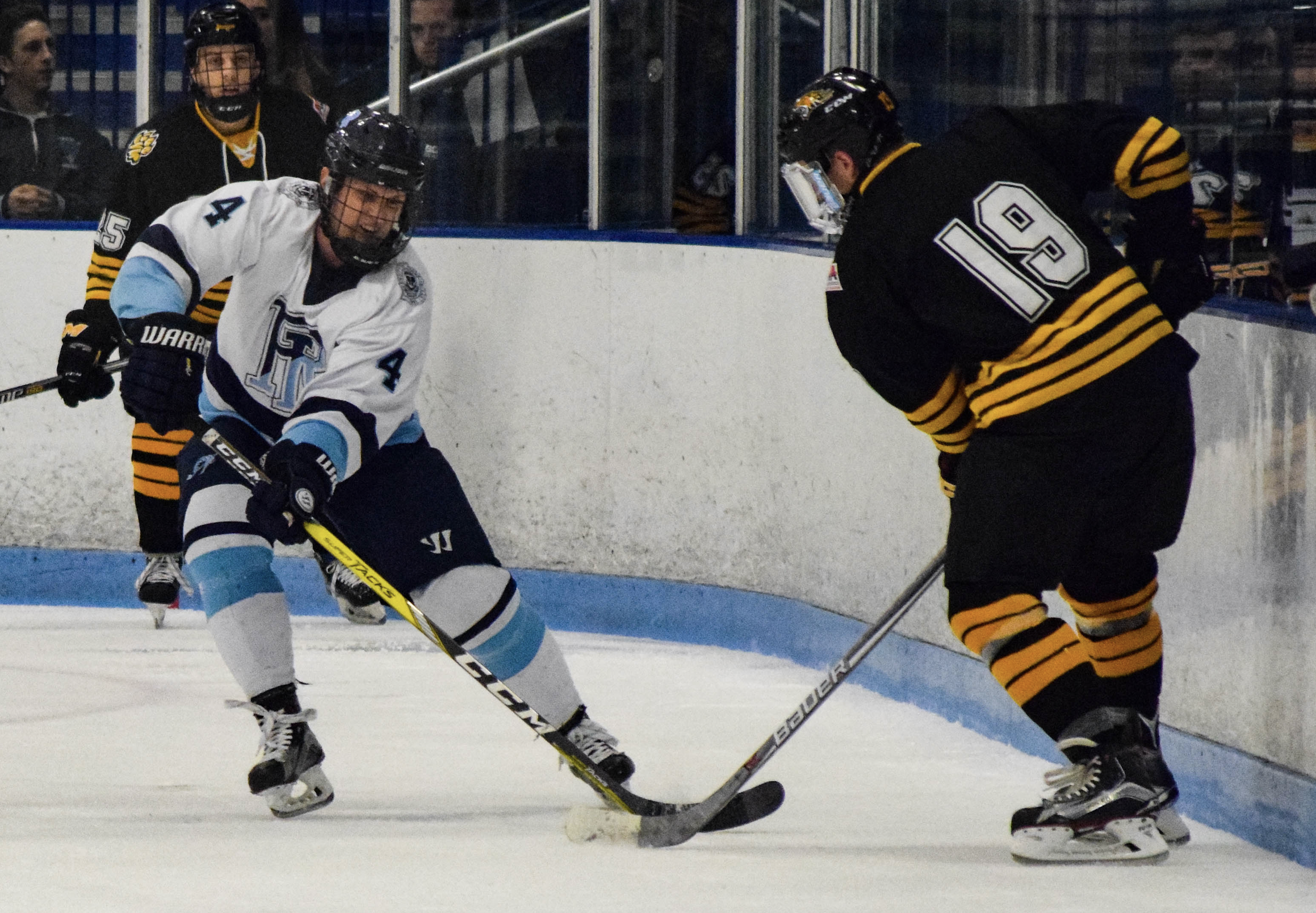 Photo by Autumn Walter | Men’s hockey started the season off strong with back to back shutouts against the Towson Tigers.

The URI Men’s Ice Hockey team began the season on a high note, beating the Towson Tigers in back-to-back games this weekend to start 2-0 on the year.

The Rams outscored the Tigers 18-0 over the course of the series. That included an 11-0 victory on Friday night. The second game was a little closer, with the Rams tallying seven goals and another shutout.

The Rams were led by Jonathan Alsfeld and Jake Salisbury, who each recorded hat tricks over the weekend. Alsfeld had an extremely successful game one, putting four pucks in the back of the net out of the five points scored during the game. He finished the weekend with nine points. Salisbury, not to be outdone, matched his linemates performance in game two. Salisbury recorded three goals and two assists, also en route to a five-point performance on the day.

Coach Joe Augustine, now in his 30th season behind the bench, spoke highly of his top line’s performance during the series.

“Obviously the Salisbury line had a very good weekend,” said Augustine. “They scored 10 goals, that’s really good. We were quicker than they are, but it’s not going to be like that every weekend.”

The Rams top line, consisting of Jonathan Alsfeld, Jake Salisbury and Patrick Creamer was leading by example for the rest of the team. “They can set the tone with their speed and their scoring ability,” Augustine said. “That basically was a good example to the other lines. Instead of trying to do things as individuals, if you pass the puck and skate to holes and get open, you’ll get the puck back, and they moved it really well. It’s a lesson to the other three lines.”

One of the other major takeaways from the weekend was the number of goals that sneaked past the Rams netminders. JT Ketzenberger posted the Rams first opening night shutout in a decade, with their last occurring the 2008 season. The second game was anchored by sophomore Daniel DeSilva. He led the Rams to back to back shutouts in the opening series for the first time since the 05-06 season, the season of the Rams national championship.

Augustine had high praise for both of his goaltenders and their effort this weekend. “It’s from the net out,” said Augustine. “You’ve got to have good goaltending, good defense, and you’ve got to be strong up the middle. That’s how you want to build your team at any level, from the net out. We think we have strong goaltending.”

The Rams will open conference play this weekend, playing the Syracuse Orange in Kingston on Friday and Saturday. “Now with Syracuse, we’re into the heat of it immediately,” Augustine said. He also said that this team will be a bigger test for the Rams squad. “I think they’re very similar to us. They’re not really a big physical team but they have a lot of skilled players.”