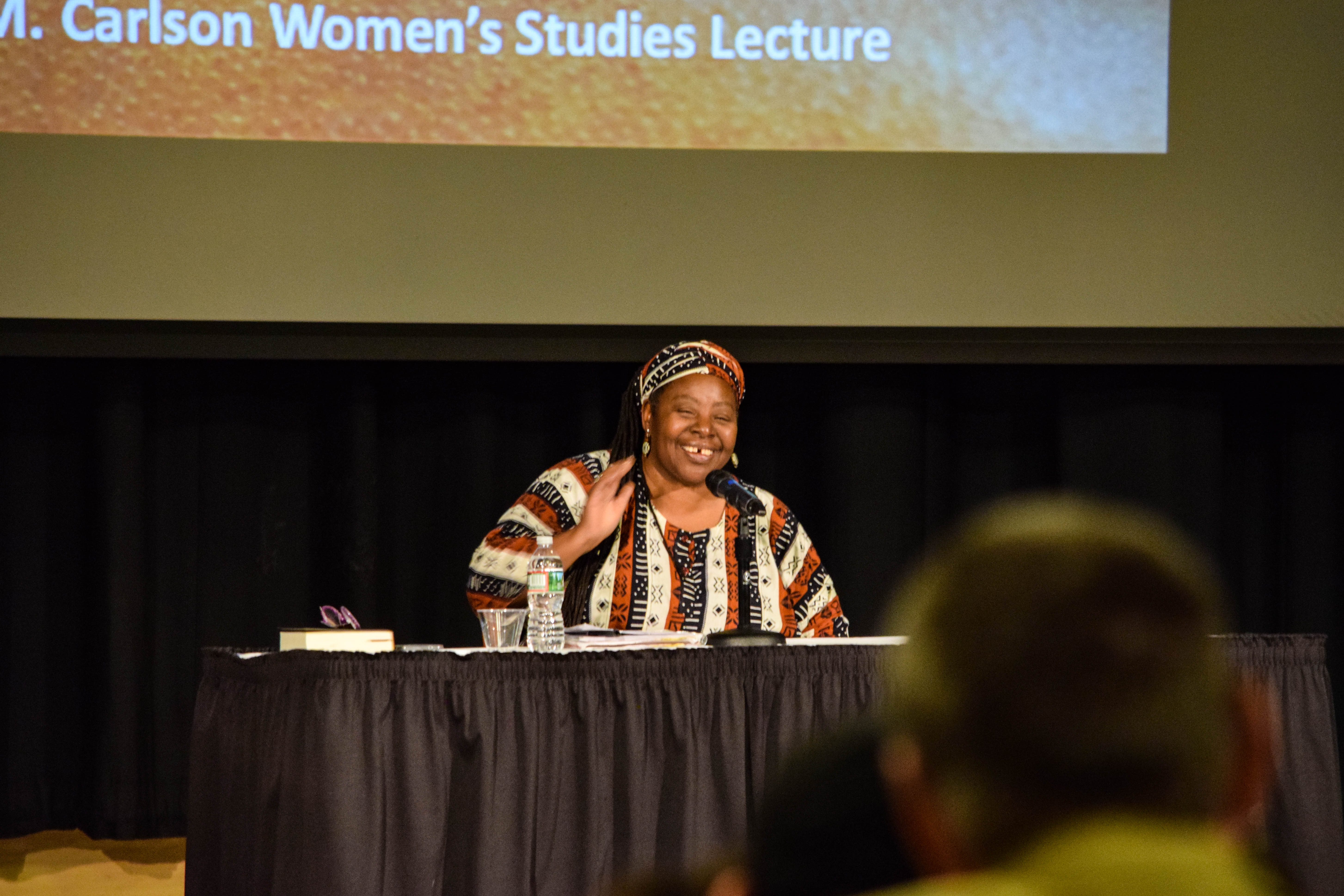 As part of the 2018 Honors Colloquium Lecture series, the University of Rhode Island hosted Loretta Ross, an activist who advocates for reproductive justice for women.

Ross began the night by discussing her career and experiences in activism. She talked about working at the Washington, D.C. Rape Crisis center, which is the first in the country. From there, Ross began to be an activist in her community, vocally advocating to end violence against women.

While working at the center, she received a letter from a prisoner who raped and murdered a woman. According to Ross, his letter stated,
“Outside, I raped women. Inside, I rape men. I’d like not to be a rapist anymore.”

Ross and her team started teaching black feminism classes at a local prison.

This particular instance was interesting to Ross, as she is a rape survivor herself. At age 11, she was kidnapped and raped. When she was 14, her cousin got her drunk and raped and impregnated her, which later led to her first child. Ross, having her own troubled past had a hard time responding to these prisoners who were both victims and perpetrators themselves.

“Me, as a rape survivor, had to figure out how to respond to this perpetrator’s letter,” Ross said.

She continued with a story about her work as research director at the National Anti-Klan Network. According to Ross, part of her job was “helping to deprogram people who had left the hate movement.” This proved difficult for her as she had no interest in talking to Klansman. At the time, Ross saw Klansman as “roaches who only came out at night.”

However, once she got a chance to know these people, Ross couldn’t bring herself to hate them anymore. Instead, she worked on developing her communication skills with people who thought differently than her.

“I had to develop the skill set of having difficult conversations with people who very recently thought I shouldn’t be alive,” Ross said.

Ross then briefly touched on the Kavanaugh trial and its aftermath, specifically how his appointment to the Supreme Court is affecting society. “Obviously, the Trump administration are trying to keep the evangelical vote close within their ranks because they depend on that base,” Ross said.

Ross connects the desire from the Republicans to get Kavanaugh into office to the concept of the “minority majority.” The “minority majority” is the idea that the accumulated population of minority races in the United States will become a majority of the population in the future. “There will be a tide of women of color for whom the uncolored can’t manage,” Ross said.

However, Ross’s opinions took a turn in a different direction. “I think this is about compelling white girls, specifically millennial white girls, to have more babies,” Ross said. However, she doesn’t believe this is a true possibility. “I don’t think there’s a scenario in which they can coerce enough white women to have eight and 10 babies anymore. That might have worked in the Manifest Destiny.”

Ross took it a step further by proposing the idea of incentivizing being a mother for this new generation. “What if they were to tell a generation of college students that we’ll forgive $5,000 of your college debt for every baby you have,” Ross said.

Ross moved on to her thoughts on what would happen if abortions were made illegal again. “I don’t think we’re going to return to the days of the coat hangers,” Ross said. “Desperate people, usually young without information, will try self-abortion in very dangerous ways because women do what women need to do depending on what technology is available to them.”

She then mentions that in current society, women have more information about their bodies and can perform those kinds of procedures on themselves if need be. “[Women] have taught ourselves abortion technology,” Ross said. “We run the clinics that are being shut down across America. You think this information is just going to fly out of our heads?”

The first pillar is the human right to have sex with someone and not have children if they don’t want to. The second right is to have the kids that they want to have. The third is the human right to raise our children in safe and healthy environments. The creation of the term was in response to a presentation based on the use of Hillary Clinton’s leadership in Bill Clinton’s attempt to reform health care. “We were outraged,” Ross said. “It didn’t make sense. Reproductive health care is the number one driver of women to the doctor.”

The URI Honors Colloquium will continue with another lecture next Tuesday in Edwards Hall at 7 p.m. by Nancy Folbre who will be speaking about “The Rise and Decline of Patriarchal Systems.”