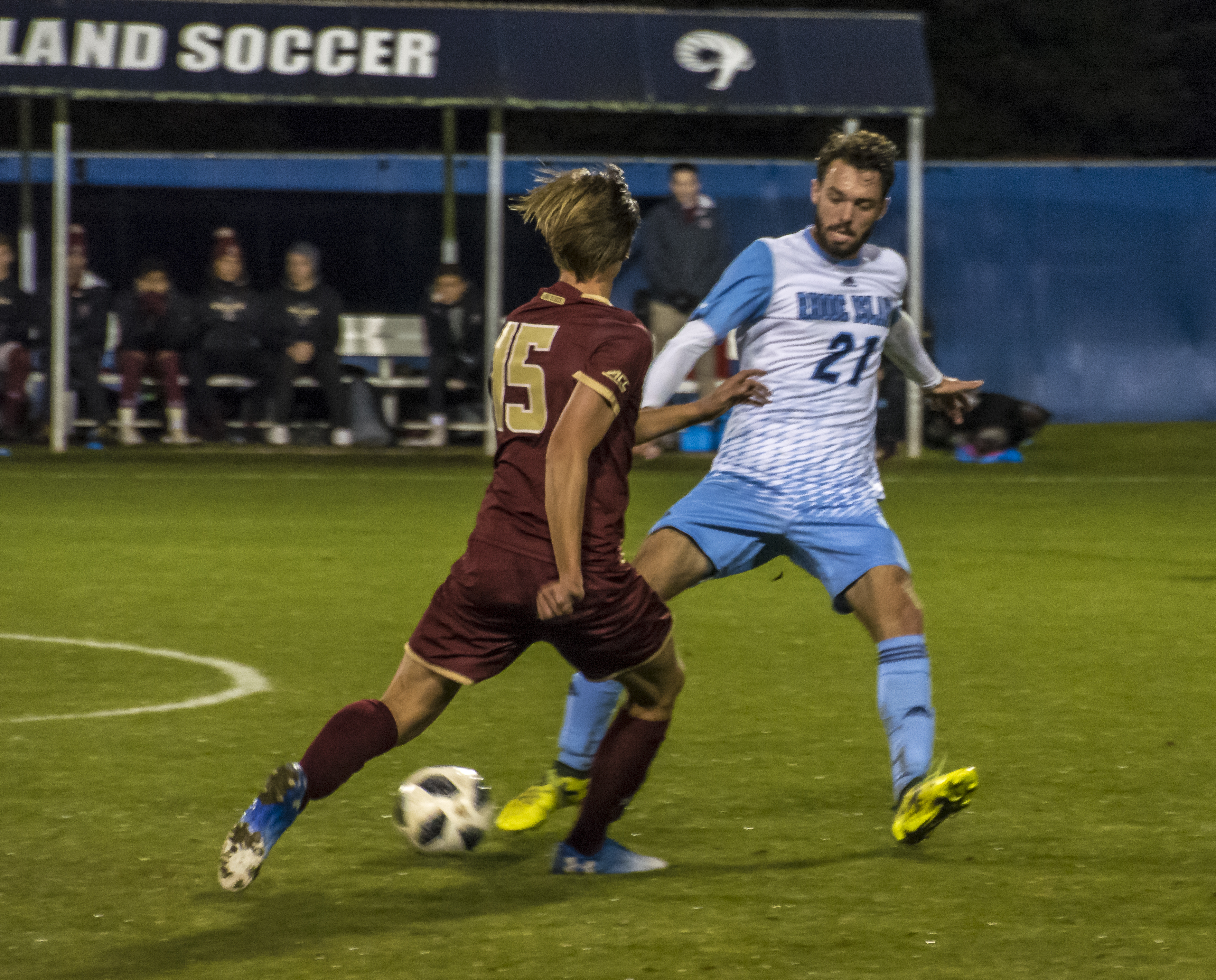 The Rams traveled to Duquesne University to take on the Dukes in a showdown of Atlantic 10 squads. While the temperature was in the low 40’s at kickoff, the Dukes started out scorching hot. Rhody was staring at a deficit three minutes into the game after Duquesne’s senior midfielder Noah Meta scored for only the third time all season.

While the Rams were able to come back the last time they were losing by two, the Dukes would not allow history to repeat itself. They extended their lead to three in the 45th minute, again by courtesy of Meta. Rhody had not trailed by more than one goal at the half all season before the match.

The Rams regained hope in its quest for a result early in the second half. Senior Dominick Richter scored a penalty kick in the 47th minute, the second time this season he scored from the spot.
The goal made the score 3-1 in favor of the home side, a result that held until the final whistle blew. The loss for URI was only their second in the conference this season, and their third overall.

Tuesday night provided a chance to get back winning ways for the Rhody as they faced the Eagles from Boston College in a late-season non-conference match. A tame first half only saw one shot on target for either side, and the New England institutions remained deadlocked heading into the half.

Coming off the bench on the evening, it was Richter who again found the net for URI in the second half. Chae Brangman flicked a header into the path of the senior midfielder, who made no mistake with the finish. On the importance of his star midfielder, Head Coach Gareth Elliott said: “To have someone of his quality off the bench we know he can provide a spark to us.”

Boston College did not let their heads drop following the goal, and were quickly rewarded four minutes later. Simon Entron, a forward for the Eagles, rifled a ball into the right corner, leaving Roger Penske no chance with the save. The score made the game 1-1.

Mother Nature forced URI to permanently postpone a game vs UConn in September, and she was back to cause more chaos. A lightning delay forced fans and players to find shelter, with Coach Elliot was saying after the match, “It was kinda crazy. We didn’t even know if we were going to be able to finish the game.”

Play resumed after nearly an hour-long delay as both teams were clawing for a victory. Two minutes after the restart, an attempt by Tyler Dickson was steered in by Chae Brangman, whose fifth goal of the season proved to be the game winner. The win for the Rams moved them to 10-3-0 on the season.

On Saturday the Rams will take on Saint Joseph’s University in the last home game of the regular season. Senior Day will be celebrated on the evening, with Coach Elliot stressing calmness. “There’s a lot of emotion, a lot of energy within the group, but you just want to make sure everyone controls those emotions as much as possible.” The match kicks off at 7 p.m. at the URI soccer complex.