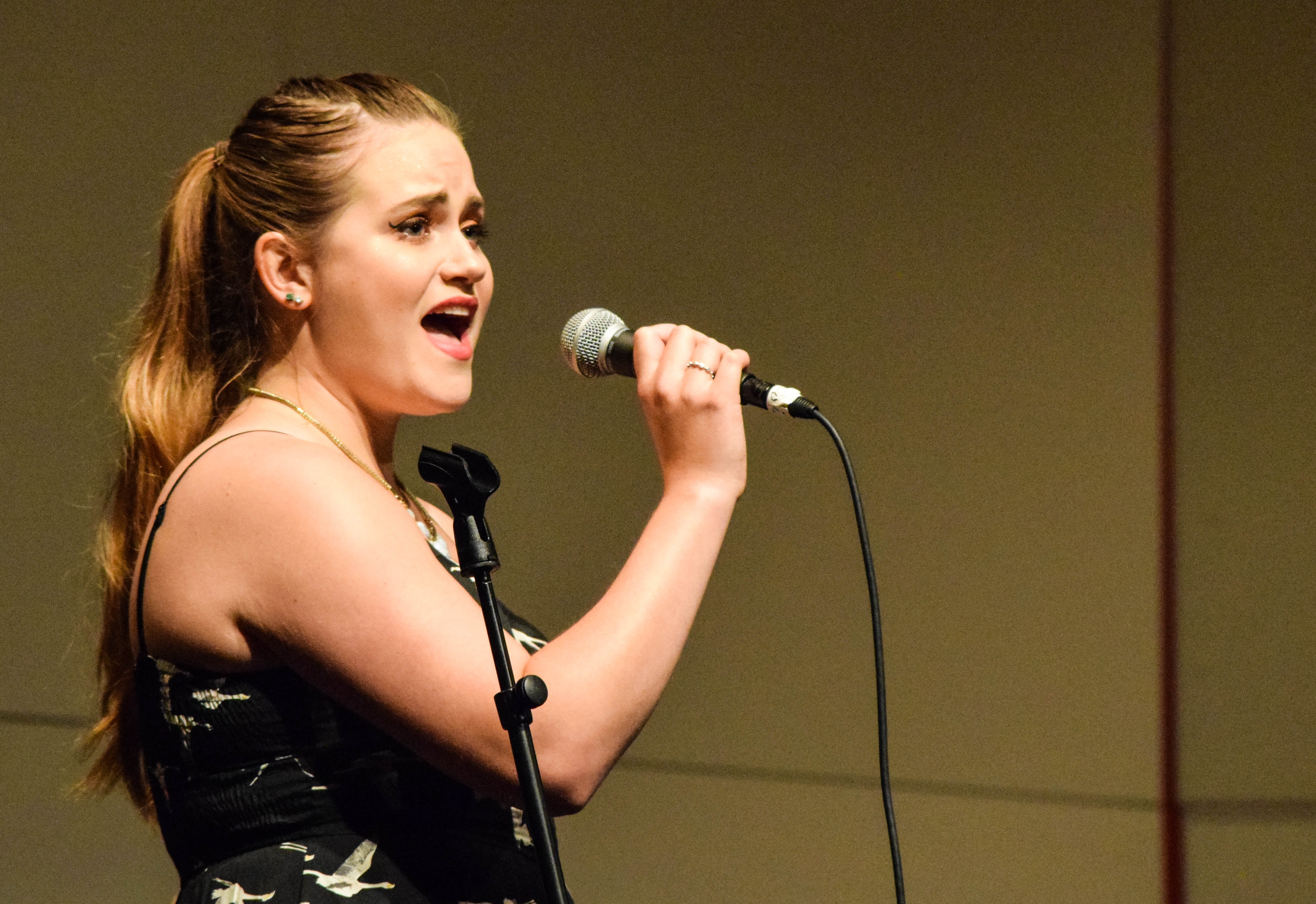 Leonard’s sultry, bittersweet vocals beautifully complemented the instrumentalists with all the alluring charm of a 1920s speakeasy singer. The group then switched gears into a fusion of genres, combining rock, funk, jazz and swing. Even with all the experimentation, the musicians would all “Come Together” as they reimagined the Beatles’ classic and made it their own through unique instrumentation and added improvisation.
Next, The Blu’ Notes, composed of Tom Corey (bass), Ryan Peterson (guitar), Gene Rosati (guitar) and Harrison Dolan (drum set), captivated the audience. In their rendition of “You Stepped Out of a Dream,” the musicians brought warmth to the audience despite the cool fall weather. Their sound had all the spirit of sunlight and the feeling of a warm summer breeze.

They ended with a performance of the traditional folk song and The Animals’ classic “House of the Rising Sun.” By playing with meter, the group turned the original 6/8 beats per measure tune into a haunting rock groove in 4/4 beats per measure. Throughout their repertoire, the group’s improv and personal touches brought their performance to another level.

The final group, the Standards Combo, made up of Michael D. Robinson (trumpet), Isaiah Brown (alto saxophone), Timothy Hecker (baritone saxophone), Ryan Sullivan (trombone), Gene Rosati (guitar), David Zinno (bass) and Riley Hunt (drum set) – focused on more typical jazz tunes, including “My Little Boat” and “Chelsea Bridge.” The high level of musicianship was evident in the seamless transition from one solo to another and the audience felt as though they were watching a conversation unfold before them without a single word being uttered.

While they focused on the more traditional side of jazz, the group also performed “Jackalope,” a fun, high-energy original piece composed by Robinson. The Standards Combo finished off the night with Charles Mingus’s classic “Better Get Hit In Your Soul.” Their rendition exemplified the spirit of life – each instrument had a personality of its own, there was joy and energy and it felt as though one’s very soul was being shown to them in the form of syncopation and cymbal hits.

While it was clear that the musicians were having fun, the intimate feel of the small group concert brought much enjoyment and insight to the audience as well. Student Caitlin Murray was surprised by the vast span of music being performed. “Going in, I thought jazz was very stereotypical,” Murray said. “But I learned that there are many more varieties within jazz than I previously thought.” Much of the audience also seemed to prefer experiencing music live over a recording. “I like being in the moment and seeing everyone perform onstage,” Gabby Peduto, student audience member, said.

Through this performance, it was evident that jazz could have a huge impact on people of all ages, which is partly due to the way in which jazz is performed. For the performers, music was mutual. There were no more or less important parts – every instrument was allowed some of the airspace. Each song made the audience feel happy and comforted, but before they could find a pattern, the music surprised them again with a new melody or tone shift. Jazz is unique because, in the words of drummer Riley Hunt, “There’s an idea. You go with it. If it works, it works. If it doesn’t work… it’s jazz.”

The URI Department of Music also invites students and faculty to attend the upcoming Fall 2018 Music Convocation, a series of weekly concerts followed by discussions. They are held every Thursday at 12:30 p.m. in the Fine Arts Center with free admission.