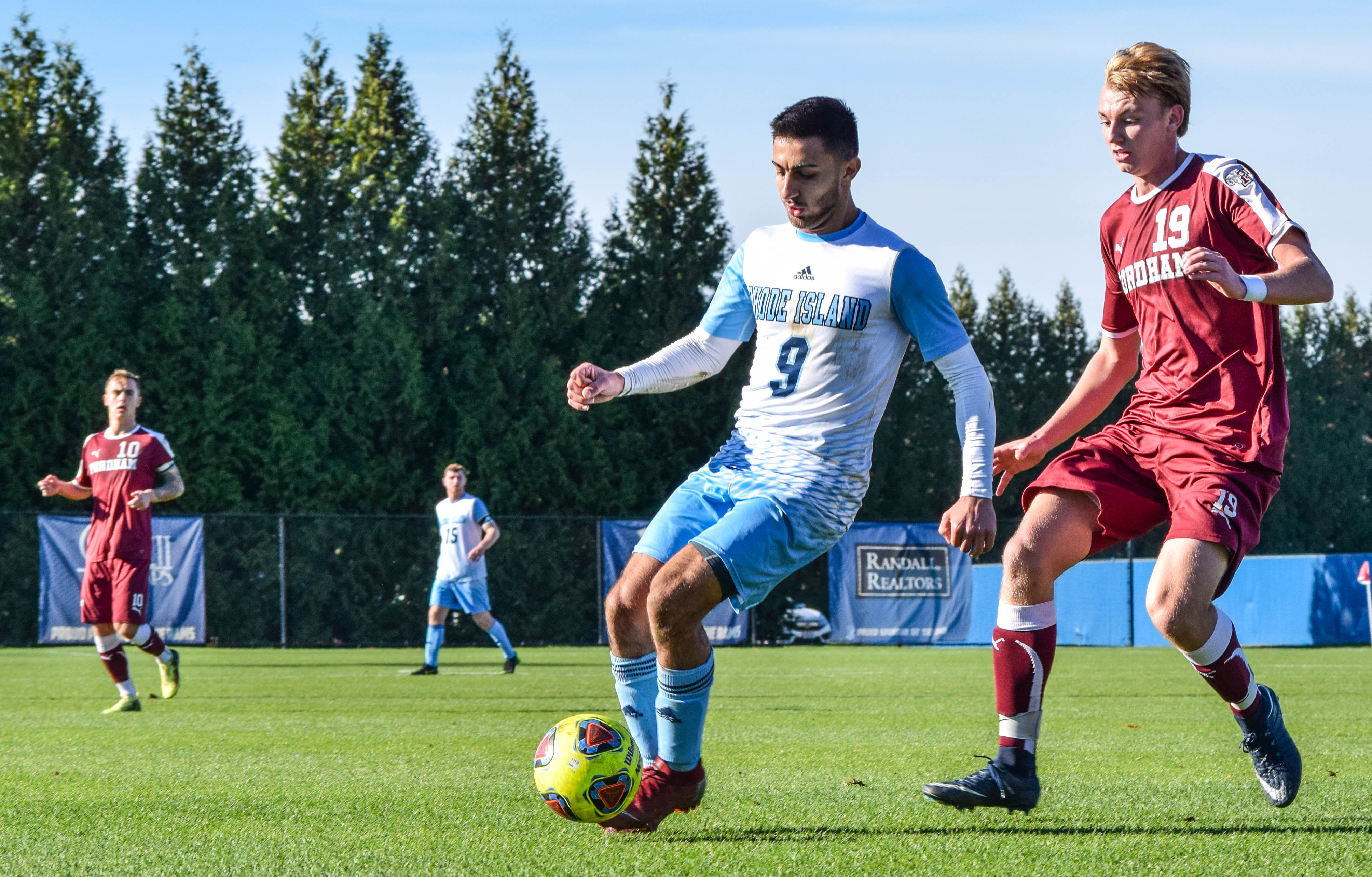 Photo by Anna Meassick | Men’s soccer beat Fordham in the quarterfinals of the A10 Championships with a score of 2-0.

When the calendar hits November, many people tend to think it’s the time of year for leaves falling, colder weather and the start of the holiday season.

For the University of Rhode Island’s men’s soccer team, November only means one thing: postseason soccer.

The Rams hosted Fordham University last Sunday in an Atlantic-10 conference tournament quarterfinal matchup. Both teams rightly treated the matchup as the most important game of the season. A win would book a spot in the tournament semifinals in St. Louis and continue the fight for an NCAA tournament berth. A loss would end the season for either side.

Even in the absence of senior Forward Domenick Richter, it was Rhody who was able to get on the board first. Junior Stavros Zarokostas shot the ball from the top of the box in the 27th minute, with an attempted shot bypassing the on-rushing Fordham keeper before finding the bottom right corner. It was the eighth goal of the season for the native Rhode Island winger, and the second time he scored against Fordham this season.

Fordham began their quest for an equalizer after the goal. The school from the Bronx, who had eliminated URI from the conference tournament in the 2014 and 2016, needed a win in order to have a chance of getting to the NCAA tournament for the second straight season. They forced freshmen Roger Penske into a kick save late in the first half, as the freshman goalie ended the afternoon with seven saves.

As time continued to pass by, Fordham was throwing more players forward, leaving themselves more susceptible at the back. They conceded a free kick near their own penalty box, resulting in a free kick for Rhody.

Edven Akselsen chipped the ball into the box, and a lashing header by center back Tyler Dickson doubled the advantage for the Rams. It was his fourth goal of the season for the defender, who put in an all-around performance that drew high praise from his head coach Gareth Elliott.

“Tyler Dickson is a warrior,” Elliott said. “He’s an absolute warrior. Obviously defensively leading from the back and getting on the scoresheet on the other end is great for him as a senior and we are happy with him for sure.”

The score remained 2-0 for the rest of the contest, with Fordham not being able to pull a goal back. Asked after the match about the elements that led to the victory, Coach Elliot quickly pinpointed to the defense, saying “The defensive side of the ball was definitely the key [to the win].”

As a result of the win, URI will play VCU on Friday at 2 p.m. in the first semifinal matchup of the tournament. The winner of that game will play the victor of Dayton vs. George Mason, the other semifinal matchup held on Friday. The final will be held on Sunday in St. Louis, at a time to be determined.