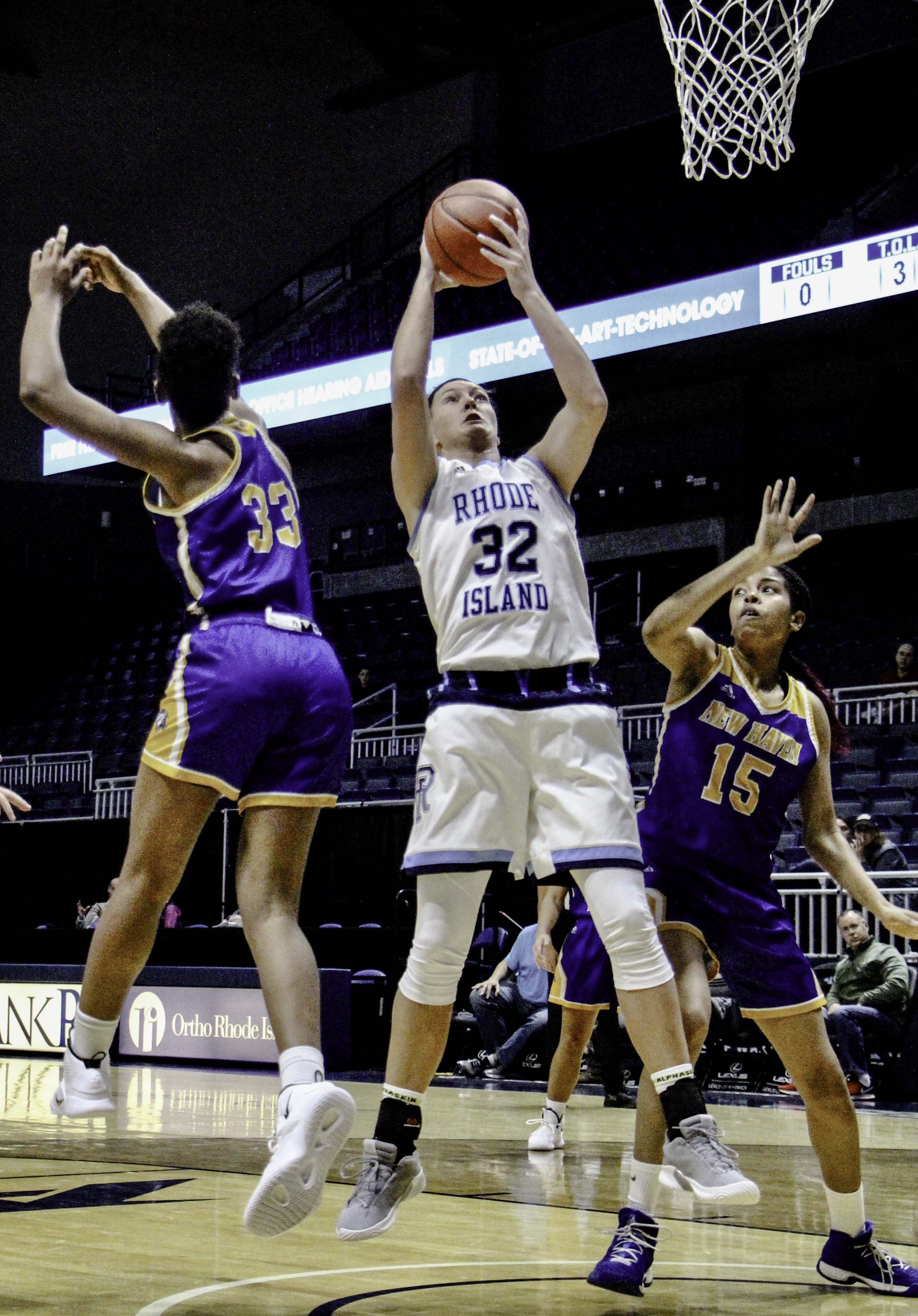 Photo by Greg Clark | Nicole Jorgensen goes up for a layup.

It started off slow for the University of Rhode Island Women’s Basketball team this past Sunday as they took on the University of New Haven Chargers in a preseason exhibition and what would turn into a 66-61 win for the Rams.

New Haven took action against the Rams in the first quarter as they would do their damage at the free throw line going a perfect eight for eight. Rhody, not wanting to start on the losing end, brought the first quarter score to 11-14 as sophomore guard Marta Vargas hit a pair of three-pointers.

It took the Ram’s almost six minutes to get a basket as they completed one at the 4:23 mark of the second quarter. Turning up the heat on defense and offense, the Rams would turn the drought into a 15-0 run giving them the lead. With help from frontcourt and backcourt, Rhody turned an 18-19 deficit to a 26-19 lead with less than 30 seconds remaining. The Chargers hit a pair of layups in the final seconds of the of half to close the Rhody lead to just 26-23.

With the rust of the offseason gone and a rebooting of the system, both teams were firing from all cylinders early on as they would both score 10 points in just the first four minutes of the second half. Rhody would not stop there with the scoring as they would continue with a quarter ending 17-3 run resulting in a 16 point lead going into the fourth quarter. Rhode Island was hot from behind the arc as they shot 55 percent.

New Haven struck first with trimming down the lead down to 10 after making a few quick shots within the first few minutes highlighted by a Camryn DeBose three-pointer. Still not wanting to give up and lose, the Chargers would work the lead down to just four points thanks to Alliyeah Cubbage jumper with three minutes to go. Unfortunately for the University of New Haven, Rhody wasn’t in the mood for giving up any more points as they would not give up the lead for the rest of the game.

When speaking to Coach La-Force she thinks that this year’s team is better than last year. She went on to say that sees that these girls are working better and harder along with being more aggressive. She really emphasizes that if you want it then you’ll get it but you’re out there as a team so you have to compete as a team.

The nonconference matchups coach La-Force said would be the biggest challenge for the Rams with teams like Kentucky and Clemson who run the ball well. She told me that if the team is really aggressive early on then later in the season they will be able to match up with other teams in the conference.

The Rams of URI open up the 2018-19 campaign with a home game Thursday at the Ryan Center as they face Boston College at 7 p.m.