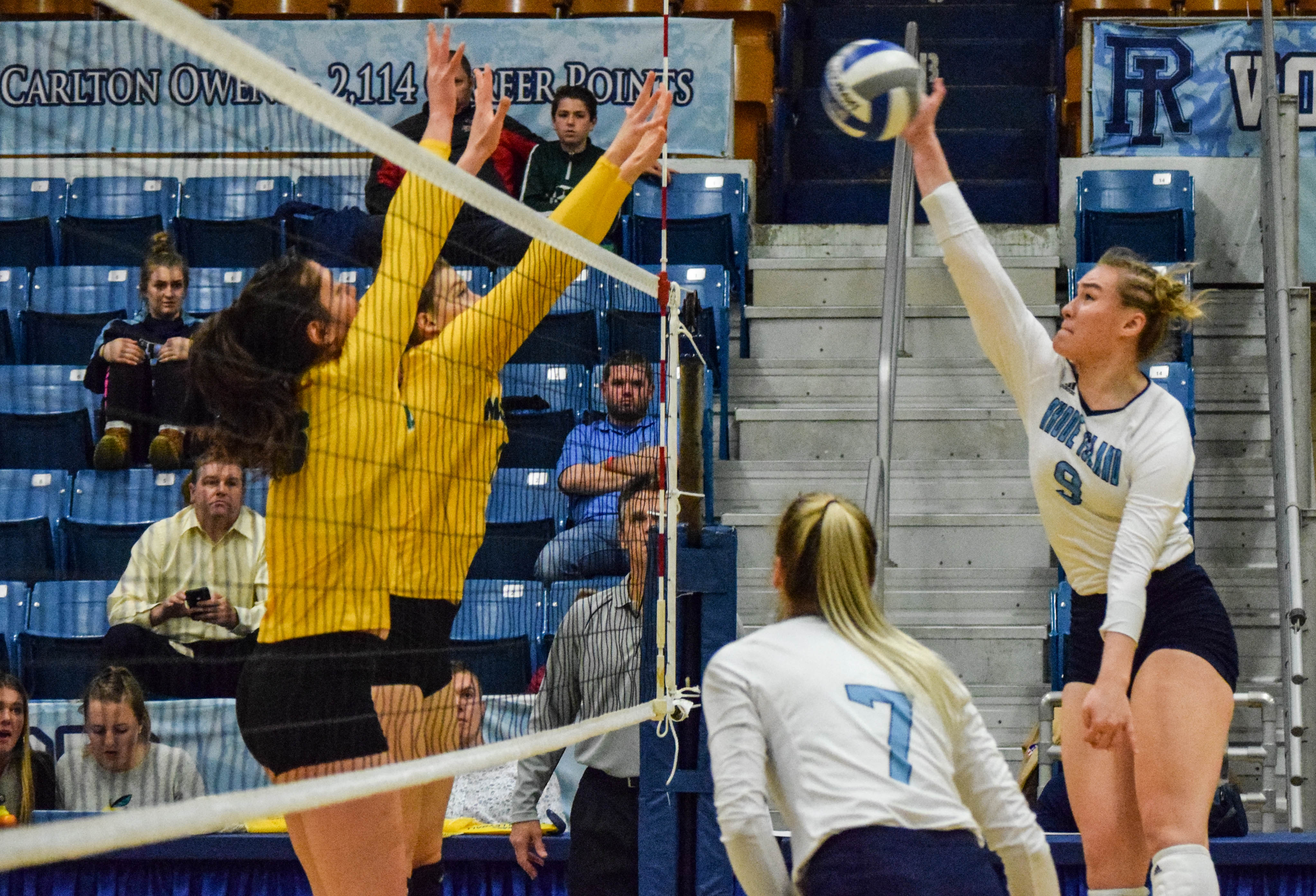 Photo by Anna Meassick | Mariah Paulette makes a move to spike the ball over the net.

This season wasn’t an easy season for Women’s Volleyball. They had ups and downs, but through it all, they always battled, and this weekend was a perfect example.

The regular season for Rhody Volleyball came to a close over the weekend on their home court. The Rams swept George Mason on Friday, Nov. 9.

Coach Steve Santonastaso reflected on the season and said, “I always enjoy watching our team compete. I love seeing them play and work together.”

Despite the sweep, George Mason always kept it close with Rhody. With the score tied 9-9 in the opening set, the Rams went on an 11-4 run to take command. Jenna McGuire’s defense helped lead the team to success. She was also named Atlantic 10 defensive player of the week prior to this victory. She combined with senior Lauren Pick on back-to-back blocks, then added a solo block to start the run.

The second set was tight throughout, with neither side leading by more than three points at any time. George Mason had set point at 26-25 but kills from Brown and Natale Zanellato followed by a block by Paulette gave the Rams the set 28-26.

Any change of a Patriot rally was squelched by Rhody late in the third. A Shilling kill put the Rams up 19-18, and URI never gave up the lead from there. Three kills by Brown, plus one from Paulette and Zanellato, helped Rhody win the third 25-22 and clinch the sweep.

On Saturday before the match against George Washington, URI held a brief ceremony to honor its three seniors: Mckenzie Kiesle, Lauren Pick and Olivia Budinich. In their season finale, Rhode Island battled George Washington through five sets but ultimately came up short. With the loss, Rhody ends the year with an overall record of 9-17 and a 3-11 mark in Atlantic 10 play.

The whole match was close from the get-go. The first set featured 10 lead changes and 18 ties, but it was George Washington coming out on top 29-27. The Rams erased an 8-1 deficit in the second set and won 25-20.

With the match tied 1-1, Rhody had set point (24-23) on another Colonial error. However, George Washington reeled off three points in a row to lock up the 26-24 win and pull ahead 2-1.

In the fourth set, back-to-back kills by Mariah Paulette and Natale Zanellato put Rhody back in front 20-19 and a Jenna McGuire kill later capped the 25-22 victory.

The fifth and final set was all the Colonials as they opened on a 9-3 run and never looked back. Rhode Island never able to pull ahead as George Washington cruised to the 15-9 win to claim the match three sets to two.

Seniors Lauren Pick and Olivia Budinich shined on Friday as their senior night was right around the corner. Pick had 37 assists and 11 digs, picking up an impressive double-double in a three-set match. Pick moved into eighth place in URI history with 1,732 assists. Senior Olivia Budinich had 12 digs, and with 1,037 career digs, Budinich is eighth all-time in program history. On Saturday, Kiesle finished with a career-high 11 kills. She also had three digs and three block assists and Budinich led URI with 22 digs, while also registering four assists and two aces.

“There’s not enough I can say about the seniors graduating,” Santonastaso said. “Four years of hard work and dedication. To see them go is difficult because we’re replacing a lot of experience. Even though it’s only three, it’s still significant.”

The Volleyball team started the season 0-4 and then climbed their way back to .500. The downfall of their season was October. The Rams had a 7-8 record going into the month but went on an eight-game losing streak. Rhody is losing three seniors to graduation which means they will have a strong returning team.

This offseason will be tough for the Rams as they look to improve next season.

“We’re going to spend a lot of time in the weight room,” Santonastaso said. “Getting stronger, jumping higher and moving quicker. Every day has to be about getting ready for the next season. I think we’re looking forward to some really great things in the fall.”