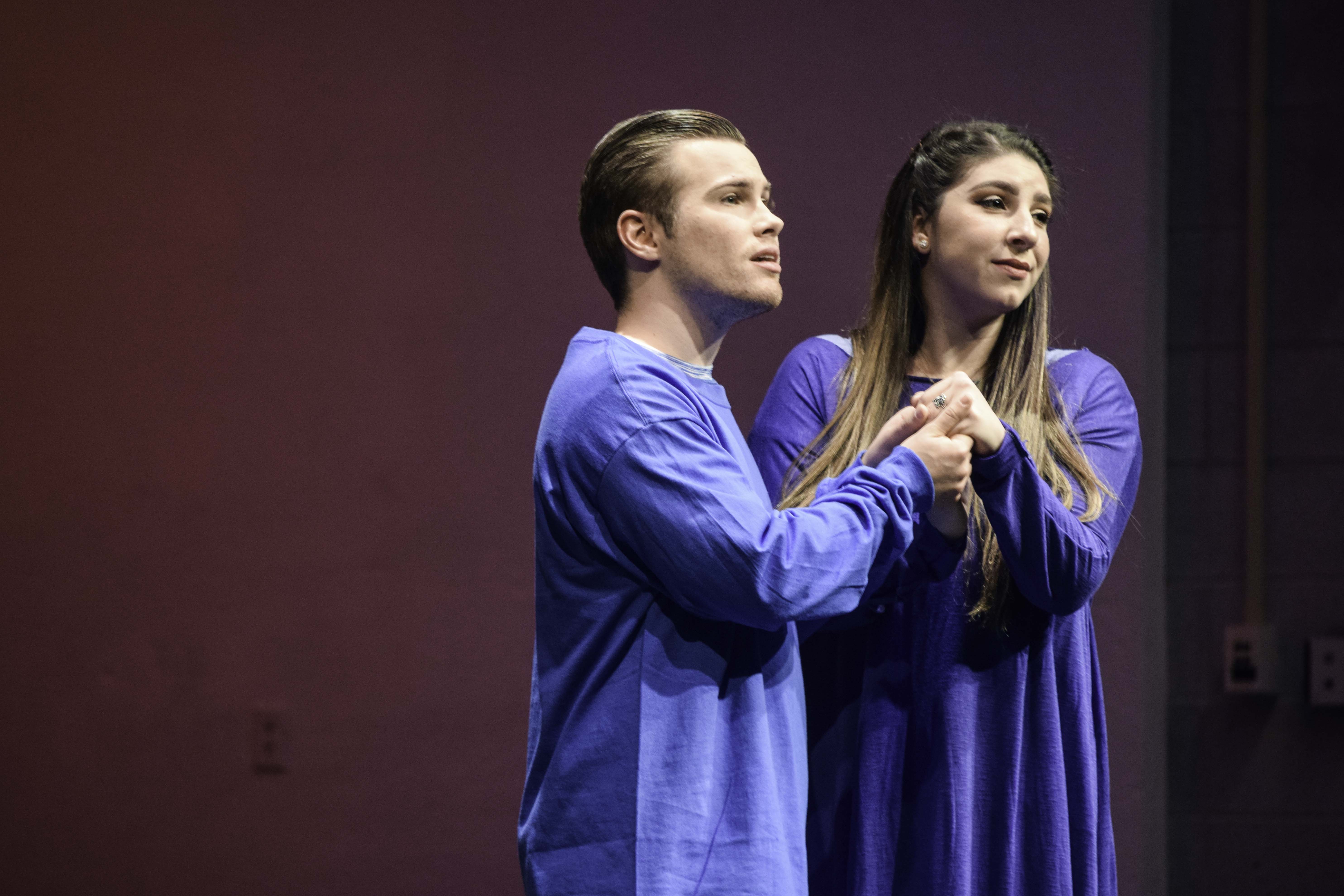 Photo by Anna Meassick | Brendon Lewis and Christina Nero perform “The Flock They Leave the Mountains” during the Opera Workshop.

The performance started with the musical work “Acis And Galatea,” by George Frideric Handel. Six songs were used to tell the Greek myth of the love between mortal Acis portrayed by Brendon Lewis and sea-nymph Galatea portrayed by Christina Nero. After the jealous Cyclops Polyphemus portrayed by Brandon Harris kills Acis, Acis is transformed into a fountain by Galatea.

“My piece was one of the most difficult pieces I have had to learn in my musical career so far,” said Harris on his song. “Learning the structure for memorization was a struggle. In the end, though, it was a great experience for learning.”

The singers who were a part of this first act were able to convey the emotions and story of “Acis and Galatea” almost entirely through their voices. Even for the audience members who had never heard of the story or had trouble following along could appreciate the story through the vocals of Nero’s sweet soprano, Lewis’s charming tenor and Harris’s strong bass. The closing song, “Mourn, All Ye Muses,” performed by the chorus, was so harmonic and beautiful that it nearly brought tears to the eyes of the audience.

The remaining pieces were from a variety of operas including “Carousel” and “Trouble in Tahiti.” The costumes of these performances were very intricate while still maintaining a minimal set just enough to tell a story, without distracting from the voices of the singers.

The voice of every performer was very distinct from one another, yet they all blended together very well, both with the other performers as well as with the scenes.

The Opera Workshop is a class at URI directed by René De La Garza in which students have to audition to get in. This recent performance was the group’s second performance of the year; the first showcased all music from the composer Leonard Bernstein, the man responsible for musicals such as “West Side Story” and “On the Town.”

Although their most recent performance was full of challenging songs, intricate costumes and creative staging the Opera Workshop had limited time to put the show together. “We only had a little over three weeks to work on the show. There was so much effort going into it,” said De La Garza.

It is clear that the students involved in the class are very passionate about what they do. After the performance, the singers were beaming with pride and happiness over the great show they had just put on. “Opera Workshop has been a really good experience,” said freshman Makayla Lane. “I absolutely love performing and this class in particular really helps me to get experience in my field.”

The audience included mostly family members and friends of the performers, yet the seats were not even half-way filled. Those in attendance, however, were in complete awe from the talent that projected from the stage. “Opera is really a great art form, it’s a living art form,” said De La Garza. “We have such great singers here, more people should definitely come to our shows and see them.” Opera is something that may not be an interest to many of the students or staff members at URI, but attending the next performance by the Opera Workshop is a recommendation many audience members and performers agree on.