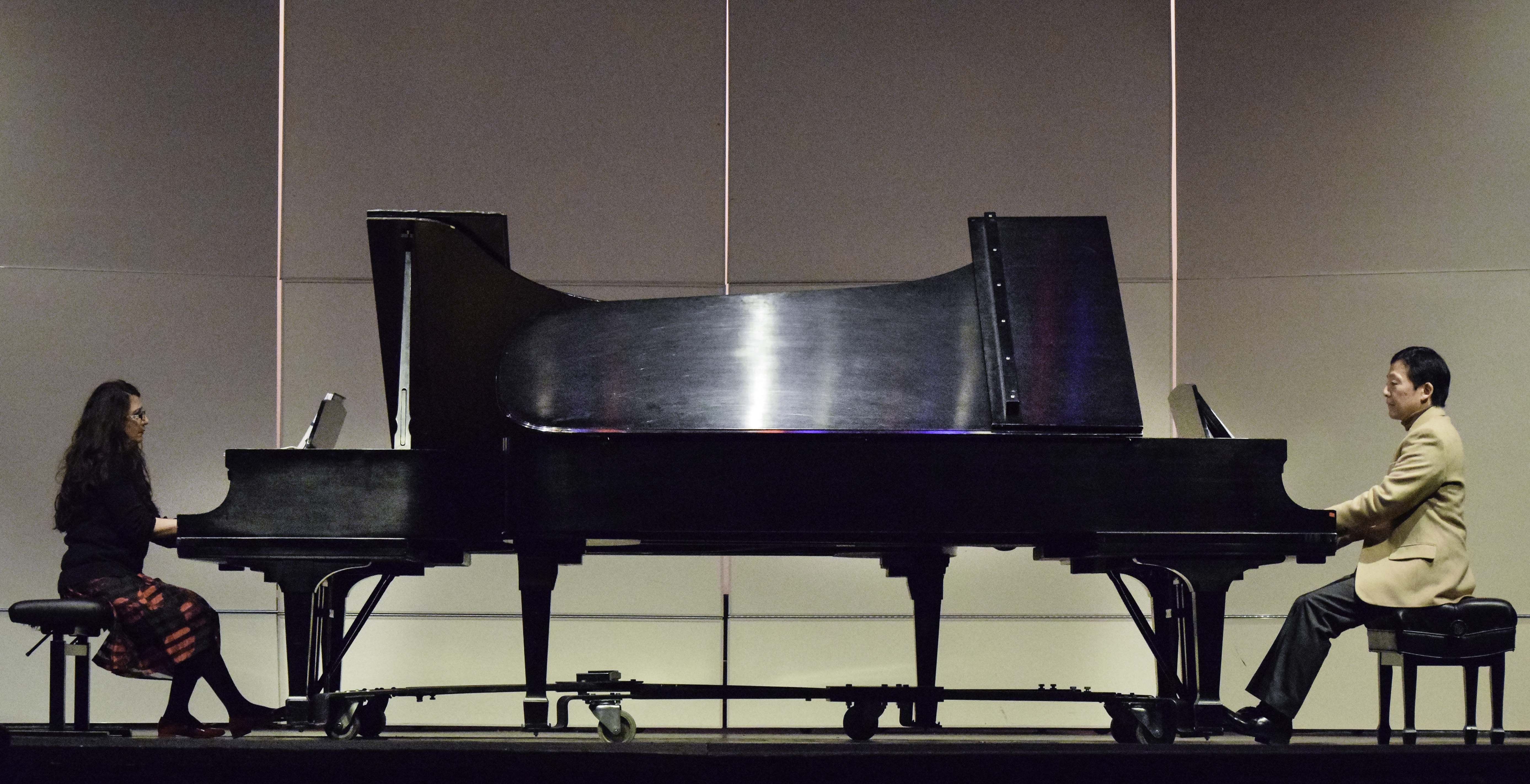 Anna Meassick | Professors Gayane Daraykan and Manabu Takasawa took the stage as the final act of the first music convocation of the semester performing a piano duet.

The University of Rhode Island’s Music Department has many different performances scheduled for all of the Rhode Island community to enjoy this semester.

“If they want to see what life is like day to day for a music major, then they want to come to our convocation on Thursday afternoons because that’s when our majors are starting to learn how to perform in front of an audience,” Conley said. “From their sophomore year on they are required to perform every semester in the convocation.”

Conley expressed that there are many types of performances the department holds. Besides the convocations, he explained that seniors also have their own recital every spring semester. He stated that these show students how it is when music majors are just about to step into the real world. Conley then proceeded to speak about some festivals that are occurring towards the end of the semester.

“We have a percussion festival where percussionists from around the region come and it’s a day-long event,” Conley said. “Sometimes they have lectures about Scottish drumming and things like that. There’s also a guitar festival and guitarists will come from all around to talk everything about acoustic classical guitar which is in April. This is a great opportunity to see what goes on behind the scenes.”

Conley expressed multiple times that no matter who it is, any person is welcome to come to any performance the music department puts on. He wants everyone to feel welcome to appreciate all of the music the department works on.

Nick Schleyer, a junior majoring in music education and performance, is pleased to promote some of the work students are doing outside of the music department.

“g. is a funky alternative rock band with students from URI,” Schleyer said. “They are performing at the Pump House Music Works on Feb. 7. Another concert is on April 13. I am having the first annual concert at the botanical gardens.”

Schleyer said that he wanted to do something different and that could make music a little more entertaining for everyone. He wants everyone to be able to this concert and enjoy music in new scenery.

“I’m going to have a bunch of different groups of musicians,” Schleyer said. “I will be hosting it and performing different pieces. I have never seen it done before and it is a really nice space with a stone stage so I decided I want to put an outside concert there. I will invite anyone to come.”

Schleyer looks forward to sharing his passion for music with the community and show what it means to him. By performing in different ensembles, he is given the opportunity to connect with his peers in a different way than others and that’s what he loves about being able to perform for all audiences.

“It’s just a wonderful experience of connecting with my audience and learning how to play with my friends,” Schleyer said. “We don’t have to speak in rehearsal or on stage to tell each other what to do. We can read each other like a book, we know what they’re going to do and if they throw a surprise at us, we’re ready.”

Both Schleyer and Conley expressed that any performance the music department puts on is for anyone. They encourage people to try out different performances to see which types of music they will like and just sit back, relax and enjoy music.

The next performance held by the music department, will be a voice and piano recital on Feb. 8 at 8 p.m. and anyone is welcome. The admission will be free and it is held in the Fine Arts Center.