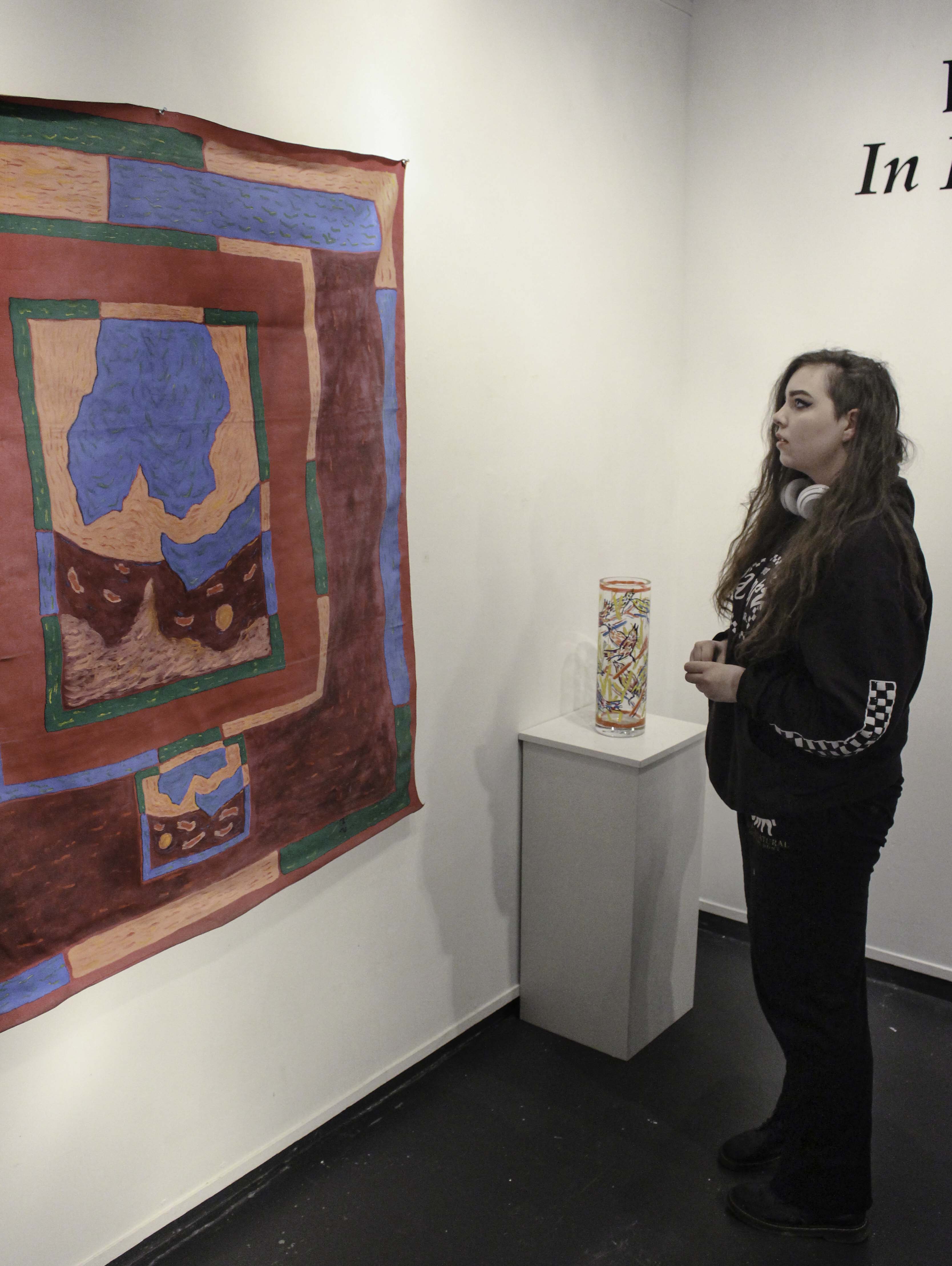 James McIntosh | A student observes artwork by Ernest Silva while it is on display in the Fine Arts Center.

In honor of late alumni, Ernest Silva, the University of Rhode Island’s department of art and art history is holding an art exhibit of a series of his works.

Silva attended URI from the late 1960s to the early 1970s receiving his B.F.A. and working under the instruction of Richard Calabro, a sculptor, Richard Frankel, a painter, and many others. After graduating from URI, Silva continued his education at the Tyler School of Art in Philadelphia, where he received his M.F.A. in 1974.

Deciding to move for work, Silva relocated to San Diego, California. Professor of art and architectural history and chair for the Department of Art and Art History at URI Ronald Onorato, said that Silva “combined teaching with practice and was on the faculty at the University of San Diego for over 30 years where he was called the cornerstone of the visual arts department by its chair.”

Onorato, who has recently taken over putting shows together in the project space in the Fine Arts Center, said that he has had the pleasure to showcase two renowned URI alumni this past year, including Silva, who has become one of the most successful URI graduates. Onorato said that he believes it is beneficial for students to see alumni who create art or have long careers in the art world because they stand out and are good models for students.

URI professors in the art department have been using the exhibit to show students the different ways to make art and help students expand their creative horizons. “The techniques and subjects open up students to new ideas,” Onorato said.

According to Onorato, Silva had strong family ties to Rhode Island and maintained relationships with professors and the college, periodically coming back and helping with different projects and classes professors were putting on. Although most of the professors Silva worked under have now retired, Onorato was able to get to know Silva before he passed away, saying that “he was a friend.”

Maintaining close relationships with many native Rhode Islanders, Onorato was able to find a bounty of Silva’s artwork from many people’s private collections and pieces Silva had given to the University and people in URI’s art department.

“Local people new of Ernie and it was easy to process because he was well known in the community,” Onorato said. “We focused on a lot of his work with painting and drawings.”

Along with these pieces, Silva’s wife, Susan Silva, gave a set of drawings and works to the Office of the Dean of the College of Arts & Sciences, Winifred Brownell, which are displayed in the show. “It’s a historical show,” Onorato said. “His artwork is vulnerable and the exhibit extends the memory of the artist.”

The following are all of the people the department would like to thank for lending and collecting Silva’s artwork: the College of Arts and Sciences; Winifred Brownell and the Office of the Dean; Susan Silva; Ben Anderson and Catherine Scanga; Ronald Onorato and Elisabeth Marchi; and Barbara Pagh and Jeff Bertwell.

The exhibit is located in Room A100 at the Fine Arts Center and the galleries hours run Monday through Thursday, 11 a.m. to 4 p.m.