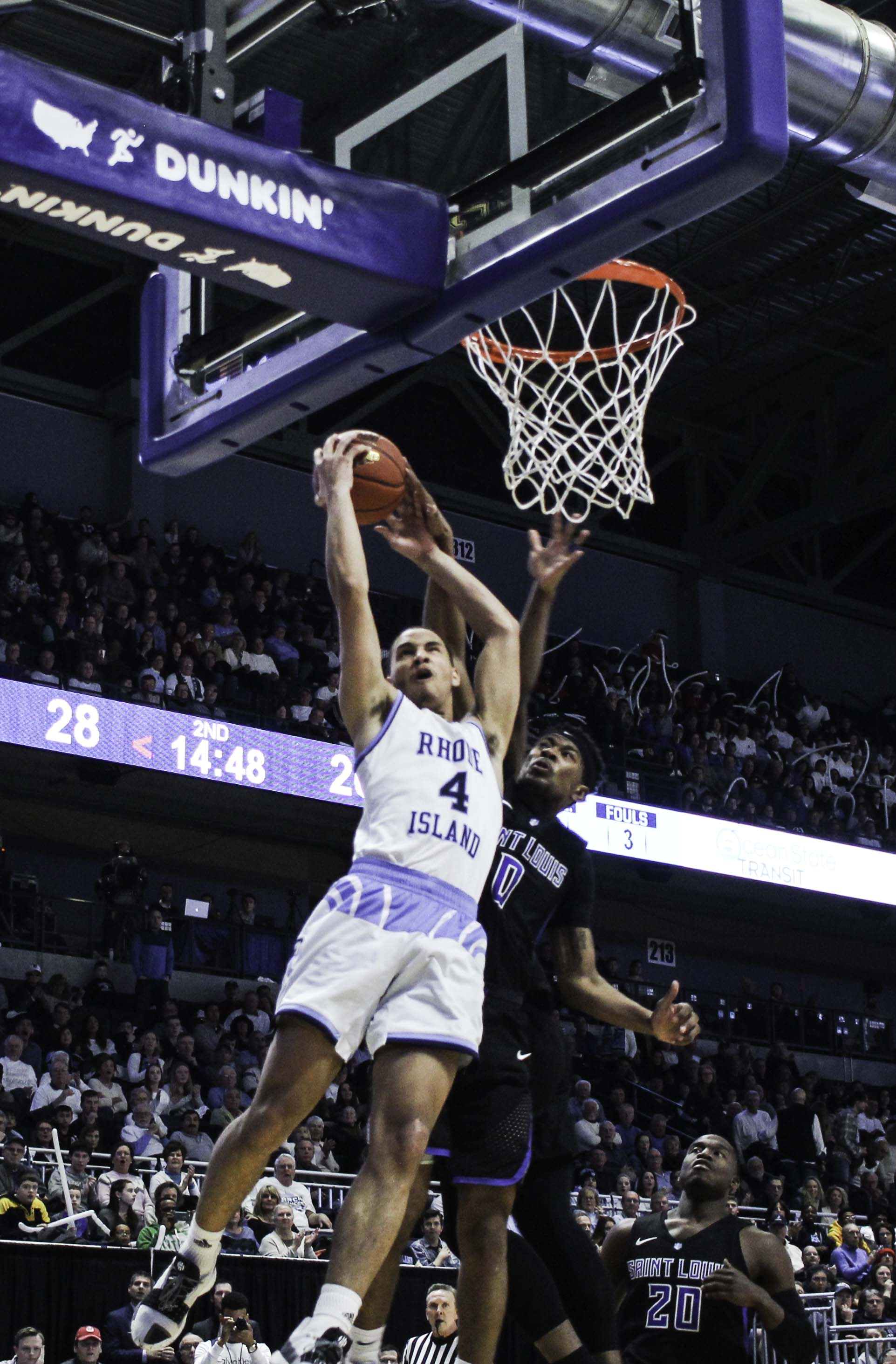 Greg Clark | Guard Tyrese Martin soars through are for a dunk.

Many people predicted that the University of Rhode Island men’s basketball team would be a talented team that would be prone to some missteps given their youth. This last week proved those pre-season sentiments to be correct come midseason, as the Rams went 1-2 in their last three games.

It started on Jan. 30 as Rhody traveled to Duquesne to take on the Dukes in a conference clash. The away team started out quick as they rolled out to a 41-22 lead at the half. Ball movement was a big factor in the first 20 minutes of game action, as URI held the advantage 11-3 in assists going into the break.

Unfortunately for the visitors, they could not continue the play shown earlier in the game. Duquesne went on a 16-2 run midway through the second half, retaking the lead 60-58 with six minutes left in the contest. A three by Tyrese Martin swung the lead back to the Rams, but it was the home side who made the plays when it counted most. Junior guard Jeff Dowtin got a good look from behind the arc, but his shot rattled off the back of the rim as URI fell 75-72 on the road.

Dowtin finished with 12 points, but the real star of the show was junior forward Cyril Langevine. He set a career high with 24 points to go along with eight rebounds in the losing effort.

One thing the team has been able to do this season is respond after a loss. They were 6-1 following a defeat heading into a home game vs. the St Louis Billikens, a squad Rhody had already lost to this season. The rematch proved to be a dandy.

The Billikens were successful in slowing down Langevine in the first half, as the junior was held scoreless in the frame. The big man, who finished with six points and four assists, knows that impacting the game isn’t just about scoring points. “This is the most assists I’ve ever had, but I’m just happy we got the win.”

Coach David Cox agreed with that assessment as he said “I know the stats don’t stay it but I thought Cyril had a monster game today. His defensive presence anchored us on the defensive end. URI went into the locker room up 24-20.”

A tight second half played out before the Rams were able to pull away towards the end of the game. Freshman Martin went up for a powerful one-hand jam with 1:27 remaining, before again rising up to hammer home an alley-oop assisted by Dowtin. Martin, who notched the first double-double of his career with 16 points and 10 rebounds showed little reaction about the highlight plays. He said postgame “I’m just an even-keeled type of guy. [Downtin] was trying to get me going but the game wasn’t over.” Rhody went on to win 65-54.

The Rams hit the road again this past Wednesday as they traveled down to North Carolina to take on the Davidson Wildcats. Davidson came into the game in first place in the A-10 with a 7-1 record. Rhody got off to a slow start shooting going 0-12 from the field. Cox and company couldn’t recover and fell to the Wildcats 68-53.

URI came back and made it a three point game at the half but could only hold off the potent offense of Davidson for so long. The Wildcats shot 53.8 percent from the field in the second half and also connected on six shots from deep.

Cyril Langevine had a terrific outing despite the loss as he posted another double-double with 16 points and 14 rebounds. Dowtin was able to reach double digit scoring for the 24th consecutive game.

The loss dropped the defending Atlantic 10 champions to 5-5 in conference play and to an overall record of 12-10.

URI is back in action this Saturday when they host the University of Dayton at the Ryan Center. Tip Off is scheduled for 4 p.m.