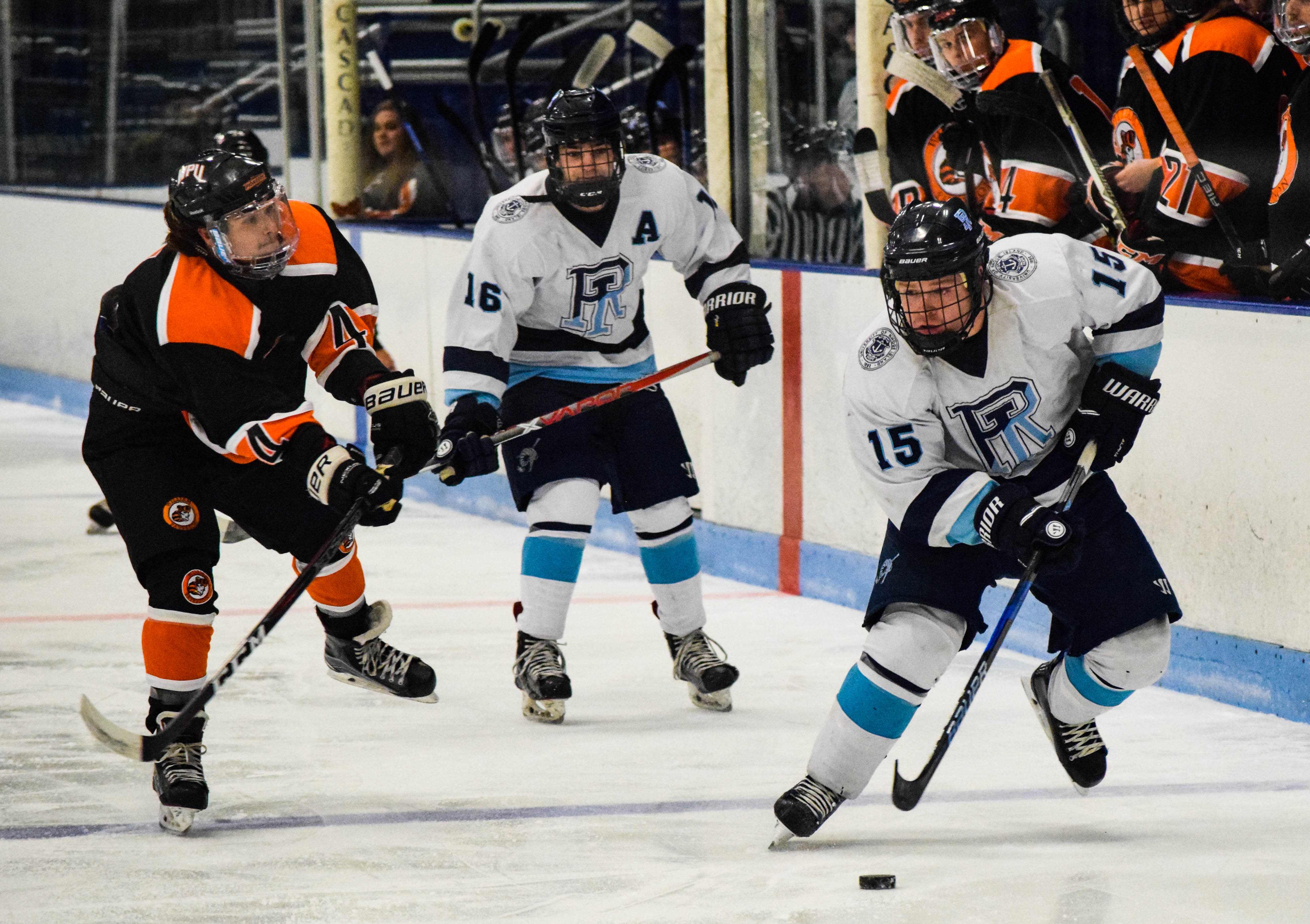 Anna | URI’s Patrick Creamer pushes the puck down the ice in a game last semester.

Dan Hurley, David Cox, Raphael Cerrato, Daynia La-Force, Gareth Elliott. These head coaches are all well known in and around the University of Rhode Island community. From those five coaches, if you add up their total games coached at URI, their combined number barely eclipses half of what URI Men’s Ice Hockey coach Joe Augustine has done during his tenure behind the Rams bench; 1000 games coached for the Keaney Blue.

Second in games coached at URI to Frank Keaney alone (a man who coached football, basketball and baseball), Joe Augustine has been a mainstay at URI for 30 years. On Jan. 20, coach Augustine passed 1,000 games coached for URI. In his three decades behind the Rams bench he’s compiled over 600 wins, winning an ACHA National Title in 2005-2006, two ACHA coach of the year awards and getting to represent America as a coach in the World University Games in 2009.

For all that Augustine has accomplished, however, he’ll be the first to tell you that his players have played an integral role in his success.

“We’ve had a lot of good people come through our program,” said Augustine. “Obviously the program is not a coach or coaches or staff, programs are players.”

Many of Augustine’s former players came back to celebrate when he was honored on Jan. 26 for reaching the 1,000 game mark. Also in attendance that night was Brad Boss, for whom the rink in which the Rams play is named after. Other attendees included URI Vice

Augustine has had a long and storied career in hockey. He attended Boston College, playing three years before turning pro, where he was picked in both the World Hockey Association and National Hockey League drafts in 1975. However, despite playing hockey at such a high level, Augustine got a taste for coaching during his high school years, which he credits as a major contributor to his coaching achievements.

Augustine enjoyed several years at the pro level, however, after his retirement from the game in 1983 he returned to a position behind the bench. In Augustine’s own words, he’s said that the time has flown by.

“Honestly it’s been one season at a time, one game at a time. Turn around and 30 years are gone,” said Augustine.

In his 30 years as a head coach, Augustine has had countless players and coaches pour through his system. This season, a former player and recent URI Graduate, Ray Boudiette returned to the team as an assistant coach, looking to help Augustine with the next generation of Rams hockey.

“It speaks to how good he is at what he does, it’s not just a thousand games its 650 wins in 30 years, that’s unheard of,” said Boudiette.

As Augustine looks back on his seemingly endless list of accolades and accomplishments, Augustine openly admitted that one of them frustrated him; there’s only one banner in the Boss Ice Arena.

“I’m just disappointed that we haven’t done more here in that department,” said Augustine. “When you see the guys and they win they all have that special bond… I wish all our guys could have that feeling.”