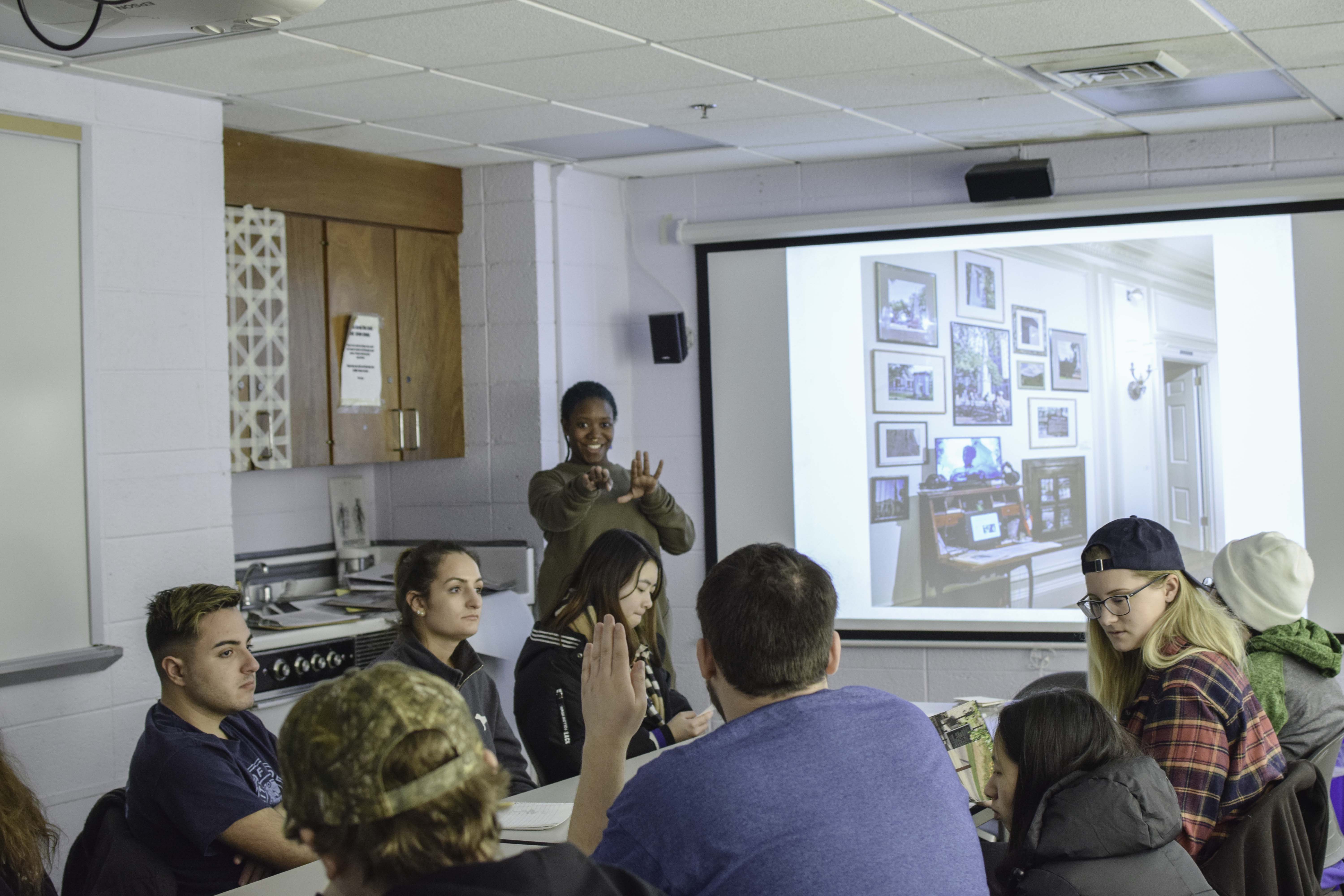 Becci Davis shared her art installation on the voices lost due to Confederate monuments. Photo by Joseph Lachance.

Multimedia Artist Becci Davis, presented her multi-media site specific art installation on Confederate monuments in Georgia on Feb. 19 in the Fine Arts Center. This art installation features the voices that have been lost, forgotten, silenced or erased through the these monuments.

She was born and raised in Georgia and wanted to create an interactactive art installation that was dedicated to a location she felt a deep connection to.

Home to many Confederate monuments, hailing the accomplishments or masking confederate generals as martyrs, Georgia continues to preserve the ideologies behind the confederacy during the Civil War.

“Monuments are a pact you make with the future,” Davis said, who saw their problematic nature and upkeep as proof that something had to be done with the monuments to show everyone the true nature behind them.

“They perpetuate the value of the Confederacy,” Davis said. “It’s disturbing to me because its been completely normalized by the people in Georgia. How you can you heal something if you don’t acknowledge that there is something to be healed?”

For the first part of her project, Davis said, “I sat in the shadows of the monuments and would write postcards to government officials in office.”

Davis made over 1,000 postcards and sent two to each politician in Georgia. In the postcards, Davis announced her connection to the area; each place she chose was an area where she had grown up or where her family and friends lived.

Along with showing her deep but complicated relationship to the location, Davis asked the politicians to acknowledge the monuments problematic nature in their description, rather than hailing them as American heros, hoping to spark a change in the way the state views them.

The postcards she made had collages of photos of the monuments, along with quotes from the description of the monument, which portrayed their racist content. Davis said that she wanted to show the politicians she was writing to that she was not just someone from up north who was telling them what to do.

“I was very careful not to make them carbon copies of each other,” Davis said, saying that she wanted to put personal touches in each one.

When students asked Davis about her overall goal of the art installation, Davis said that she is trying to tell the stories of people who were, and still are, negatively affected by the Confederate and Georgian political views on African-American lives, and spread the voices from those who have been treated inferior and unequal and whose voices and opinions have been ignored.

Nicholas Costa, a senior student in attendance, said, “I think it’s important for us to acknowledge the historical events and the negativity behind them – what she’s doing is really cool.”

Jacob Richman, an art instructor at URI, was one of the professors Davis had when she attended URI a little over three years ago. Richman’s class, ART 316 – Video and Multimedia Installation, which focuses on site-specific multimedia, was the class that Davis credits to where she was introduced to video and visual space and the tools needed for time based exhibits, thus being very impactful to her current artwork.

At the end of Davis’s presentation, she handed out postcards to students, saying that they can write a postcard to politicians as well if they felt inclined to.

“Part of the project is to encourage others to send postcards as well,” Davis said.