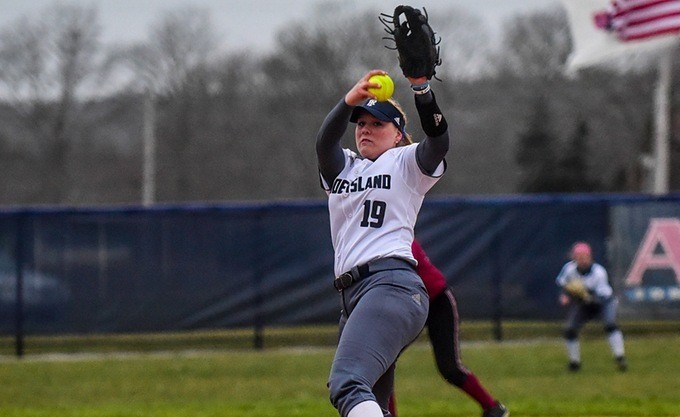 Senior pitcher Julia Waraksy gave up six runs in seven innings pitched this past weekend in softballs first road-trip of the season. Photo courtsey of GoRhody.

The University of Rhode Island women’s softball team kicked off the 2019 season playing five games in the Fairfield Inn and Suites Seahawk Softball Bash hosted by the University of North Carolina-Wilmington this past weekend.

The season began on Friday, Feb. 15 at 10 a.m. when URI faced Howard University. The Rams started senior Becca Rogers against the Bison and she allowed just two hits while striking out six and walking one of the 20 batters she faced. Head Coach Bridget Hurlman said the key to Rogers success in this game was the spin on her pitches.

“She threw the ball well,” Hurlman said. “She spun the ball good and got a lot of swings and misses.”

The Rams totaled seven hits and four runs in the bottom of the fourth inning and added three more in the fifth. Seven Rams collected a hit with freshmen Ari Castillo and Faith Musselwhite each driving in a run and junior Erika Yeager driving in two more. The Rams went up 8-0 in the sixth inning and won the game by forcing the eight run rule.

In their second game of the day the Rams took on the Radford University Highlanders. Junior Sarah Gunderson started the game and lasted three innings giving up three earned runs, seven hits and striking out two. Senior Julia Waraksy relieved her for the last four innings and surrendered four earned runs on six hits. The Highlanders outlasted the Rams 7-1.

The Rams then played Saturday at 4 p.m. against the host team, the UNC-Wilmington Seahawks. Rogers started her second game of the season going against junior Rylee Pate for the Seahawks. The Rams were the first to score as they went up 2-0 in the top of the second inning when freshman outfielder Sami Villarreal doubled to drive in junior Caileigh Holland and Yeager.

In the bottom of the fourth Seahawks senior Anna Hessenthaler hit home run, giving them a 3-2 lead. This lead was short lived, as in the fifth inning the Rams took it back with a home run from junior Erica Robles making the score 4-3. In the bottom of the fifth the Seahawks scored five runs off of a home run by sophomore Carson Shane, a double from Hessenthaler and a RBI single from senior Kali Jones to take an 8-4 lead.

In the top of the sixth the Rams scored twice on RBI singles from Villarreal and Robles. The scoring stopped there as the Seahawks closed out the game without surrendering another run, winning 8-6.

The day wasn’t over for the Rams as they faced Radford University for a second time. This time the Rams defeated the Highlanders 4-3. Sophomore Riley Kernan pitched her first career complete game and earned her first win this season. Hurlman liked what she saw from Kernan.

“Her off-speed was working, it kept hitters off balance,” said Hurlman.

The Highlanders scored first in the top of the second inning to take an early 1-0 lead but Rams got on the scoreboard in the bottom of the fifth inning when senior Rebecca Simms scored on an error by the right fielder.

The scoring continued when senior Adriana Toro hit a two run double to give the Rams a 3-1 lead after five innings. In the top of the sixth the Highlanders tied it at three. The Rams responded in the bottom of the inning when Musselwhite doubled and Robles scored to put them up 4-3 and they held on for their second victory of the season.

Down by six, the Rams began to battle back. Robles provided an RBI single while Musselwhite hit her second home run of the game, driving in three to cut the deficit to two. The Seahawks added one more in the bottom of the fifth and won the game 9-6.

Coach Hurlman was pleased with the hitting and pitching but said the defense needs to improve.

“As a whole, I’m incredibly pleased with the offense and pitching,” Hurlman said. “I’d like to see less errors on defense, be a little bit more clean.”

Hurlman was also impressed with freshmen Villarreal and Musselwhite who both batted .533 over the five games. The Rams are back in action this weekend as they will participate in the Cardinal Classic at Lamar University in Beaumont, Texas.