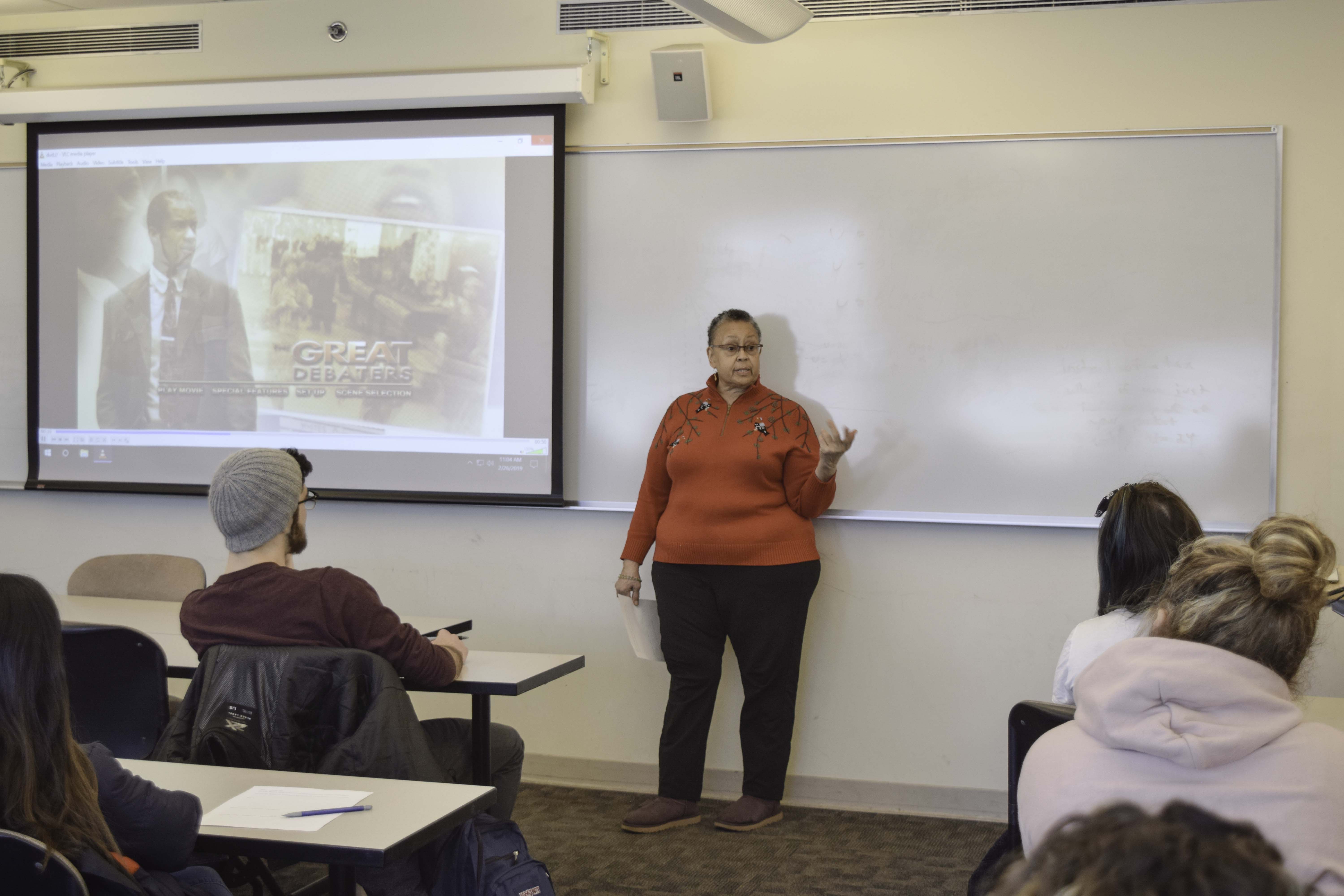 Professor Earline Ferguson introduces a documentary to her students, providing them with background information. Photo by Anna Meassick.

University of Rhode Island Professor Dr. Earline “Rae” Ferguson has had such an interesting life — someone should write a book about it, which is exactly what she’s doing.

Ferguson’s memoir will focus on her years as a child growing up in Cold War Germany, but those who are fortunate enough to wind up in her classroom know that she has many, many more inspiring stories to share.

Ferguson began teaching at the University in 2000, but her road to Rhode Island is a long and windy one that began in New York, where she was born. In 1947, when she was just 11 months old, her family moved to Germany. Germany at the time she grew up there was recovering from World War II.

Looking back on the move, Ferguson called it an “odd choice.” Despite the fact that Germany was grappling with its own battles, her mother did not want to raise her in the time of Jim Crow in the United States. Although she moved to Germany soon after birth, Ferguson refers to herself as a “product of the Jim Crow era.”

“This was really the first time I thought about race,” Ferguson said.

This was despite her mother’s efforts to keep her sheltered from the segregation in the south at the time.

The solution her mother came up with was sending her to a military school which meant that every morning, Ferguson left home from at about 3 a.m. to ride a military van with about six or seven other kids to go to the integrated school about 90 miles away. She would not return home at night until 9 p.m.

“For me, it was like a huge adventure,” Ferguson said. “I was going somewhere without my mom, who watched over me like a hawk.”

The adventure only lasted for a few months before her mother sent her to live with her grandmother in Baltimore for the rest of the school year. After that, they all went back to Germany, but she had gotten, for the first time, to experience American school.

This experience helped spark her curiosity and love for research.

“As a child growing up overseas, I always wondered why people of different cultures taught the same thing from very different perspectives,” she said. “You’re always comparing what you know about the U.S. to what you’re seeing and experiencing here. So, history was a good fit for me.”

Still, history is not the only department she teaches in at URI. Ferguson also teaches classes in Africana studies and gender and women studies.

“She’s not just important to our department,” Professor Rod Mather, chair of the history department said of Ferguson. “She is important to the University at large.”

He praised her for her variety in teaching and her interest in artistic expression.

After third grade, the next time Ferguson returned to the States for schooling was when she was a college student. This was the 1960s and education for her was quite different than what it is today.

“What most of my students today take for granted didn’t exist when I first went to college,” Ferguson said. “In the 60s, very few people like me would’ve been teaching at a state institution, from my background, from any other background that wasn’t that middle class or upper class raised to be the future leaders of America.”

As a student at Indiana University, even on the urban campus there were very few students of color or identifiable minorities around her.

“As a student there, it was like being a drop in a bucket,” Ferguson said.

Ferguson’s own experiences as a student helped shape her view on education and its importance. As she said, “the most important reason to go to school [is] because it’s the one time in life that people are supporting you, finding out about yourself in relation to all the other stuff you’re learning.”

This is what she wants her own students to know and learn as well through their educational experience. She wants them to know that it is more about college than just getting a job upon graduation.

“These years you have in school, that’s the time to dive in as deep as you can because all that stuff we study, the ideas and stuff, they are connected to your life in some way,” Ferguson said. “The more you know, the better you understand your own life and what’s going on around you.”