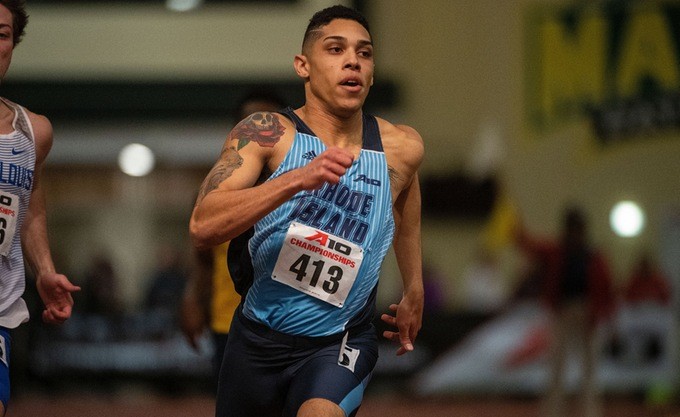 The University of Rhode Island men’s track and field team placed second in the Atlantic 10 Indoor Track and Field championship last Sunday, and eighth in the Intercollegiate Association of Amateur Athletes of America championship this weekend.

The A-10 was held on Feb. 23-24 and was hosted at George Mason University in Fairfax, Virginia. URI finished in second with a total of 99 points. George Mason finished in first with 175 points.

URI had several accomplishments for day one, the most notable being Thomas Vardis placing first in the weight throw. It was his best throw of his entire career, with a length of 19.21 meters and was the first time he placed first in this specific competition.

Jonathan Buchanan placed seventh with a throw of 16.34 meters. Ryan Wilkes placed an impressive third in the pole vault, with a mark of 4.80 meters. Meanwhile, Jack Reichenbach placed second in the long jump with a leap of 6.92 meters and Trevor Rooney marking 6.66 meters for eighth. Both earned points for the event.

This weekend, URI participated in the IC4A championship, which is the oldest track conference in the USA. It was hosted by Boston University on March 2-3. URI finished eighth in this event, scoring 28 points in 20 competitions.

Some URI accomplishments included Delasanta, who finished third in the 400 meter with a time of 47.13 seconds. McGriff was fourth in the 500-meter final with a time of 1:03.84. Kellen Watters finished fifth in the 1000 meter final in 2:25.79, which is the third fastest time in URI history.

Meanwhile, the distance medley relay team of Coogan, Ross, Carlson and Fortna finished fourth in the with a time of 9:56.03.

Coach Copeland, when asked about the two competitions, said he was very pleased about his players and the records they set.

“They competed very well,” he said.

When asked about the most valuable players this weekend, he said, “Tom Vadis and Anthony Delasanta, considering they were champions at the A-10 and finished second and third in this week’s competitions.”

However, he was proud of his whole team.

“Four of our guys ran their personal best times,” Copeland said, “Now we’re gearing up for the outdoor season,” which will take place until the end of May.

When asked about how he felt about it, he said, “I’m pretty confident. I mean, we’ve had a lot of success over the years. We’ve finished either first or second in the last few years in the A-10 outdoor championship.”