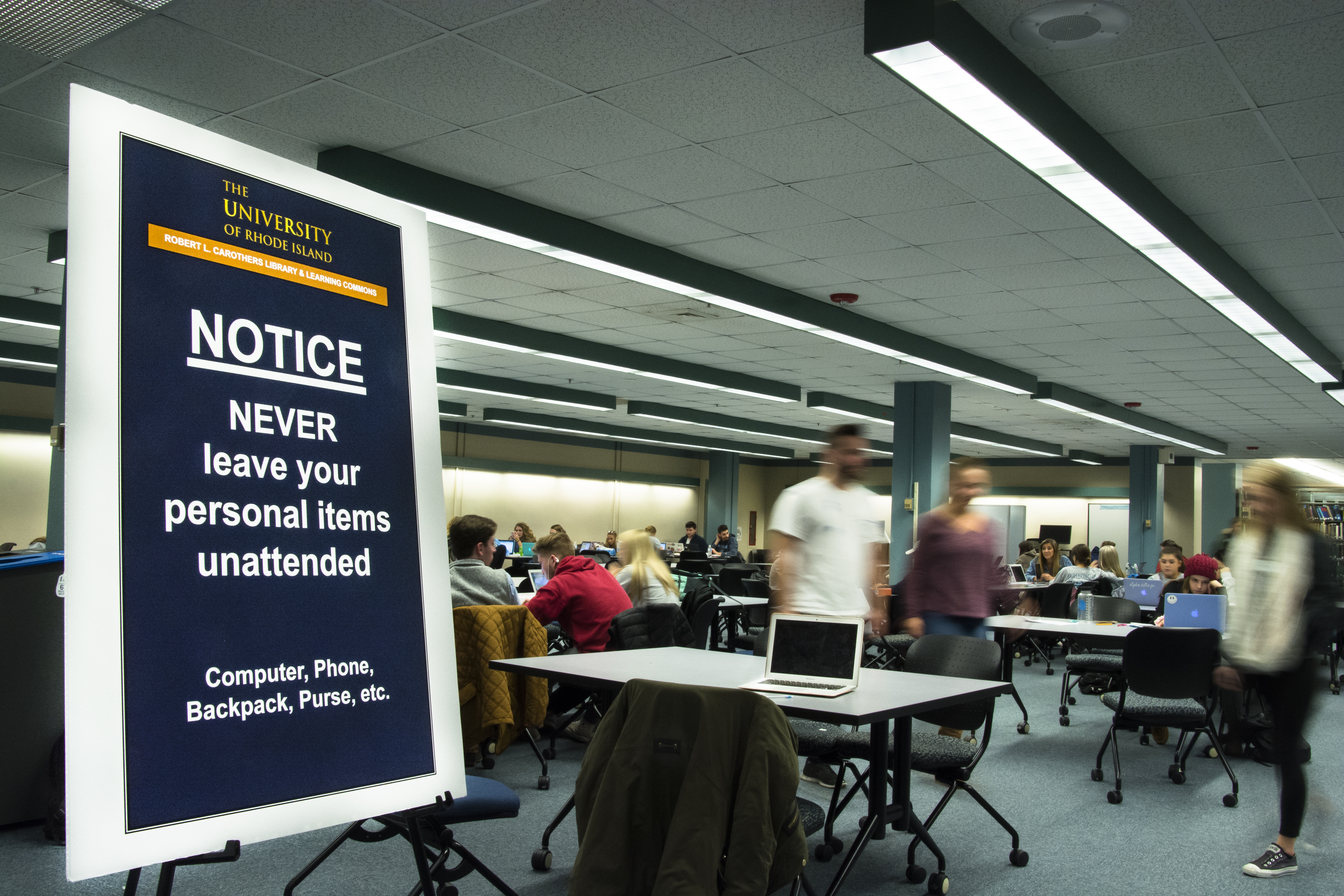 A laptop thief wreaked havoc on students who left their laptops unattended in the library beginning in the fall semester of 2017, stealing the laptops to later sell. Photo by Autumn Walter.

by Julia Moro and Mary Lind

Providence residents Marquis Coleman and Anwar Bonilla are facing charges related to the series of laptop thefts that occurred at the University of Rhode Island library last academic year.

According to URI Police Department Capt. Michael Chalek, most of the laptops stolen were confined to the third floor of the library. URI police said that Coleman was a student at one point, but at the time he was caught he was not enrolled at URI. At the time of the thefts, Coleman was staying in a dorm on campus with a friend.

The URI police department was able to get a picture of the suspect stealing a laptop with the cameras they had placed in the library. From there, they got a description of the suspect, and URI Police Officer Anthony Brito said he knew what to look for: A black male, with a unique book bag, Ugg boots a hat.

“[I was] kind of mad,” said Brito. “This was people’s lives and their laptops, their future and important documents.”

On February 18, 2018, the police department received a phone call of a stolen laptop and went to the library and searched to find the suspect that matched the description. Brito said they looked around the building and didn’t find Coleman, who was the suspect.

According to Brito, he stayed to stake out the library while other officers went to gather more information, write the police report and respond to other calls. Brito surveilled the area where the suspect was reportedly seen. According to Brito, the suspect was seen going towards Garrahy Hall and Wiley Hall. Brito then backed his police cruiser into the loading dock by White Hall and waited.

“Policing is basically just a waiting game,” Brito said. “I waited and said to myself, ‘Tonight’s the night, I’m going to grab this guy and put a stop to this.’”

Brito said around 8 p.m. or 9 p.m., he saw a man matching the description. When Brito asked for the suspect’s identification, which is the police department’s policy, he provided his friend’s identification. As Brito engaged the suspect in conversation, he recognized the book bag that matched the one seen in the photo the police obtained.

“The book bag was the key for this whole investigation,” said Brito.

According to Brito, Coleman didn’t close the book bag and a computer and cables were visible. Brito then asked if the laptop was his, and Coleman confessed. Brito then took Coleman into custody. “It took a lot to catch this guy,” said Brito. “Me being right out of the academy, I was ecstatic.”

Brito was hired back in December of 2016.

“[Brito] was a young officer, he’s only been with us a couple of years,” said Chalek. “He was not going to let this guy get away. He was very committed to going out there and tracking this guy down. I’ve really got to commend him for a job very well done.”

When the suspect was brought into the police station, they seized his phone and got a search warrant for the phone. They were then able to determine that Coleman was selling the laptops to Bonilla.

Brito then went undercover to bring in Bonilla. According to Brito, he sent Bonilla photos of the computer’s, pretending to be Coleman’s friend. Brito said the next day, he bought a burner phone to communicate with Bonilla. That night, Brito dressed in normal clothing to meet with Bonilla down by the Ryan Center. When Bonilla pulled up in his car and Brito made a description, Brito then signaled the police to move in and block him from leaving.

Brito estimated that police department spent around three or four months staking out the library before Coleman was caught.

According to Chalek, Police Sgt. Erica Vieira was put in charge of the investigation.

“Sergeant Vieira and Detective [Mark] Brasil really did the lion’s share of the legwork putting all this together,” said Chalek. “I really commend the officers that conducted the investigation. Sergeant Vieira put a lot of time and effort into this. She worked very very hard, as did Detective Brasil.”