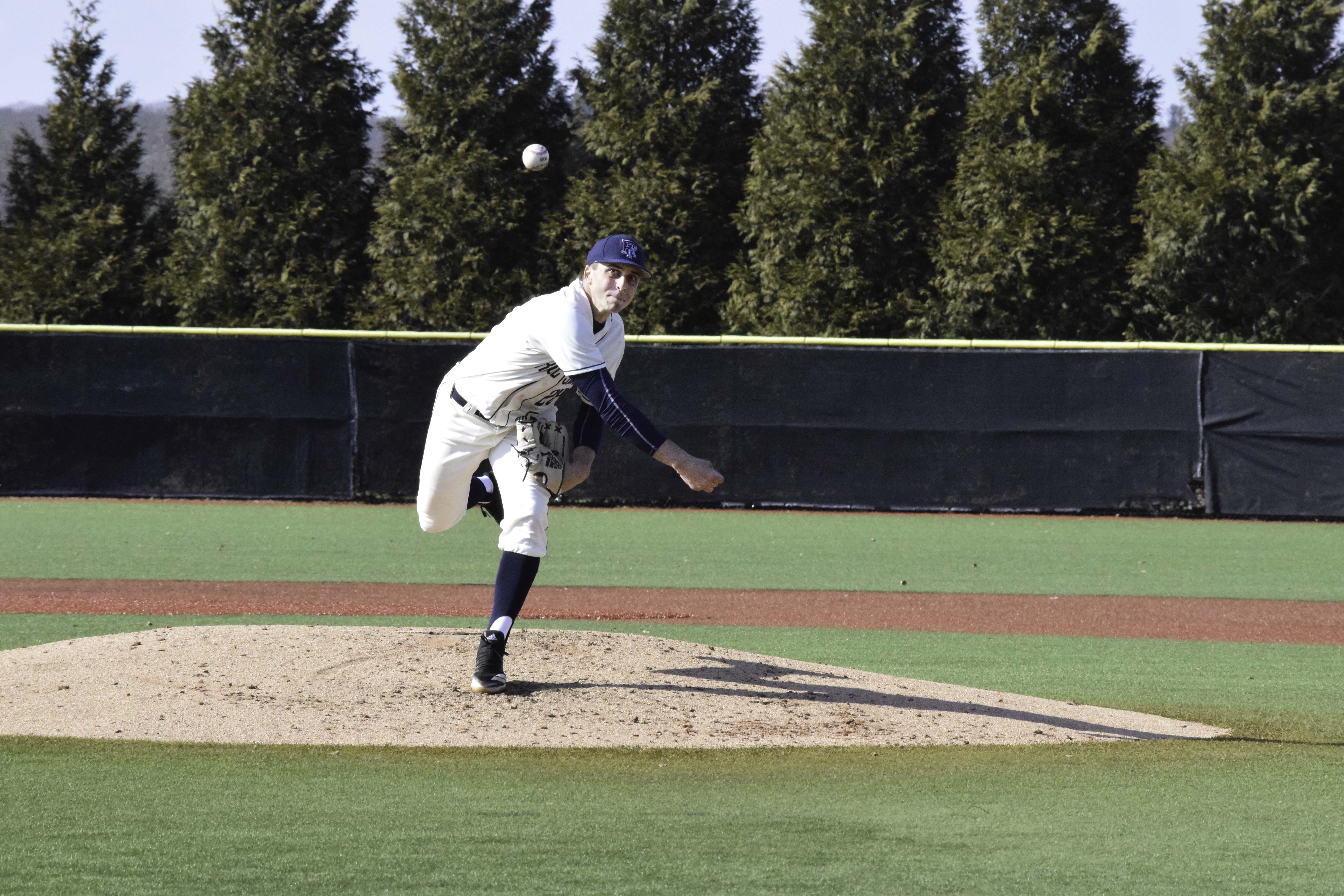 Team wins two of three games against George Washington this past weekend.

Jangols throws the pitch as he faces off against the Pioneer batter. Photo by Anna .

Atlantic 10 conference play began this past weekend for Rhody baseball, and the team was more than ready for their first game against George Washington University, winning by a score of 19-1.

The Rams and Colonials played two and a third innings on Friday afternoon, but a hail storm eventually rendered the Tucker Field unplayable. When play was halted, Rhody led 3-0 thanks to a two-run homer by Jackson Coutts and an RBI single by Greg Cavaliere.

The overnight pause in play did not derail the Rams’ offense as URI strung together a season-high 20 hits, six of which were for extra bases. Coutts’ homer was his first of the season while Mark Coley belted the first of his career in an eighth-inning pinch-hit at-bat.

Head Coach Raphael Cerrato was very pleased with how his team started strong and applied that same intensity after the delay.

“We jumped on them early,” he said. “When we came back (after the delay) we really kept the petal on and put up a bunch of runs. We swung the bat really well.”

Each of the seventeen Rams that recorded plate appearances reached base at least once. Xavier Vargas led the way with a four-for-five showing at the plate. He and Kevin Heiss each scored three runs for URI. John Cristino, Mark Coley, Laurence Hill, Coutts, Josh Brodeur and Greg Cavaliere all drove in multiple runs.

The second game of the day was a different story for URI at the plate. After their offensive outburst for 19 runs, the Rhody bats were kept in check for game two as URI combined for just seven hits through nine innings.

With GW leading 1-0, an RBI single by Hill evened the score in the top of the third. Rhode Island pulled ahead 2-1 the following inning on a solo shot by Max Mircovich, but the lead was short lived as the Colonials responded with two runs in the bottom of the frame and another in the fifth for a 4-2 advantage.

Hill drove in Brodeur in the seventh to make it a one-run game and the Rams threatened with runners on second and third in the eighth, but were unable to push any additional runs across. The score final score remained 4-3 as the Colonials were just able to hold on.

“We hit the ball pretty well and played a good game,” said Cerrato. “It was kind of frustrating because we played well and we didn’t do anything wrong. We could’ve easily put up seven or eight runs but that’s just baseball.”

Over the two games Vargas stood out with his bat as he combined to go five-for-eight. He also scored three runs for the Rams.

“Xavier is getting hits, he’s putting the ball in play, he’s giving us good , And defensively he’s phenomenal,” Cerrato said. “I think he’s the best defensive first baseman in the league. Our infielders have confidence throwing the ball over because he picks everything. He’s an excellent overall player.”

Rhode Island opened game three on Sunday just how they wanted to, putting runs on the board in each of the first three innings. It all began with a first-inning solo shot by Coutts, which was his second of the series, a second-inning RBI double by Hill and Vargas continued swinging a hot bat as he provided a two-run double in the third.

Meanwhile, Justin Cherry was keeping the Colonials in check as he didn’t allow a hit through the first four innings.

The Rams pushed their lead to 6-0 in the top of the seventh when Mircovich singled up the middle to drive in Kevin Heiss and Austin White.

The Rams have a pair of midweek games at Quinnipiac on Tuesday and Northeastern on Wednesday. Rhody will hosting conference rival Fordham this upcoming weekend.

“It’s a big weekend,” Cerrato said. “Their strength by far is their pitching and base-running, so we’re going to have to really work. We want to try and win every series and Fordham is going to be a tough one.”