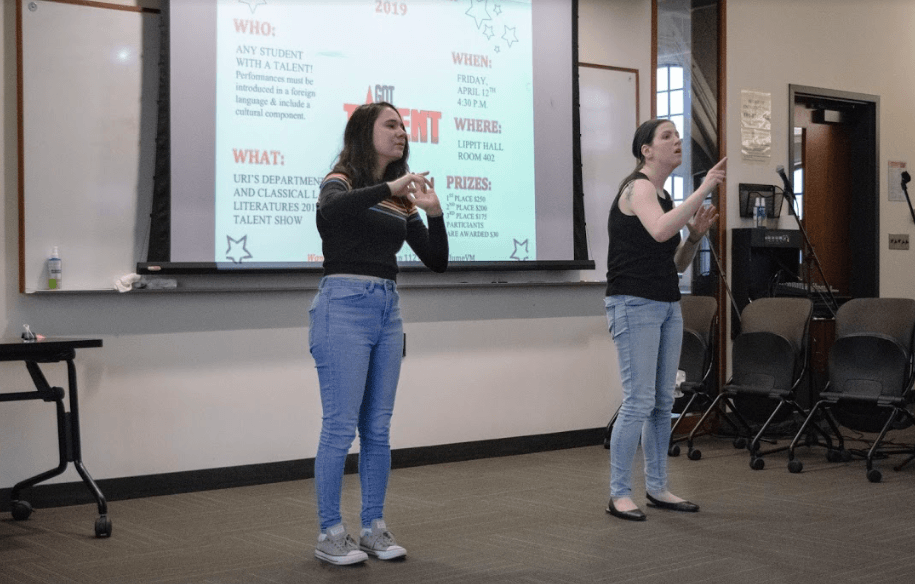 Last Friday the department of modern and classical languages and literature held their third annual Languages Got Talent Show in Lippitt Hall, a competition in which participants are required to introduce their in a different language and incorporate a cultural component into their performance.

The acts ranged from a solo traditional Chinese dance to an acoustic arrangement of the song “Plástico” by the Panamanian artist Rubén Blades on the classical guitar, acoustic bass, hand drum and egg shaker.

American Sign Language Club Presidents Jessica Janus and Brianna Perna performed a gloss, which is an interpretation of a song based on the emotional context behind the lyrics. The presidents’ gloss to “Lay Me Down” by Sam Smith caught the attention of other participants in the event.

Rose Wood, a sophomore fashion and merchandising and French double major, sang “Je pas ” by Pink Martini at the event.

“I feel like we all have our own little bubbles for like I am in French and all the French kids know the French kids. We don’t really interact with the people from the other language departments,” Wood said. “So the fact that there was sign language, I was like ‘oh yea we have sign language here,’ which I wouldn’t have thought of. Interacting with different people from different departments was really cool.”

The acts were judged on the language element, stage presence and creativity. Amongst the judges were Jimangping Cai a Chinese lecturer, Céline Jacquenod a Senior Lecturer of French and Adriana Wright an instructor in Spanish.

Participants who did not place in the top three were awarded a $30 gift card to the URI bookstore. The third place winner won a cash prize of $175 and the second place winner won $200. The winner of the $250 grand prize was Haneefah (Phoenix) Abdullahh, whose performance told a story through dancing, singing and talking.

“I decided to incorporate dancing and singing into my act because I am a singer-songwriter and I have been dancing since I was really young, these have been outlets for me,” said Abdullah. “At the same it was a competition where creativity and diversity what effects the judging. So I decided to do a variety of things instead of just one thing.”

Abdullah’s performance conveyed a strong message reminding the audience of the importance of being human.

“I think the message worked really well, reminding everyone that we are all human. There are a lot of things that go on it in the world, whether it is good. A lot of the times the bad things some from judgements, certain types of bullying and certain mixed opinions on certain situations or things in life,” said Abdullah. “So, I feel like the simple idea of just reminding us that we are all human and despite our differences. We all are the same species, doing our best and that is humbling for me.”