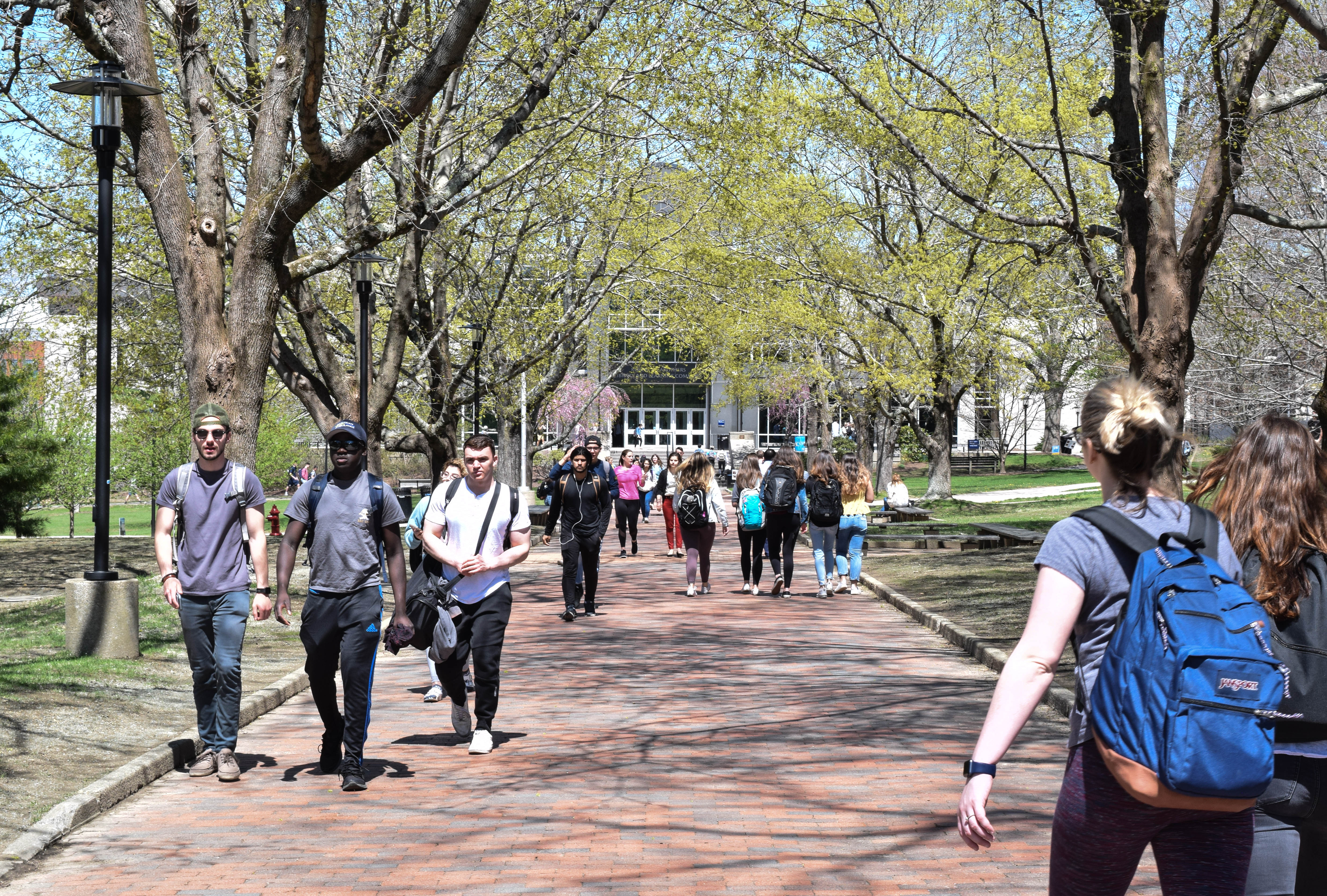 Campus diversity was recently questioned after an external review was completed and presidential committees were disbanded. | Photo by Anna .

By Laura Weick and Kate LeBlanc

Last January, the University of Rhode Island released a report by an external review team that evaluated diversity initiatives on campus which led to the disbandment of the Presidential Commissions on Diversity.

The disbandment of these commissions has made some community members feel that the University still lacks a sense of direction despite restructuring efforts.

The Report of the University of Rhode Island Office of Community, Equity, and Diversity (CED) External Review Team was emailed to community members on Jan. 24, 2019. University President David Dooley commissioned the report after a number of groups and individuals requested it, including the then-Chief Diversity Officer (CDO) Naomi Thompson and Dooley himself.

According to the report, the external review team received five self-study reports from the CED, Affirmative Action, Equal Opportunity and Diversity (AAEOD), the Gender and Sexuality Center (GSC), the Multicultural Student Services Center (MSSC) and the Women’s Center. All of these departments reported to the CED at the time. The review team, comprised of academic professionals from other public universities, held 18 scheduled meetings during the two-day, on-site visit.

One change during this transition period is that student-oriented centers such as the Women’s Center, the Multicultural Center and the Gender and Sexuality Center will now report to different offices, rather than the CED.

Another recommendation made by the external review team was to disband the Presidential Commissions on Diversity. These commissions were tasked to report to the University President about diversity initiatives and support activism on campus. These included the Equity Council (EC) and commissions regarding women, people of color, LGBTQ+ people and people with disabilities.

According to Lynne Derbyshire, a founding member and former co-chair of the EC, the Council was founded as the Equity Coalition by faculty and staff on a grassroots level. It then evolved into the EC under the University President. Derbyshire said that she is uncertain of if the council has been disbanded or not.

Derbyshire said that the EC helped protect the rights of students, faculty and staff. Derbyshire said some examples of the Presidential Commissions’ work included supporting the student library sit-in that called for the establishment of the GSC, encouraging the move of the Women’s Center to a more visible location on Upper College Road, helping establish gender neutral bathrooms on campus and the creation of the Diversity and Inclusion (C3) requirement in the general education curriculum.

The EC also worked on activism on a state level, such as writing a letter to the Providence Journal supporting high school students who opposed high stakes testing. Derbyshire believes that this sort of activism is why the EC should not be dissolved.

“We can return to the Equity Coalition if necessary,” Derbyshire said. “None of us are ready to give up on the work of decades to make a more equitable and inclusive campus. I would hope there would be a transparent discussion around how to continue faculty, staff and student engagement.”

The EC pushed for the establishment of a CDO, a position that serves as a member of the President’s executive team and ensures the accomplishment of the University’s diversity goals. Derbyshire said that it is important for multiple voices to play a role in improving diversity.

“I believe it is valuable to have a CDO who can take a lead on these issues,” Derbyshire said. “But we cannot assume that one office can create an inclusive and equitable community.”

Thompson served for approximately five years as CDO. Boudreaux-Bartels said that the Council called for an external review of Thompson. Council members had received complaints regarding the CDO’s interactions with staff in CED, WC, GSC, MSSC and with members of the Women of Color Network. There was also confusion as to whether it was the role of the CDO or of EC members to determine the EC’s goals and meeting agendas.

“Our expectation was, and my expectation was, that the CDO would be our strongest advocate to the institution for helping to improve on the status of students, faculty and staff of color,” Chris Hunter, a former co-chair of President’s Commission on Faculty, Staff, and Students of Color said. “I can’t say that the then-CDO really moved on any of the Actionable Strategies identified in our report that we thought would improve the status of faculty, staff, and students of color.”

It was this confusion that incited the idea of an external review for the entire CED.

“Because of complaints brought to the Equity Council, the Equity Council asked the President to have an open, inclusive and transparent evaluation of the Chief Diversity Officer, using the same Faculty Senate format that’s used to evaluate vice presidents,” Boudreaux-Bartels said. “We asked that a climate survey be done, and since we had heard that the President wasn’t going to allow a transparent review of the CDO, we asked for a comprehensive program review, at least of the CED office to see how it was functioning.”

Gerald Williams, director of talent development and a former co-chair of the EC before Boudreaux-Bartel’s term, emphasized the external review was not conducted to review any individual, but rather to examine the entirety of the CED office.

After the oral external review was conducted, Thompson requested to be reassigned to the URI Providence Campus, according to University President David Dooley. Dooley said that soon after her reassignment, Thompson resigned from URI for a new position.

Interim Chief Diversity Officer Mary Grace Almandrez said that in response to the report, the CED is holding a listening tour in which various departments and URI campuses can express their concerns regarding diversity. Almandrez said that this will give the office both student and staff feedback on how to become a more inclusive campus. She said this will also help to establish a plan for moving forward.

“What we’re going to do is take all that information and this summer come up with some proposals of what an advisory board could look like and then pitch it to the community and see what the community wants to do,” Almandrez said. “We want this to be an inclusive effort.”

Almandrez was appointed in January, and was not involved in the external review. However, she believes that it does offer insight into how the University can improve.

“I think that the external review was an opportunity for us to think about how we can reset during this transition period,” Almandrez said. “Part of it is giving people the space to reimagine what social justice on campus could look like in our curriculum, in our policies and our co-curriculum for example. And I think the external review provides some guidance on areas where we may want to prioritize some of our efforts.”
The external review only briefly mentioned services for people with disabilities. Anita Jacobson, the former co-chair of the President’s Commission on People with Disabilities, hopes that any new diversity initiatives will be more inclusive. Jacobson suggested a disability center similar to the GSC or Women’s Center as an ideal solution.

“I hope that disability will be revitalized because if we’re doing anything with diversity, I think people forget that people with disabilities really are the largest minority group and it’s a group that people can join at any point in life,” Jacobson said. “You can be living life and have something happen and develop a disability. It’s a changing, dynamic group of people.”

Jacobson and other former commission members said that they are unaware of any future plans or replacements for the Presidential Commissions. This is partially because diversity services on campus are in a transitional phase. However, some community members find the lack of communication frustrating.

Kern believes that the impact of dissolving the EC and other Presidential Commissions will be harmful to student involvement in diversity initiatives, especially considering their history in supporting student activism.

“The impact [of the EC] was sharing of information among student representatives,” Kern said.  “We used to have Student Senate, faculty representatives and staff representatives. To my knowledge there is not a structure that links academics, student life with the student experience.”

Assistant Dean of the College of Arts and Sciences Earl Smith III served as a co-chair for the President’s Commission on Faculty, Staff and Students of Color, alongside Hunter, before the commissions were disbanded.

In their roles as co-chairs, Hunter and Smith worked to develop a comprehensive review of diversity on campus. This report was entirely separate from the external review.

That report examined diversity and representation at URI. Hunter shared the 2015 report with Almandrez upon her arrival to campus in hopes of achieving some of the actionable strategies they had outlined for the community. Smith said that he and Hunter never got a straight answer in regards to the publication of either report.

Since disbanding, Smith said it has been unclear as to who has been advocating on matters related to faculty, staff and students of color and what efforts are being done to increase diversity on campus.

“[Disbanding the commissions] put [diversity] at a standstill,” Smith said. “Whether it was good intent or not, all of the work and the tireless efforts of people that are concerned from all walks of life, that have volunteered their time, and then they hear there’s going to be no more commissions. They were disappointed.”
In an effort to continue advocating for people of color at URI, Hunter and Smith have developed a group known as the Faculty Staff Association of the African Diaspora. Smith did note, however, that

Dooley has been the first University President to actually create, advocate for and support a department with resources to systemically address diversity.

Although the Presidential Commissions for diversity were disbanded, URI has other diversity commissions within other aspects of the University. These commissions were not included the CED’s external review and remain intact.

Dooley did not disband the unit commissions that are in effect in each individual college and throughout institutional organizations such as Athletics, Information Technology Services, the Graduate School of Oceanography and more. These groups are still in existence, and each group has a representative advocating for diversity on campus at their level.

“The University should be working hard to support what they’re trying to do at the college level,” Dooley said. “But we all need to be on the same page. We need to have really good communications and we really need make sure that all of our priorities are aligned, that we’re emphasizing the things we’ve agreed should be emphasized in the strategic plan.”

Although these are still present at the University, some community members are uncertain as to how they function and at what level.

“I know what the intent is of the [unit] commissions, but I’m not exactly sure how they function and what priority they may or may not receive at each college,” Smith said.

As Almandrez hosts listening tours throughout the year, it remains unclear as to what the future of the office of the CED holds, and how URI will decide to permanently restructure it.

“It’s always useful for universities to take a timeout every so often and ask themselves, ask ourselves, okay, is this the way we should be doing it now?” Dooley said. “It was the right way to do it five or 10 years ago, but time has passed. Things have changed now, [so] what should we be doing?”