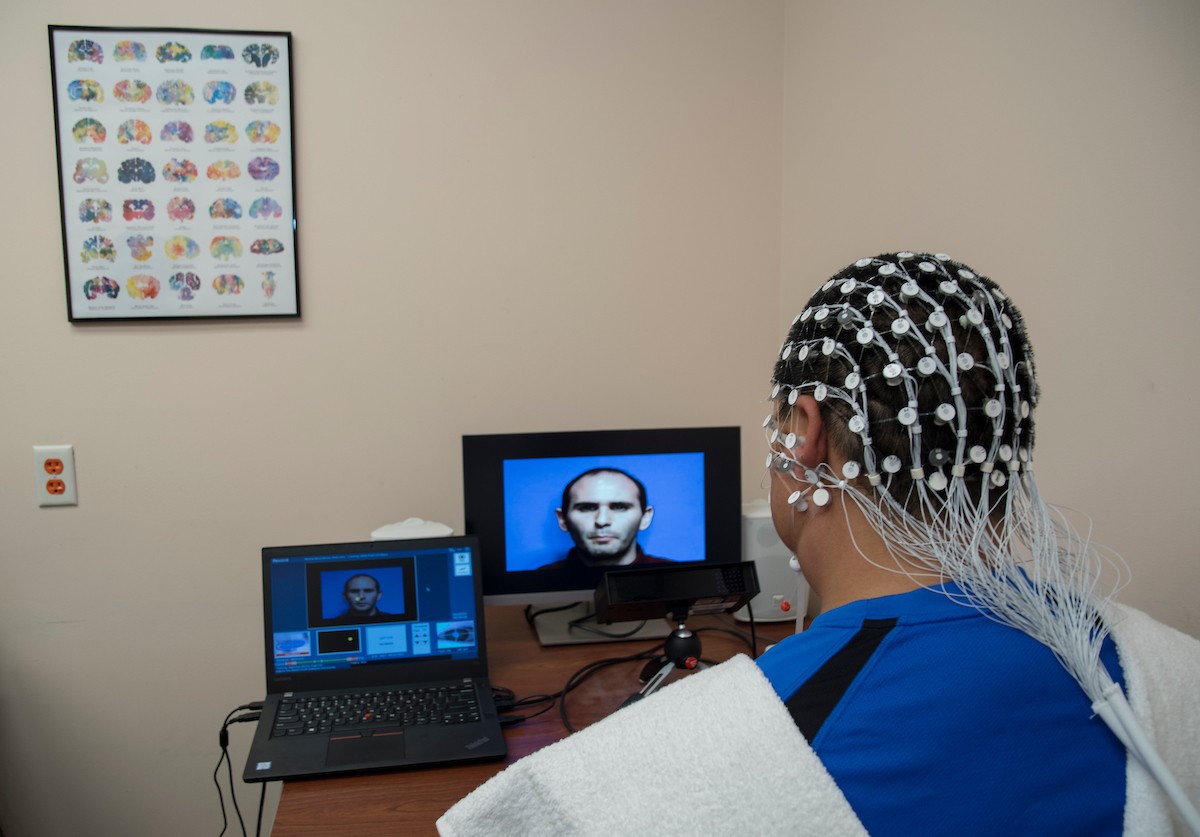 Two University of Rhode Island professors are tracking the eye-movements and measuring brain activity of children with autism spectrum disorder (ASD) to see how they understand and learn language.

Assistant Professors of Communicative Disorders Alisa Baron and Vanessa Harwood have partnered with Haskins Laboratories to lead to better diagnostic procedures and intervention procedures for children with ASD. The study looks at audio and visual integration in kids with ASD, meaning that Baron and Harwood are investigating how kids use the information they see on a speaking face and integrate that with what they hear.

“If we find out that kids with autism need more support to help with integration of what they hear and what they see, we could develop interventions that support looking at a speaking face,” Harwood said.

Baron and Harwood define ASD as a neurodevelopmental disorder that is characterized by three areas. These three areas include difficulties in language, difficulties in social communication and restrictive and repetitive interests or behaviors. However, these areas can all be affected differently and to different severity levels, emphasizing that autism is a wide spectrum.

“Some kids could be nonverbal while others are very, very verbal,” Baron said. “Some children are very high functioning in language  and academics and have difficulties with social skills. That’s why it’s a spectrum because it really is a wide range.”

Baron and Harwood are leading URI’s contribution to the study by studying children, but also parents of children with autism. The children they are working with range from age 10 to 18.

This study has been ongoing for several years at Haskins, an independent and non-profit laboratory affiliated with the University of Connecticut and Yale University. The two faculty members’ involvement started after the conclusion of the spring 2019 semester. They spent the summer getting their new Collaborative Cognitive Neuroscience Laboratory (CCNL) along with getting their experiments up and running. They also spent the summer training their research assistants, becoming familiar with all the new technology in their new lab and performing practice tests getting them ready to start their actual research.

So far they have had one child and two parents come in and are working hard to recruit more people over the next year. They’re using electroencephalography (EEG) technology to measure brain activity in both kids with ASD, neurotypical adults and parents of children with autism.

“We particularly are looking at brain activity as it relates to a particular stimulus such as speech and how we take in information from a speaking face that contributes to speech processing,” Harwood said. “So basically you’re taking something as simple as a speech syllable like ‘ba’ and we timelock that [stimulus] to when the brain is processing that sound. We are measuring different aspects of the brain waves associated with speech processing, including speed of processing and the amount of neural activity that goes into processing different aspects of speech.”

As a result, they can measure how a brain reacts to a stimulus in real time, meaning how a person’s brainwave is affected by hearing a certain sound. This can be measured and seen on a computer screen during the experiment.

Haskins was where the children side of the study originated. Baron and Harwood were the ones who thought to also measure how the brains of parents of children with autism and neurotypical adults reacted to certain stimuli. The whole study is a collaboration between both Haskins’ Laboratories and URI’s CCNL.

From a research standpoint, Baron said that being able to combine two technologies such as eye-tracking and EEG is still pretty novel, making it exciting to be collecting information in this way. They would love for their research to lead to answering questions such as “how do kids with autism process language,” “how are they different from their peers” and “what are the specific characteristics of language processing in kids with ASD?”

This type of study is something that both Baron and Harwood are passionate and care a lot about, as they hope their research gives back to the autism community.

“I know it sounds super mushy [to want to] make the world a better place,” Baron said. “But existentially I think ‘why am I here’ and I truly believe that I am here to help other people and that’s why I get up in the morning and why we both do this research.”

Baron and Harwood encourage any URI students or anyone else who is interested in being a part of their study to reach out to them at ccnl@etal.uri.edu.