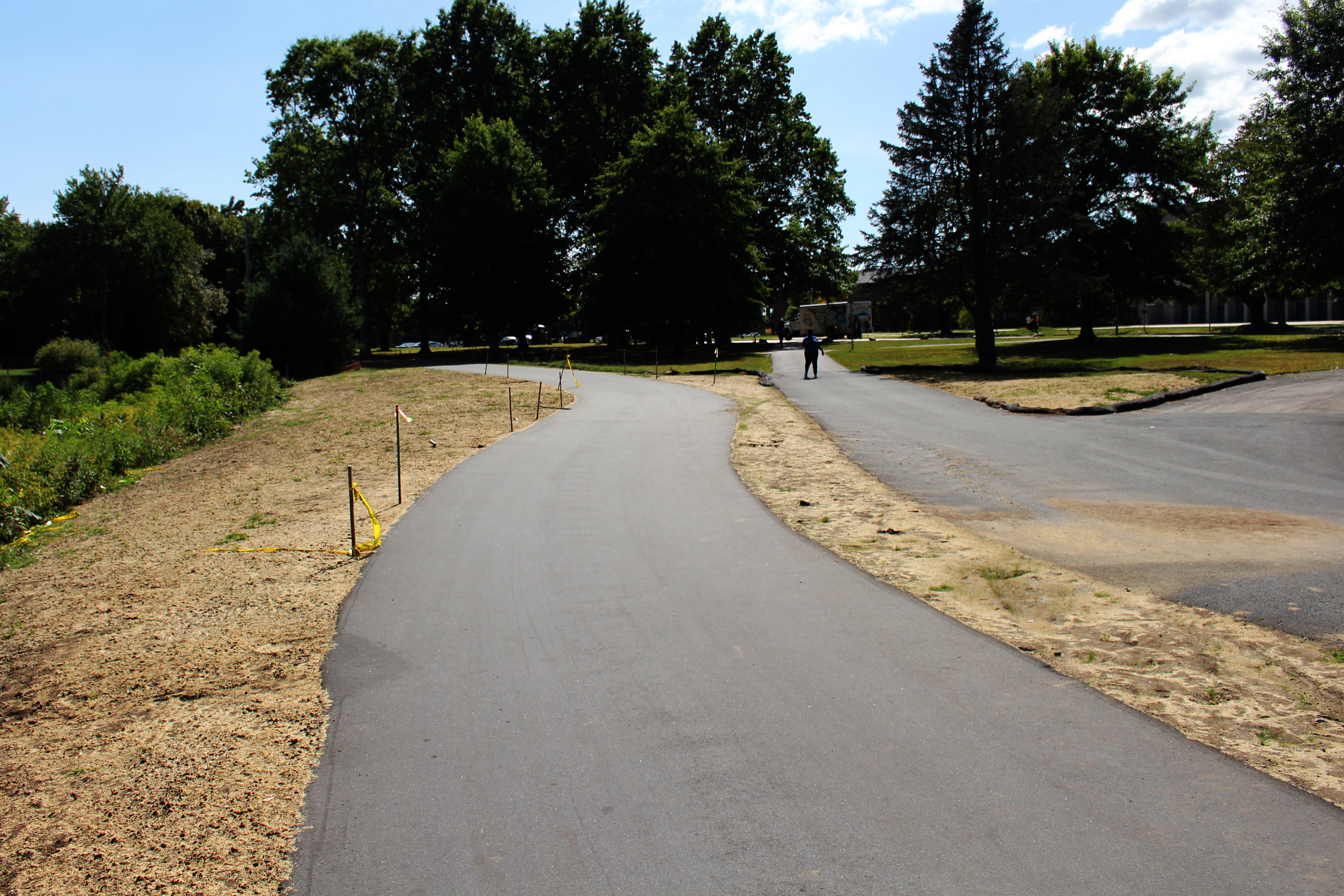 The new bike path that starts near Keaney Gymnasium and leads to Wakefield is now ready for pedestrian use. Photo by James McIntosh.

The Willian C. O’Neill Bike Path, more commonly known as the South County bike path, will be expanded through the University of Rhode Island’s campus and is scheduled to be finished around December.

The new path on URI’s campus will connect to the main path near the Curtis Corner school, which is southeast of the Kingston campus. Previously, the closest part of the bike path to campus was the main path’s beginning, at nearby Kingston Station.

The bike path, which will run between Eddy Hall and the Keaney Gymnasium, among other buildings, has been hailed on their website, southcountybikepath.org, as “one of the premiere [bike] paths in the Northeast.”

Dave Lavallee, URI’s assistant director of communications, was involved with the project to expand the path.

“October of 2017 was really the first time the plan had been discussed with the public, both for the URI public and the community of South Kingstown,” Lavallee said.

Lavallee also noted that the decision to expand the path and have it branch out onto URI’s campus was not affected by the already close main path.

“It certainly is handy now,” Lavallee said. “If you’re a student and you take your bicycle to some destination, you can get back to campus and you don’t have to go as far out of your way to get here.”

There are also further plans in motion to make the bike path safer. Lavallee noted that while it hasn’t been finished yet, “there’s going to be a system where you can press a button and stop traffic, and that’ll make all the difference in the world.”

According to Lavallee, the University currently has no plans for events to hold on the bike path. However, he also notes that should change in the near future.

“I don’t know what those kinds of plans might be, but we would probably try to highlight our work on sustainability,” Lavallee said. “Maybe a campus bike ride that would put us around the regular bike path that goes from Kingston Station to Narragansett. It could be a nice tour of the beaches.”

Many local businesses have sponsored the construction of new phases of the path. The list on the path’s websites businesses as diverse as Arnold Lumber, Brickley’s Ice Cream, and local yoga place All That Matters.

The bike path was originally called the Narragansett Pier Railroad, according to southcountybikepath.org. The website said that state organizations looked at turning the railway into a public school transportation system in South Kingstown, alleviating the need for some school buses on the road.

That concept, however, was not implemented, and in 1981 the land was bought by town councilman Anthony . He announced plans to turn the land into a bike path. With government on board, the former railway land has been a bike path ever since.