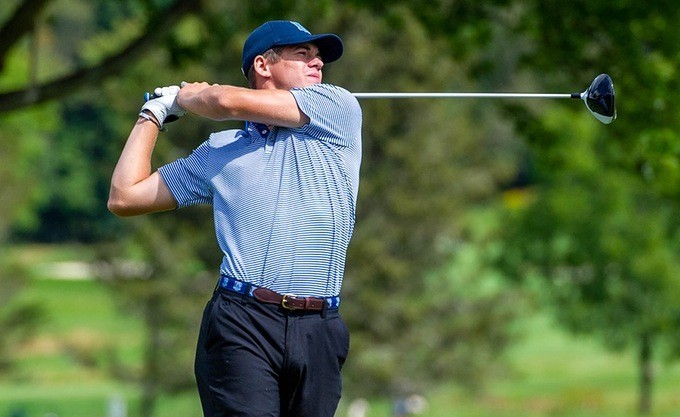 For the second time in many weeks, Rhode Island Golf can boast a tournament medalist after Freshman Bryson Richards earned co-medalist honors.

Competing in the Doc Gimmler at Bethpage Red Golf Course in Farmingdale, New York, Richards was competing in just his second ever collegiate tournament.

“It was awesome,” said Richards. “Especially having a rough first week, I did not play well coming off a good summer. Going into this tournament I leaned on my teammates, they helped me get prepared. I played well, I was just in the right mindframe and the right mental state.”

The Plainfield, Vermont native recorded rounds of 67-72-67 over the two-day and three-round event, to finish tied for first at four under par. Bethpage Red played to a Par of 70 and at a yardage of 7,092, this was no pitch and putt.

“From the first time I started to follow Bryson as a junior I knew he was going to be successful,” said Head Coach Gregg Burke. “He compresses the ball, he’s a great athlete.”

Chris Francoeur continued his stellar play thus far, finishing in solo 10th after a disappointing final round 5-over par at 75. Francoeur was a top the leaderboard after the first two rounds firing scores of 3-under 67 and 2-under 68 on the first day.

“It just wasn’t Chris’s day,” said Burke. “He didn’t have his best stuff. He was doing the best he could. He got two bad breaks and it just produced a day that wasn’t his best.”

Overall Rhode Island finished in fourth place out of the 14 teams competing in the Doc Gimmler. Rhody came into this year’s event looking to defend their 2018 title, as they won the Gimmler last fall. As a team the Rams shot a score of 8-over 848, which put them 14 strokes behind the winning team, Navy. They shot a combined team score of 6-under 834.

Having past success at Bethpage Red allowed URI to get off to a hot start, as they finished round 1 8-under par as a team and in the driver’s seat. A disappointing second round would catch up to them and allow Navy to take a one stroke lead into the final round, which they would add upon.

“We just had some guys not play well,” said Burke. “Brandon [Gillis] is not hitting the ball well at all but I’m proud of him. He is scraping, clawing and grinding in a way that he’s never had to before in his life. Jason (Short) had a fine first round but then really struggled the next two.”

Rhode Island now looks forward to this upcoming weekend, as they travel to Hanover, New Hampshire to play in the Dartmouth Invitational at Hanover Country Club.