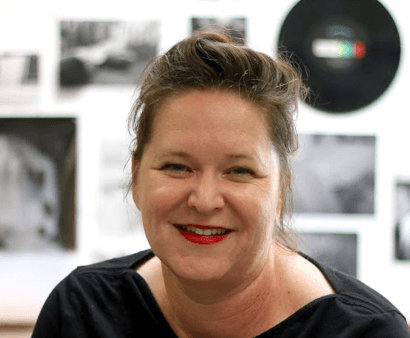 Darkroom photography professor Zoey Stites shares her love for photography with her students and decorates her classroom with student work. Photo by Grace DeSanti.

Zoey Stites, an instructor in the University of Rhode Island’s art department, makes it clear that she loves what she does by how her office and workspace decorated.

The walls of her office are covered in darkroom prints and the pipes are concealed with empty 35mm canisters. The darkroom is a place of zen, like an oasis, to Stites.

“Darkroom is my first love,” Stites said. “And I do a lot of stuff digitally as well myself, but there’s just something magical about darkroom. You can’t use your phone in there and it’s one of the few moments where people unplug. You kind of have to be there in that moment waiting for the magic to happen.”

Stites doesn’t get the same effect from digital photography, which is why she prefers darkroom, despite the challenges that may come along.

Besides her own personal admiration of darkroom photography, Stites thinks it’s important for students to learn the process because it will make them better photographers. To her, it’s incredibly rewarding to get the end result after all the work that goes into it.

“There’s this reward for it that’s so much higher because of the amount of thought and effort that you’ve had to put into the process to get it to come out,” she said. “It really does make you think and see more carefully.”

Stites’s inspiration to teach came from the inspiring teachers she had during her time as a student. This, combined with her passion for darkroom photography, compelled her to start teaching at URI. Stites has now been teaching for 16 years.

Just this past year, Stites had the honor of winning the PTF Teaching Excellence Award. She compared it to winning an Emmy and felt privileged to win it along with another teacher from the art department, who she had been taught by herself.

“It was really great actually because another one of the other teachers in the department got one and she was one of my teachers,” Stites said. “So it made it a little bit more meaningful to get mine with her.”

Ana Santos, a sophomore textiles, fashion merchandising and design major, took the beginner’s photography class last semester and is now in the advanced class. Overall, she’s very happy that she took the class and loves Stites as an instructor.

“[Stites] is the only professor that I’ve been really able to connect with,” Santos said. “She has helped me out so much with like just thinking creatively.”

Santos feels that Stites does a good job of creating a welcoming and peaceful environment for her students as well. Mixed with her own passion for darkroom photography, it was a perfect match for Santos.

“I am definitely liking the classes,” said Santos. “I was struggling a little because I couldn’t get pictures, but now I really, really like this class for sure. That’s why I like it here because it’s just such a nice little environment.”

Stites has a Bachelor of Science in urban affairs and a Bachelor of Arts in photography from URI. She received her Master’s in Fine Arts from the University of Florida.