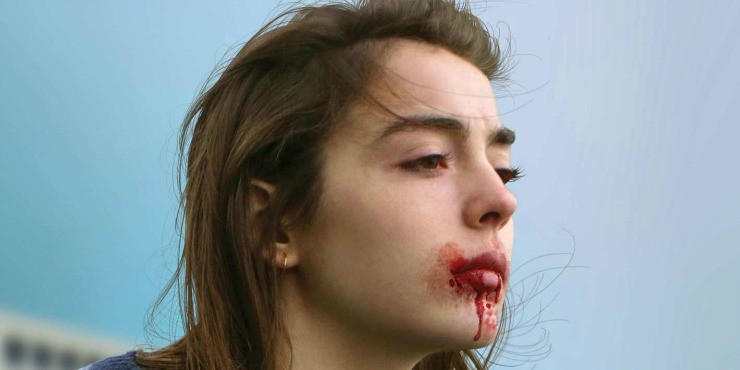 Julia Ducournau’s “Raw” can only be described by its title, the film is full of raw emotion from the first minutes. The film is a new take on the coming of age story and a show of what modern horror movies can and should be.

Adjusting to college life can be extremely hard for many people. Justine seems to have lived a pretty sheltered life up until college, but when the rules are gone things begin to change. She has to deal with what freshmen in college can experience, such as hazing, new freedoms and testing her limits. Her issues only start there though, when she also has to deal with a new insatiable hunger for meat.

Justine is a freshman at veterinarian school and a strict vegetarian. The school she is attending looks the other way to the yearly hazing rituals that all students go through. These rituals include the use of animals’ organs and blood on the freshman, and this year freshmen are required to eat a rabbit’s liver. When Justine tries to refuse the liver, her sister, Alexia, an upperclassman at the college, forces her to eat it. Her cravings for meat begin to grow at an alarming rate.

The coming of age story has been used in so many movies, but “Raw” does it in a different way by making it a horror movie. “Raw” does a great job using that horror as a tool to tell the story instead of as a gimmick. Every scare in the film engages the audience more.

The moment that sticks out the most is when Justine eats Alexia’s finger. Alexia is helping Justine wax when a wax strip gets stuck. Alexia attempts to cut it off and she ends up cutting off her finger. When Justine sees this, she cannot control herself and begins to eat her sister’s finger instead of helping her.

Even though the scene is pretty grotesque it is more than just a scare. It works really well in making the audience think about the implications of what is happening. Justine eating the finger is a metaphor for her sexual awakening. She is indulging in the physical pleasures that she has denied herself because society tells her that it is wrong. Though I am not saying sex and cannibalism are comparable, they are interwoven in this scene.

Women often are taught to be wary of sex and they end up being scared of their wants. In the same way, Justine is denying herself her cravings for meat. She is scared because society tells her that it is wrong for her to want to give in to what she wants, but it is in her nature to want human flesh.

She gives in to her pleasures for the first time in this scene. After this moment of catharsis, Justine finds herself in a state of shock over what she has done. She feels ashamed of eating her sister’s finger, but more so she is ashamed of giving in to her desires.

The movie is in French so be ready to read subtitles. More importantly, if you are squeamish and don’t like the thought of blood this probably isn’t for you. The scares are not insane by any means but they can be a lot to take in if you can’t take body horror. Some of the scenes are very grotesque but in an artful way.

Though “Raw” may seem like just another gimmick horror film at first glance, it is a story that everyone can or will be able to relate to. If you are looking for a horror film that will make you think, this is it.