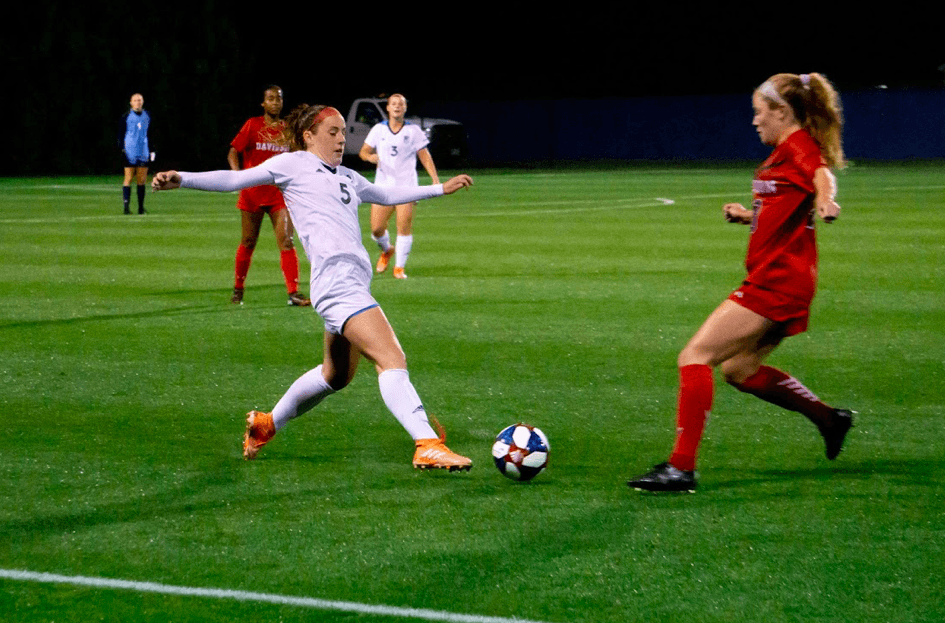 Defender Karlee Luker gets the ball away from opposing offene in this week’s game against Davidson. Photo by Autumn Walter.

The University of Rhode Island’s Women’s Soccer team continued the 2019 season this past week when they hosted the Davidson Wildcats and traveled to face the University of Massachusetts.

On a cold and rainy Thursday night at the URI Soccer Complex there was no shortage of soccer, as the Davidson Wildcats defeated the Rams in overtime, 1-0. After a great defensive performance by both teams, holding each other scoreless through 90 minutes of regulation time, the Wildcats scored in overtime. Davidson midfielder, Sabine Chandler, was able to sneak the ball by the Rams net-binder, freshman Teresa Morrissey, in the eighth minute of the first overtime period.

Head Coach Megan Jessee had nothing but good things to say after the heartbreaking loss.

“It’s tough obviously,” said Jessee. “You win as a team and lose as a team, mistakes happen and we need to pick Teresa up and let her know we still have confidence in her. The team battled, worked hard, and I don’t know if you can ask for much more out of your team.”

Had it not been for Morrissey’s spectacular play earlier in the match, the game could have been over much sooner. She had seven saves during the match, which kept URI in the game against the Wildcats. The freshmen had four stops in the first 20 minutes, and her spectacular second-half save kept the game tied.

Jessee also praised the play of defense after the game, as Davidson was caught offsides nine times.

“The back four was very connected today,” Jessee said. “Obviously Davidson was caught offsides quite a few times, but credit to the line staying together and reading the ball, dropping off when they needed to, and stepping up when they needed to.”

On Sunday, Rhode Island lost in overtime for a second straight game, this time to UMass. The final score was 2-1.

The match got off to a slow start as both teams only recorded one shot on goal a piece in the first half of play. In the second half, Massachusetts was first on the board in the 56th minute following a goal by Rebecca Frisk.

With only 33 seconds remaining on the game clock, Rhody got their goal. Forward Rebecca D’Anna sent the match into overtime after she finished a pass from teammate Jaileen Goncalves. It was the second goal of the season for the sophomore and third of her career.

Three minutes into the extra time Karlee Luker was given a yellow card following a foul in the box, put Sini Laaksonen on the spot for a penalty kick. She put it by Morrissey, giving the Minutewomen the home victory.

While Rhody was outshot throughout the game, 22-8, the freshman goalkeeper was outstanding in net for URI, recording eight saves. Junior Kaitlyn Sengphilom and freshman Brooke Cavino both recorded a shot on goal for the Rams on the day.

Rhode Island hopes to improve their 3-7-3 record as they head down to The Bronx to take on Fordham University in a battle of the Rams on Sunday, Oct. 13. Kickoff is at 1 p.m.