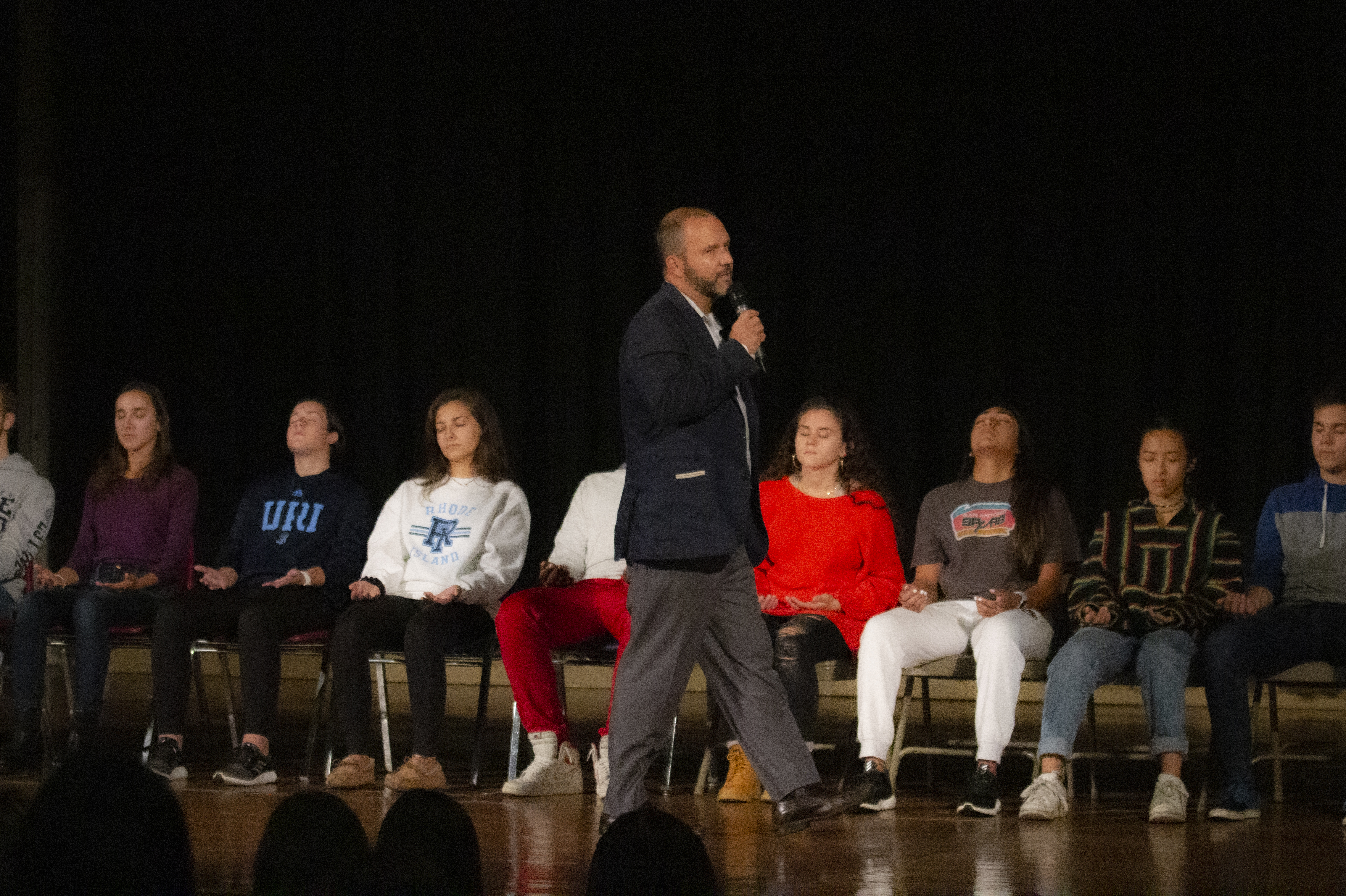 Hypnotist Frank Santos Jr., had the audience cracking up over his ability to get volunteers to perform on stage. Photo by James McIntosh.

On Friday, Oct. 4, student volunteers who attended the Frank Santos Jr. Hypnotist show at The University of Rhode Island, were hypnotized into forgetting their last names, feeling as though they were Power Rangers and believing that a spaceship had landed outside on the quad along with many more hypnotic tests.

Santos, an experienced hypnotist, asked for 20 volunteers to be hypnotized, whom he narrowed down to nine for the majority of the show, after testing their relaxation and hypnotism skills.

“It takes me approximately five minutes to hypnotize people on stage,” Santos said. “They need to focus on my voice and on the music so sit back, relax, let yourself go. Don’t be nervous, don’t be scared, hypnosis is just a fancy word for relaxation, all hypnosis is self-hypnosis and you actually hypnotize yourself, that’s how you control everything.”

To initially hypnotize students on stage, Santos had them sit on the chairs provided, tilt their heads up to the ceiling with their eyes open, and lay their arms on their legs with palms facing upwards.

“I will count down from five to zero, with every number I count down your eyes will get heavy and when I reach the number zero your eyes should be closed and also let your eyes relax,” Santos said. “You’re breathing in relaxation and you’re breathing out stress and tension.”

Santos then told volunteers that he was going to countdown from 10 and with each decreasing number, volunteers would feel their body became limp, loose and relaxed.

“When I reach the number zero you’ll have reached a nice deep hypnotic state,” Santos said. He reminded everyone that no matter how they may feel, they always had control over themselves.

Once students were in a hypnotic state, Santos informed them that for the next hour or so, whenever they opened their eyes, all he had to do to put them back under hypnosis, is say the word “sleep.”

Throughout the hour, Santos had a set of tests for volunteers whom he put under hypnosis and who acted out the tests he had in store for them. To begin, Santos told volunteers while they were “asleep” that every time he would say the word “microphone,” volunteers would be able to smell a dank fart coming from him which would get worse and worse with each time he said it.

Santos then woke volunteers up and began working the word into a normal conversation with audiences.

With each use of the word microphone, volunteers pulled back in horror, their faces grimacing in disgust, until Santos put them back under to “sleep.”

Other tests Santos had volunteers complete were having their tongue stuck to the bottom of their lips and trying to say their names, making them see all of the audience members naked, being Power Rangers and showing off their moves to the audience, believing the Quad had turned into Area 51 and having them perform as though they were on “The Voice,” singing along to Ariana Grande and NSYNC.

For certain parts, Santos split the group of volunteers into two telling them that they were professional ballerinas who trash talked their competitors, having them dance around stage and asking their opinions on the opposing ballerinas.

“They’re awful, absolutely trash,” one volunteer said. “I think they’re faking it, definitely not skilled like us,” another said.

At the end of  the show, Santos told the volunteers that once he woke them up they would not longer be sleepy and instead would feel energized.

“At first you’ll forget the show but as soon as you leave the auditorium the show does come back to you and you had a great time,” Santos said.

Julia Nelson, a member of the audience, said that she thought the show was great.

“I’m definitely making all of my friends come back and having us all be hypnotized next year,” Nelson said.