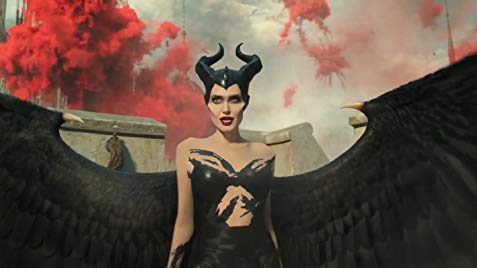 “Maleficent: Mistress of Evil” is the sequel to the recent twisted Sleeping Beauty adaptation starring Angelina Jolie in the title role and Elle Fanning as Princess Aurora. The film takes place five years after the first, with Prince Phillip proposing to Aurora in the Moors Kingdom and Maleficent trying to get along with the king and queen of neighboring kingdom of Ulstead who have secrets of their own.

This sequel has a lot of interesting ideas and beautiful cinematography that makes it feel like a live-action dark fairy tale that seems to have way too many plotlines to manage and not enough real surprises until the very end. The performances from Jolie, Fanning and Michelle Pheffier as Queen Ingrith of Ulstad are pretty good and yet none of them are given enough to do until the very end. The beginning of the film felt like a fairy tale version of “Meet the Parents” with only some beautiful costumes and visuals to really catch the audience’s attention until its second act where it truly starts to develop its characters and concepts.

The main plot of the film follows Maleficent being wrongfully accused of cursing the king of Ulstead and Queen Ingrith starts preparing for conflict with the fairy kingdom of the moors is overly complex yet interesting enough to engage its audience. Once the film begins to go into the hidden world of Maleficent’s race of Feys, it becomes both visually interesting yet overly crowded with plot. From the film’s second act, it tries to develop multiple sides of conflict with Chiwetel Ejifor and Ed Skrein as Cornall and Borra who represent the ideals of peace and war for Feys while trying to focus on Aurora and Phillip’s wedding.

The visuals of the hidden faye realm are quite interesting and colorful even if the film doesn’t focus on it nearly enough. All of this set up of conflict between the kingdoms is slightly interesting and yet none of it was truly memorable. In contrast, the film’s ending battle sequence is one of the more creative and dark action sequences I’ve seen in a children’s film in quite some time with plenty of consequence taking place throughout. There are several dark action sequences that reminded me more of a “Pirates of the Caribbean” film than a fairy tale. While these action sequences are truly entertaining, “Maleficent: Mistress of Evil” felt rushed into a forced resolution by its ending just to have a happy ending for the story.

The film suffers from an inconsistent tone that could be telling a corny joke one moment and having a dramatic death the next. The worst factor of this is the film’s sudden happy ending that focuses on a couple that lacks any real chemistry even with Fanning’s great attempt. Lastly, the film does utilize its lead performances and its basic war and peace premise to its advantage due to the delightfully villainous dialogue and constantly unique visuals that aren’t afraid to go dark.