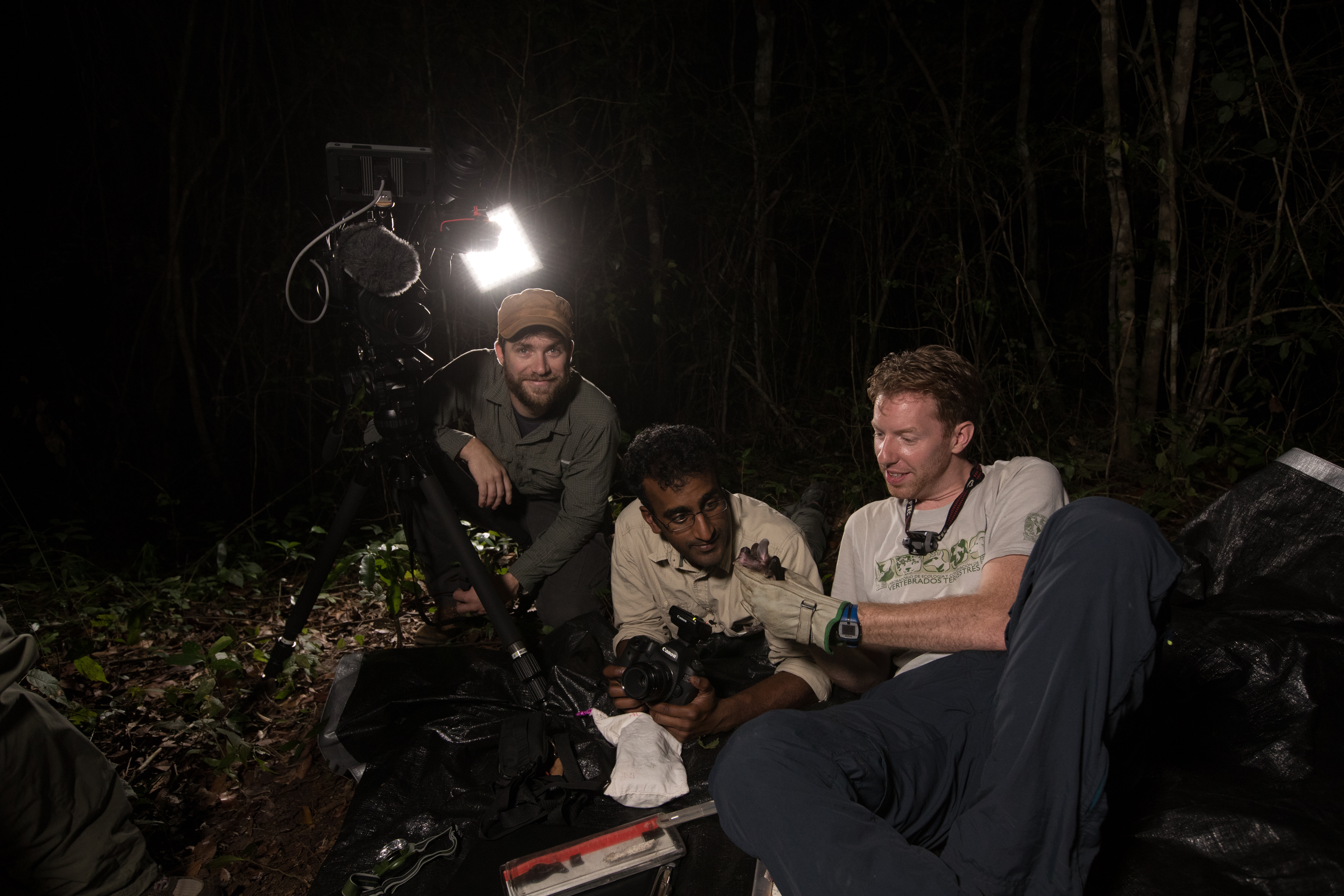 Behind the scenes photos from the documentary “In Search of Tzotz” and “Giant Carnivorous Bats” show the incredible place that it was filmed. Photos courtesy of Jason Jacks.

Jason Jaacks, an assistant professor of journalism at the University of Rhode Island, has been somewhere that most people never will go: inside the roost of a giant carnivorous bat.

Jaacks got a first-hand look into the world of carnivorous bats during the production of  “In Search of Tzotz,” a short documentary film, and “Giant Carnivorous Bats,” a 44-minute television special for National Geographic WILD.

Both films are being screened this afternoon in Ranger Hall as part of a Harrington Forum event. Jaacks will also be talking about the behind-the-scenes process of putting both films together from pitch to premiere, and will have some of the equipment he used for both documentaries as well.

Both bat species are rarities in the bat world. They are part of less than 1 percent of all bats known to eat other small creatures, including other bats. In order to study the bats, the team sometimes had to get creative.

“We’d actually capture them in the field, bring them back to a hotel and let them loose in a hotel room for a couple of days,” Jaacks said.

He explained that this was done in order to get a better look at how they hunted. The researchers would lay leaves on the ground and put some small creatures in the room and they would then watch how the bats hunted. This was all captured on camera.

To film the bats in their roost, Jaacks spent quite a bit of time with them in their natural habitat.

“I spent a lot of time, hours cumulatively, probably days worth of time, kind of in the bats’ house,” he said. “I’m just in there, you know, looking with a little piece of cloth over my head looking into a viewfinder in infrared, like, watching them.”

Jaacks said he began working on “In Search of Tzotz,” began in 2015. The film was released in 2016. Jaacks shot, produced, directed and edited this short film almost entirely on his own. Some of the bats seen in the film roost in the ruins of Mayan temples.

“Giant Carnivorous Bats,” which was released in 2018, went through a similar process during production.

This project was a television special for National Geographic WILD. The idea of doing the special was finalized in November 2016, after a National Geographic magazine feature on Medellín and his research had been greenlit following “In Search of Tzotz.”

On both films, Jaacks did much of the work himself.

“Really, it was just me,” he said. “So, I field produced it, kind of kept the story all in my head, and then I was the one behind the camera, and then I was also running sound.”

The major difference in production was that with “In Search of Tzotz,” Jaacks himself did all of the post-production work, such as editing and determining which shots to use. On “Giant Carnivorous Bats,” the editing was done by a separate team, though Jaacks did collaborate on the voiceover script and was able to give input during the editing process.

Producing a film in the jungle alongside the researchers, photographers and the bats themselves was an experience that Jaacks won’t soon forget.

Jaacks had to bring roughly 1,000 pounds of equipment with him on each of the trips that he went on over the course of 18 months, which lasted several weeks at a time. Everyone stayed in a tiny resort village. The whole time they were there, they saw only one other group of tourists.

Very little research has been done on these species of carnivorous bat, and many new discoveries about them were made with Jaacks as a witness.

“It’s really interesting and fun for me to work on those stories where it’s like you get to tell, you know, kind of an amazing adventure story in this crazy wild place,” Jaacks said. “But you’re [also] watching the process of science kind of happen…live. We were able to see some things that had never been seen before.”

While Jaacks knows more than the average person about things such as carnivorous bats, he doesn’t consider himself an expert. However, Jaacks said that’s not the goal of a journalist. According to Jaacks, the goal of a journalist is to be well-versed enough in a subject to know what to ask the experts in order to tell the story.

“If you can walk the [walk] enough to report about it, then you get to bring the audience along that journey with you, and that, I think, is valuable,” Jaacks said.