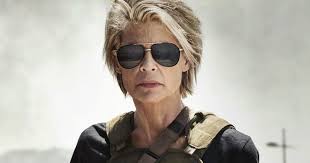 “Terminator: Dark Fate” is the latest in a long line of Terminator sequels and is supposed to be a direct sequel to “Terminator 2: Judgement Day.” This film had some promise due to the return of Linda Hamilton and Arnold Schwarzenegger as Sarah Conner and the T-800 along with “Deadpool” director Tim Miller as the director of this recent release.

Unfortunately, “Terminator: Dark Fate” is yet another mediocre reboot/sequel to a classic franchise with some intense action sequences and good performances that try to hold up a rather uninspired story that feels very similar to the first two films. The film follows an enhanced human named Grace who is sent to protect Dani, a motor worker, from a new terminator, played by Diego Luna. Luna was sent back from another post-apocalyptic future. The film starts off with an intriguing and surprising opening sequence that serves as an epilogue to “Terminator 2” and introduces its characters with some suspenseful action sequences.

The problem is that after the opening sequence, the film follows the basic formula of the franchise while barely introducing any new elements to the mix. Dani is the new target for a fairly intimidating new terminator. The only truly new element of the film turns out to be the return of Conner. Hamilton gives a very good performance as an older Conner who has set her life of hunting any terminator sent from the future.

“Terminator: Dark Fate” does not develop its characters nearly as well as its predecessors even though the film does move at a brisk pace. There are plenty of interesting and long action sequences that build tension to some degree but does build character in the slightest. Natalie Reyes is very good as Dani because she is one of the only characters that feels like a real person and she is given some of the films rare emotional moments that should have been expanded upon. Mackenzie Davis and Luna are also perfectly fine as the protector Grace and new Terminator but their characters are not very well developed until the very end. Davis in particular seems to be going for equal parts comedic and dramatic tones within her performance to mixed results.

The film’s new location of Mexico and Texas is refreshing from previous entries in the franchise in regards to cinematography and action set pieces but does not make the film’s story any different in the slightest. The film’s main problem is its repetitive script that feels very familiar to the original two films and is full of weird coincidences to move the plot along without making much sense.

All of the film’s editing, acting and action sequences are quite good while the film’s story moves along without any real surprises or interesting twists to catch my attention. Even the entertaining return of Arnold as an older Terminator feels pretty forced within the film’s script. Arnold remains entertaining when he is on screen but the script doesn’t give him much to do within the main story.

However, the film really suffers from an inconsistent tone that seems to randomly bring up exposition dialogue right after an entertaining action sequence. None of the action really leaves much of an impact after it ends, especially during the film’s overlong climax. The film’s climactic action sequence at a dam is the perfect blend of suspense and absurdity until it goes on long enough to lose the impact it is trying to leave open for future films.