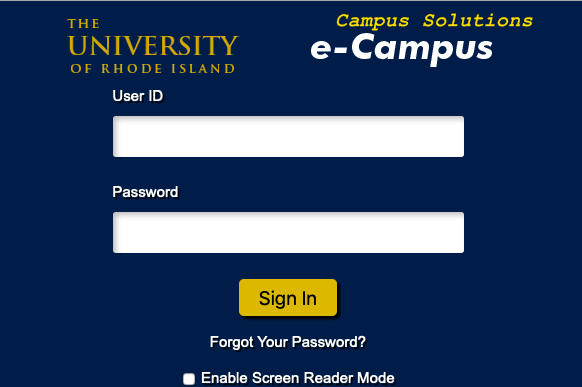 The University of Rhode Island plans to phase out the software PeopleSoft, which is known by students as e-Campus, by 2025 to adapt to modern technology and needs.

According to Christopher Barrett, senior information technologist and a member of URI’s Internal Technologies (IT) Governance, PeopleSoft’s parent company Oracle announced that they will support the current version of PeopleSoft until 2030, but no new updates will occur. This, along with an outdated interface that is not responsive to different devices, were the catalysts for the software change.

“It’s probably going to be good to replace it because e-Campus as it is, you can tell how old it is and how much it doesn’t like new technology,” Ryan Menard, the Student Senate IT liaison said. “It just hates phones, it hates tablets, it just freaks out. I know they updated it recently but it still just doesn’t seem like a good fit for right now. Even Sakai is still fairly usable even though it’s being replaced, as opposed to e-Campus which logs you out every seven minutes.”

“There’s a big server farm in Tyler Hall that they currently manage,” Menard said. “e-Campus is currently stored there, which is easier for us because it’s local, it’s pretty easy to access and we can change it right from here and it’s instant. But I know sometimes the cloud makes it easier. The servers are never going to be technically down. Since it’s cloud-based, they can just move this stuff over to different servers so that you won’t have down server downtime.”

The University’s Chief Information Officer, Karlis Kaugars, said that by transitioning to the cloud, less strain would be put on the University.

Kaugars explained that changing to a new system will take several years. The current transition plan has the IT Gov. researching and planning the project from now until 2021. Between 2021 and 2022, the team plans to implement the human resources module of the successor, followed by the financial module between 2022 and 2023 and the student portal between 2023 and 2025. However, Kaugars said that by starting the process early, they can move at a reasonable pace.

The IT Governance is currently looking into alternatives to the current PeopleSoft program. One alternative is Oracle Student Cloud, a student information service that is also owned by Oracle. Workday is the other major contender to replace the software.

Kaugars said that the services the University is considering are more accessible and congruent with student needs than PeopleSoft.

“These kinds of systems are a huge benefit to the students particular,” Kaugars said. “Some start-ups are developing programs that can see which courses you have already taken. It takes a look at the plan to graduate, figures out which courses you need, then it asks you which faculty members you’d like to be taking courses from. It could ask you if have an outside job, or if you have to be somewhere at a certain time, you need something blocked off on your schedule, et cetera. And then it gives you all the potential schedules that meet your preferences and needs.”

Kaugars said that the cost of a new system compared to PeopleSoft is currently unknown at the moment. However, he currently thinks the total cost would be about the same as the current system.

Students have high hopes for the new system. Menard, for example, believes that e-Campus’s successor could benefit from being more simplified.

“I would like a better enrollment system, because I hate the system and it’s just really buggy.” Menard said. “It’s s not very intuitive and you take a while to learn it and master it. I also feel like it needs to be more of an intuitive way because everything’s hidden behind like folders and stuff like that. If you don’t know what you gotta do, it’s kind of hard.”