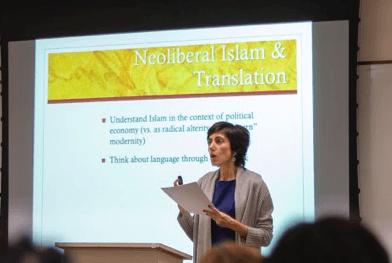 Dr. Evren Savci, an accredited scholar of transnational sexualities, visited the University of Rhode Island on Nov. 7 to speak to students about feminism and sexual politics in neoliberal Islam.

Savci’s lecture outlined key points from her novel, which analyzed sexual politics under Turkey’s Justice and Development Party regime. Savci talked about how certain sexual practices between the LGBTQ+ community have been outlawed and heavily discouraged within the Turkish Republic. However, Islamic matrimony, marriages between cousins, arranged marriages and polygamy are still practiced and accepted in Turkey today.

“How do you analyze contemporary sexual politics in geographies considered to lie beyond the ‘West’ without falling into easy binaries of cultural authenticity versus colonial mimicry?” Savci said. “In other words, without replacing the ideology of anthropological differences.”

To begin analyzing the sexual practices and acceptance within a different country and culture, Savci informed audiences that they must understand Islam in the context of political economy, a medical alternity to “Western” modernity and think about language though translation.

To further her statements, Savci used examples from real-life cases of these experiences between sexual politics and neoliberal Islam.

One of these examples was based around the question, “who killed Ahmet Yildiz,” a 26-year-old gay student who was shot and killed last year out of what many believe to be the victim of Turkey’s first gay honor killing.

Savci said that honor killings are beliefs and acts used to “cleanse illicit relationships.” With Yildiz living in a country that does not support the LGBTQ+ community, Savci explained that his murder has continued to be overstepped and not looked into enough. She said this has denied justice to the gay community and demonstrated the potential dangers of their sexuality.

After her lecture, Savci held a question and answer session for audience members.

Dr. Alana Bibeau, a  professor of sociology at URI and an acquaintance of Savci’s, stated that she believes Savci’s talk benefited students through informing them of how LGTBQ+ communities are treated in different cultures.

“Dr. Savci’s talk, based on years she spent conducting ethnographic fieldwork in her home country of Turkey, shed light on queer studies and its relationship to language and cultural differences,” Bibeau said. “Through in-depth interviews in Turkey and a content analysis of the media coverage surrounding the murder of Ahmet Yildiz at the hands of his father, Dr. Savci illuminated for students the complex relationship between national identity, sexual identity, and language.”

Along with her first book, Savci is beginning a new research project that will examine the failures of Westernization and analyze the sexual practices that have been deemed uncivilized or outlawed by the Turkish Republic.