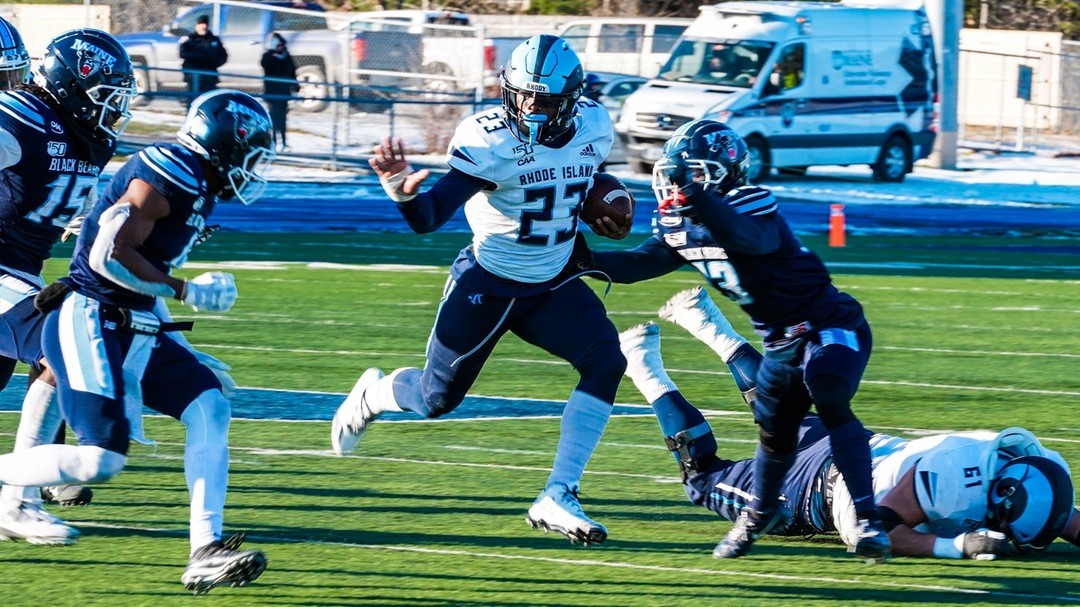 The University of Rhode Island Football team played their final road game of the 2019 season this past Saturday when they traveled north to the town of Orono to take on the Maine Black Bears.

Rhody was looking to avoid losing back to back games as they faced a Black Bears team that was looking to get over the .500 mark on the season. For the third straight week the Rams rotated between two quarterbacks. Freshman Darius Perrantes made his second consecutive start and split snaps with redshirt junior Vito Priore.

Things were going the Rams way in this one, as they jumped out to an early 10-3 lead. Rhody carried this lead into halftime and the Black Bears were set to receive the second half kickoff. URI prepared to rely on stingy play from their defense to open up the second half.

“Our defense went out and had a ridiculous number of three and outs,” Head Coach Jim Fleming said. “I think it was six out of seven in the first half.”

A 45-yard punt on the opening drive of the second half, followed by a 12-yard return by senior receiver Ahmere Dorsey and a 15-yard personal foul penalty on Maine, gave the Rams great field position to start their first drive of the second half. Perrantes was under center for Rhody to start the half and he quickly connected with junior receiver Ivory Frimpong for nine yards.

On third down, senior running back Naim Jones broke loose for a 34-yard touchdown to extend the Rams lead to 17-3 after the C. J. Carrick extra point. Jones would finish the afternoon with 167 yards rushing yards and two rushing touchdowns for his second career 100-yard and two-touchdown game.

Maine finally got in the endzone on a 19-yard touchdown pass to cut the Rams lead to 17-13. Rhody wasted no time getting back on the board. A 29-yard kickoff return by Dorsey set the Rams up again on the Black Bears side of the field.

Priore, now back in the game, connected with senior receiver Aaron Parker for 34 yards, who had his fifth 100-yard game of the season. This set up a first and goal on the Maine 10-yard line. On third and goal Priore looked Dorsey’s way again and this time they connected for the eight-yard touchdown. The Rams then led 24-13.

This touchdown pass for Priore gave him 20 on the year, making him just the second Ram in program history to throw 20 touchdowns in a single season. The only other Ram to do so was Tom Ehrhardt, who threw 36 in 1984 and 42 in 1985. The Rams would carry this 11-point lead into the fourth quarter.

With just under 10 minutes remaining, the Rams led 27-13 after Carrick converted a 38-yard field goal. After the field goal is when things began to go south for Rhody. The Black Bears were able to cut the Rams lead to just seven after a 12-yard touchdown pass that capped off a four-play, 61-yard drive that lasted just one minute and 21 seconds.

Rhody got within field goal range as they looked to extend their lead and bring it back to a two possession game. Carrick missed the 44-yard attempt and the Black Bears took over on their own 27-yard line with 6:18 left to play.

The Rams lead quickly vanished after the Black Bears marched 73 yards down field to tied the game at 27. Another good kickoff return off a short kick and a Maine penalty put the Rams in Maine territory.

Rhody was able to regain the lead on a 29-yard field goal from Carrick, leaving Maine with just 1:47 left on the clock and two timeouts. Special teams play was strong for Rhody on Saturday by helping the offense work with short fields most of the afternoon.

“You look at some heroic efforts on our special teams units who were on fire,” Fleming said. “Returning, coverage I thought it was a tough matchup.”

Maine once again wasted no time and went right down the field. A 44-yard reception put the Black Bears inside the Rams 40-yard line. Four plays later the Black Bears reached the end zone on an 11-yard touchdown reception to take their first lead of the game 34-30.

Rhody took over with 29 seconds left and was able to get to the Maine 18-yard line before time expired and the Rams lost their ninth game of the year.

“We played a really phenomenal football game up until the last two drives of the game,” Fleming said.

Rhody will be back at home this Saturday, Nov. 23, in a 12 p.m. matchup to close out the 2019 campaign against James Madison University, who currently sits at number two in the FCS rankings.