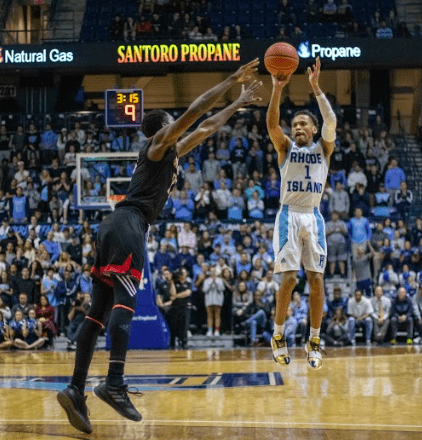 Rhode Island knew this would be no cakewalk.

The upstart Nicholls State Colonels came into Kingston Tuesday night hoping to get their second road victory of the season and to play the role of spoiler for the University of Rhode Island, but ultimately fell short.

Rhody showed a level of maturity that at points they lacked in the previous years campaign, holding steady and not wavering from a game plan that led to forcing 15 turnovers against Nicholls State. The Rams ended the game on a 20-8 run, after trailing 57-50 in the second half.

Fatts Russell proved his toughness as well. After falling hard on his knee in the first half, Russell came back from the training room locked in and engaged on both the offensive and defensive ends. He led all scorers with 24 points and also totaled six assists, a team high.

“I just felt like my team was a little down,” said Fatts Russell. “I can feel their energy and I knew they needed a spark so that’s what I tried to do.”

Relentlessly attacking the paint as well, Russell went a perfect nine for nine from the charity stripe.

“His leadership throughout the game, particularly in some of those timeouts is literally what got us over the hump,” said Head Coach David Cox. “I’ve told this team a number of times, I can lead you and get you to a certain level but championship caliber teams are player-led teams.”

Early foul trouble kept Cyril Langevine on the bench for the first 10 minutes of the second half with four fouls. The senior big man made his presence known when he entered back into the game. In just 23 minutes of game action, Langevine totaled a double-double, scoring 10 points and grabbing 11 rebounds. The contribution of Jermaine Harris can not be overstated in this game either. The second year forward scored 10 points and grabbed four rebounds in 24 minutes of game action. Harris took advantage of his opportunities at the free throw line as well, going a perfect four of four from the stripe.

“I’m confident in all the guys,” Langevine said. “Jermaine stepped up big for me. I came back in and did what I had to do.”

The Rams shooting woes continued in this game, with Rhody going only 3-16 from beyond the arc and shooting 42 percent from the field. URI currently sits tied for 282 in the country in field goal percentage, something they’ll need to change moving forward if they’re to accomplish their championship aspirations this season.

Rhode Island has shown the metal thus far on the young season that matches where their goals are ultimately making the NCAA Tournament. Without arguably their best player making any significant offensive contributions in Jeff Dowtin, and Langevine in foul trouble, the Rams were able to stay composed and pull out what is a good win. It would have been easy for Rhody to fall into a stereotypical “trap game” scenario following a big win over Alabama, but the leadership of the Rams stretched from top to bottom, and moving the Rams to 3-1.

“I thought the resiliency we showed at the end, once again, got us over the hump,” said Cox.

Looking forward, the Rams have dates with North Texas and LSU in Jamaica as part of the Jersey Mike’s Jamaica Classic. This tournament will provide URI with another shot a quality non-conference win when they face off against the LSU Tigers.

“We’ve got two big-time battles down there,” said Cox. “These guys are enjoying playing competitive games right now off the bat. They’re responding very well to them.”