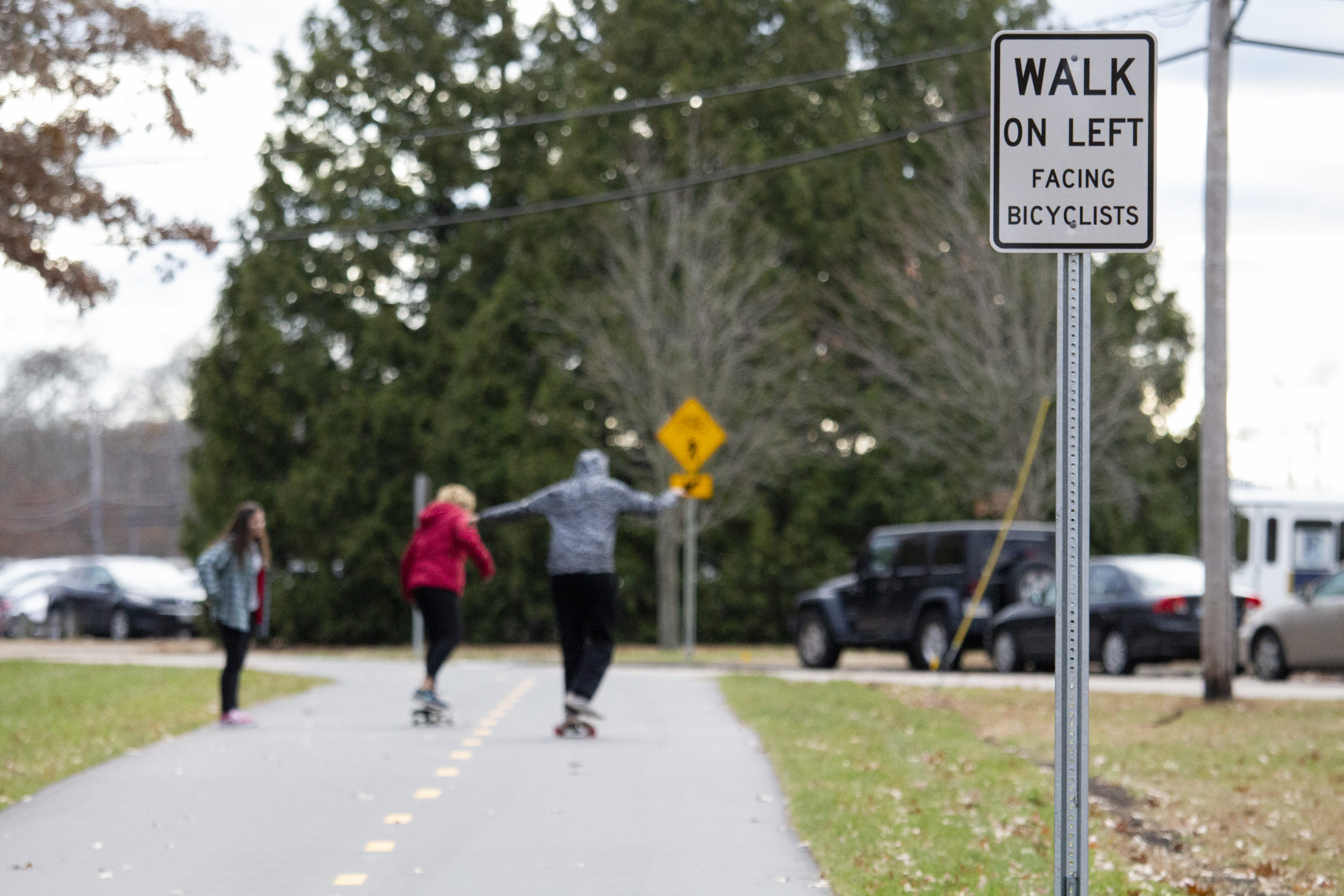 The new bike path officially opened for public use on Monday. Photo by James McIntosh.

The University of Rhode Island’s two-mile-long bike path, which will connect the campus to the William C. O’Neill Bike Path, officially opened during a ribbon-cutting ceremony on Monday that featured University administrators and state officials.

The William C. O’Neill Bike Path extends into Wakefield and Narragansett, meaning that URI community members can now travel from campus to these areas without having to go on the roadways.

“[This gives] all community members a safe, scenic and convenient way to get to and from our campus,” Dooley said.

Carol Thornber, the associate dean of research for the College of Environmental and Life Sciences, emphasized that the bike path will help improve the safety of cyclists.

“[The bike path] encourages others to feel more comfortable cycling to campus,” Thornber said. “I know there’s lots of people I talk with who say ‘I’m just not comfortable with riding my bike to campus, there is not a safe way for me to do that.’ Now there is.”

In addition to improving safety for cyclists, the bike path was praised at the ceremony for its ability to enhance the college experience for URI students.

Student Senate President Nick Marotta said that the bike path will be beneficial for students without cars who are trying to find an inexpensive way to go off-campus. Marotta also said the bike path offers several other benefits.

“The URI bike path will have a positive impact on the students right here at the University,” Marotta said. “Increased physical activity, and awareness of local wildlife and natural ecosystems and decreased stress levels are just a few of the major benefits that utilizing this bike path will provide our students.”

“It is very natural to start that significant work, that expansion of the bike path, here at URI,” Coit said.

Thornbern said the bike path has been a welcome addition to the community by many.

“There has been considerable excitement in the rapidly growing cycling community of South County by the creation of this path, both by commuters and by the recreational cycling community,” Thornbern said.

Before cutting the ribbon to officially open the new bike path, Vice President of Student Affairs Kathy Collins thanked those who were involved in bringing the bike path to campus. This included the University’s senior leadership team, Capital Projects, local elected officials and supporters of the bike path, among others.

Collins said it was a community-wide effort in order to bring the bike path to campus.

“It does take a community,” Collins said. “It takes a community of enthusiasts who celebrate the beautiful Ocean State.”

A map of the William C. O’Neill Bike Path can be found online on the Department of Transportation’s website. URI’s portion of the bike path runs from West Independence Way, which is off Kingstown Road, to Flagg Road.