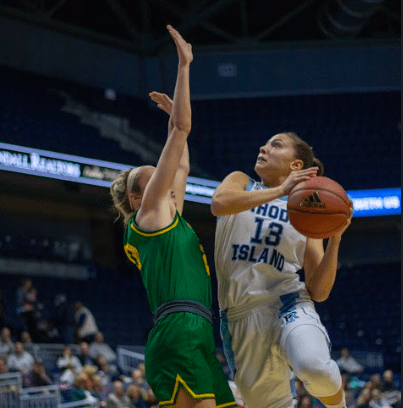 Marta Vargas looks for the shot against Vermont. Photo by Greg Clark.

The Tammi Reiss era has kicked off to a wonderful start.

The Rams currently sit at 5-2, the best start by a first-year Rams head coach since 1977, when Head Coach Nancy Lingham got the Rams off to a 5-2 start.

After a disappointing two games against North Dakota and Boston College, the Rams returned home on Nov. 25 for the start of a three-game homestand against the Vermont Catamounts.

The story of the game was Rams redshirt senior guard Davida Dale. She scored a career-high 25 points shooting nine for 18 from the field and four for five from the three-point line. Dale grabbed 14 rebounds and dished out five assists. She was also responsible for the game-winning three-pointer that propelled the Rams over the Catamounts.

“My main focus was to relax and not rush my shot,” Dale said.

Coach Reiss was pleased about how her team was able to dig deep and come out with the victory.

“This was huge,” said Reiss. “We’ve been on the road for three straight games and you come home, you have the lead and they tie the game up. And to have the resiliency to go into overtime and execute, it does so much to their mindset.”

For the Catamounts, senior forward Hanna Crymble scored a game-high 30 points and snagged a team-high 10 rebounds.

This past Sunday, the Rams returned from their Thanksgiving break and welcomed the Fairfield Stags into town. They established a 29-7 lead at the end of the first quarter, in part to a balanced attack from the starters and the bench.  From that point, the Rams didn’t look back.

The Stags made an effort to cut the lead after the half, but their slow start would prove to be too much to overcome. The Rams defeated the Stags 74-41. They held Fairfield to a season-low 24 percent from the field.

Davida Dale finished with 17 points, eight rebounds and six assists. She was followed by Marta Vargas and Nicole Jorgensen, who both finished with 11 points.

For the Stags, sophomore forward Lou Lopez-Senechal was the only player to reach double figures. She ended the game with 12 points.

As a result of her performances against Vermont and Fairfield, Davida Dale was named A-10 Women’s Basketball Player of the Week for the week of Nov. 25 to Dec. 1.

Yesterday, the Rams faced the Holy Cross Crusaders in their final game of their homestand.

The Rams will look to their defend Ocean State Tip Off Tournament trophy this Saturday as they head to Bryant University to face the Brown Bears in their first game of the tournament. Tip off is at 2 p.m.