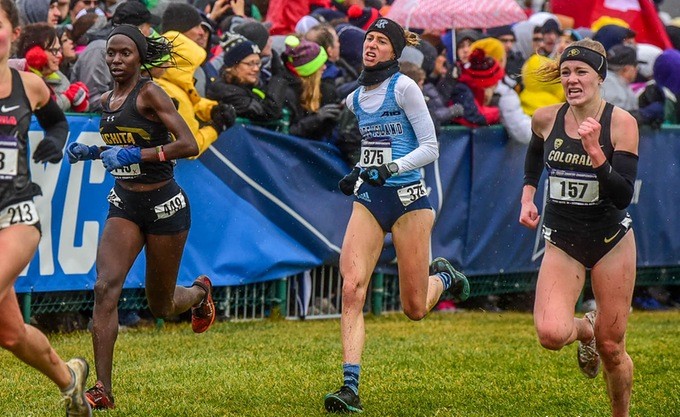 The lone Ram to qualify and compete in the championships was graduate student Lotte Black. Prior to the NCAA championships Black placed first in the Atlantic 10 cross country championship with a time of 17 minutes, 38.8 seconds.

By placing first, Black became the first Ram to win an individual title in cross country at the Atlantic 10 championships.

“Her freshman year she finished 70th in the A-10s,” Head Coach Laurie Feit-Melnick said. “She’s a hard worker and it shows.”

Black was able to qualify for the women’s 6k Cross Country championship when she finished seventh at the NCAA Northeast Regional with a time of 19 minutes, 36 seconds. This time was just eight seconds behind the lead. She was Rhody’s top finisher at the event.

By qualifying at regionals, Black became the first Ram in 18 years and just the third in program history to compete at the NCAA championships. The only others to do so are Erin Silvering (’01) and Stephanie Ulincy (’93). Black joined the 254 other competitors in the championship meet at La Vern Gibson Championship Cross Country Course.

During this portion of the race Black’s time was seven minutes, 8.9 seconds as she passed 35 other athletes to move into 90th place as the final leg of the race approached. Black kept up this impressive pace as she went on to pass 46 more runners in six minutes, 59.5 seconds in the final 2,000 meters to finish the race 44th. Her finishing time was 20 minutes, 54 seconds.

“This is a huge accomplishment because she didn’t run cross country last year,” Feit-Melnick said. “What she has been able to do this season is phenomenal.”

This fall season was the first full cross country season that Black has competed in since her freshman year here at URI.

Black’s accomplishments on the track are something to be proud of, but her leadership and ability to balance school and athletics is just as impressive. On top of competing on the track Black is enrolled in graduate courses. She finished her undergrad in just three years.

Black is also a teacher’s assistant for two of her classes.

“Lotte is one of our co-captains. She’s an outstanding leader, a true role model and very humble,” Feit-Melnick said. Her ability to balance all of this is amazing. She’s all about routine and she’s very driven.”

Black will be back next year as she has another full year of eligibility left. The Women’s Cross Country and Track and Field team will continue to work hard as the indoor track season is right around the corner.