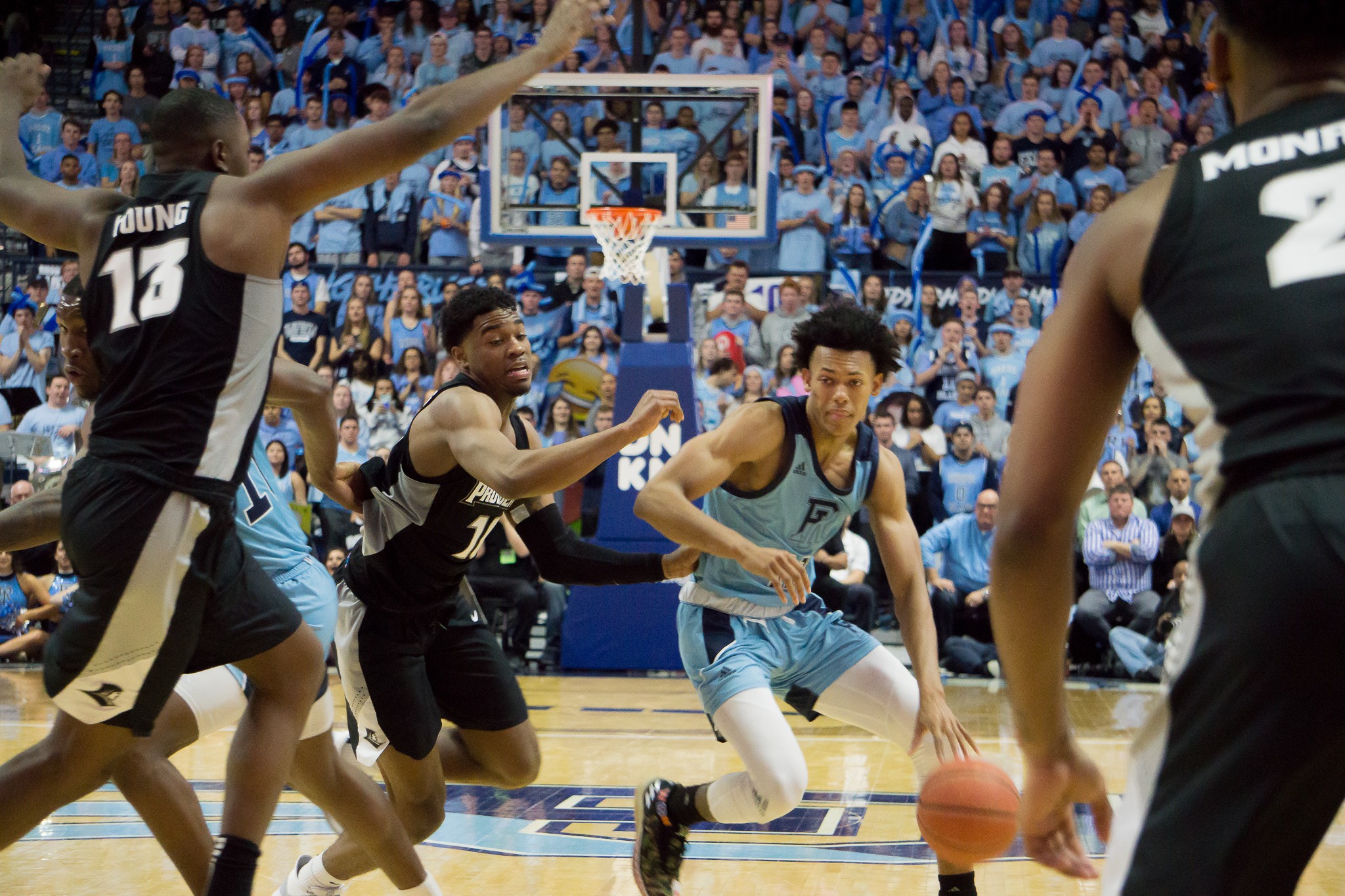 Jeff Dowtin drives into the paint. Photo by Autumn Walter.

A sold-out Ryan Center rocked. The freshmen shined. The Rams won their second game against Providence College in three seasons.

So what exactly did we learn from a Rams team that was in search of a win to pair with their victory over Alabama earlier this year?

Rhody didn’t just beat their in-state rival 29 miles to the north. They dominated them. They controlled almost every facet of the game against the Friars and picked up a crucial win in December by a score of 75-61.

Providence Head Coach Ed Cooley lamented earlier in the week this game was not a rivalry and just another game on the schedule. Call it playing for the cameras or not trying to psyche his team out too much, but the state of Rhode Island knows. The Rams are now 6-3 in their home building in this matchup. The winds of change are blowing, and ever so surely this game is becoming leveled every season.

Rhode Island’s defense came to play in this one which was the ultimate difference. The Rams forced the Friars into 22 turnovers. PC also shot only 38.5 percent from the field and 29.4 percent from three point land. The identity of URI basketball has morphed into a hard nosed and physical brand of basketball, and that was on full display on the evening.

“I was very disappointed in our defensive effort in Jamaica against LSU,” said Head Coach David Cox. “After that game we had a practice and team meeting that next day. We talked about how defense is going to be our identity. Period. That’s non-negotiable. That’s who we have been up to this point.”

Fatts Russell has also blossomed into arguably a top twenty guard in the country. Period. Russell scored at least 20 points in his seventh straight game, as he poured in 24 points. Always looking to create as well, Russell added eight assists to completely stuff the stat sheet. While the Rams offense this season has been kept on life support at times by the junior, the entire team showed out in what could have been labeled an early season must-win.

Tyrese Martin and Cyril Langevine both scored in double figures along with Russell, including what was a monster performance from Langevine. He finished with 17 points and 16 rebounds and continues to be a force on the low block for URI.

The Rams were able to do all this without the contribution of sophomore sixth man Dana Tate. Tate was suspended for one game by URI for a violation of team rules, leaving the Rams exceptionally thin at the forward position.

The last time these two teams met inside the Ryan Center, it was freshman Fatts Russell providing a jolt of energy off the bench to lift the Rams to a win. This go around? Enter Mekhi Long. The freshman forward played stellar defense, showed his offensive ceiling, and looked as poised as a four year starter in what is the most intense game of the season. Long finished with nine points, seven rebounds, four steals and two blocks in 22 minutes of game action.

Rhody now goes to their end of semester break. When they come back transfer Antwan Walker will be eligible to enter the fold, and provide some much needed depth for a Rams team that played only seven men tonight.