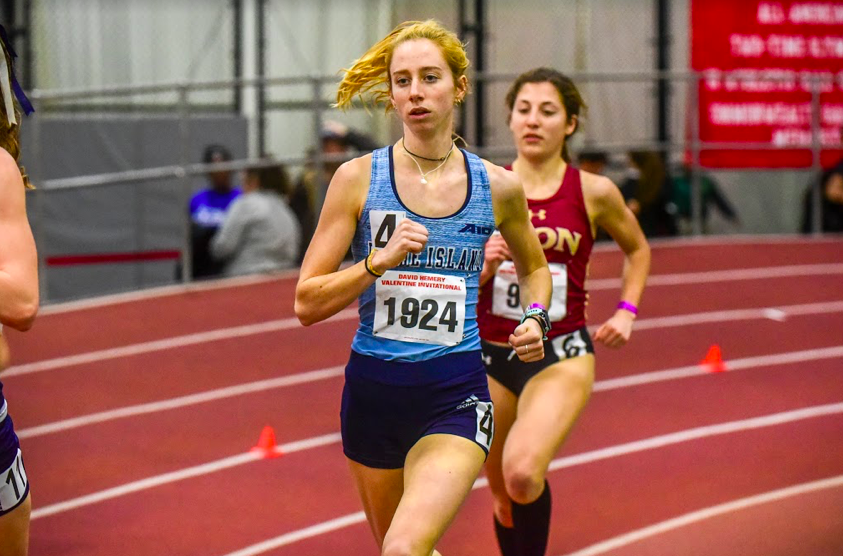 The University of Rhode Island men’s and women’s track and field teams were back in action this past weekend at the New England Indoor Track and Field Championships at the Reggie Lewis Track and Field Center in Boston.

Nathan Coogan’s first-place finish in the 1000-meter run and a victory by the 4x400m relay team highlighted a third-place finish by the men’s track and field team this weekend. Coogan earned his first victory of the season in the 1000-meter run finishing with a time of 2:30. Men’s Track and Field Head Coach John Copeland was impressed with how his team performed last weekend.

“We had good scoring all across the board,” Copeland said. “We scored in just about every event we were entered in and that’s the consistency we are looking for.”

“I thought that it was a really nice performance because he ran smart and ran well. He handled his trials and the final in such a great way.”

The 4×400 relay team improved on their fourth-place finish from last year by winning this year’s relay. The relay team that consists of Anthony Delesanta, Maxwell Dickens, Roniel Mata and Jordan Ross finished with a time of 3:15.

The distance medley team of Collin Ochs, Jordan Ross, Rock Fortna and Kellen Waters finished in second place with a time of 9:59.

In the throwing circle, junior Johnathan Buchanan finished in third place in the weight throw with a distance of 18.15 meters. Teammate Abraham Salako finished eight spots behind him throwing a distance of 16.7 meters.

Lotte Black’s victory in the 1000-meter headlined a fifth-place finish for the women’s track and field team. She earned her second consecutive victory in the 1000-meter at the New England Championships setting a meet and school record time of 2:44. The previous meet record of 2:46 was set in 1995 by Boston College runner Ashley Graham and the previous school record of 2:47 was set by Siobhan Breagy in 2012. Women’s Track and Field Coach Laurie Feit-Melnick was very pleased with how her team performed this weekend.

“We had a solid team meet,” Feit-Melnick said. “I was very pleased with many of the performances this past weekend.”

Feit-Melnick also expressed how “great of a run” Lotte Black had in the 1000-meter last weekend.

The 4×400-meter relay team successfully defended their 4×400-meter crown that they earned last year. The quartet that consists of Kelly MacDonnell, Kristina MacLure, Gabrielle Curtis and Bethany DeLoof finished in first with a time of 3:45. This was also the third straight year that a URI women’s 4×400-meter relay team has finished first at the New England Championships.

The men’s and women’s track team return to action this Saturday for their annual URI Coaches Tribute hosted at Mackal Fieldhouse. The meet is scheduled to begin at 11 a.m.