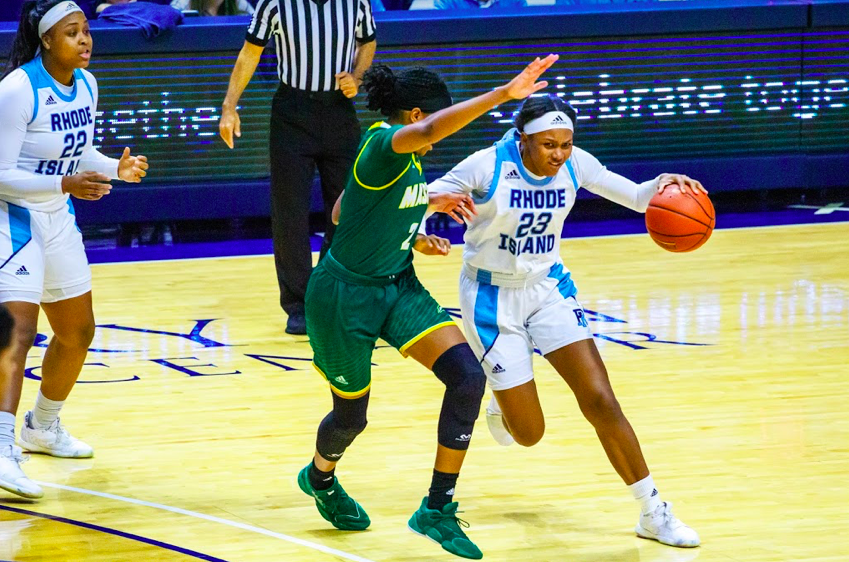 The George Mason Patriots and the Rhode Island Rams faced off in an Atlantic 10 match-up on Saturday, with the Rams looking to get back to .500 in conference play.

Rhode Island was 10-9 (3-4) coming into Saturday and sitting in 8th place, needing a win to stay cemented in the fight for an A-10 Tournament berth.

URI was able to win what was a slugfest against the Patriots, with a final score of 47-42.

“Offensively it was an ugly game on both sides,” said Rams Head Coach Tammi Reiss.

Coach Reiss could not have been more right. George Mason shot just 25.8 percent from the field while going a measly 2-25 from three (8 percent). Rhode Island, however, didn’t fare much better. The Rams made just 16 field goals while shooting 21.4 percent from three-point land.

The contest started scoreless until 7:01 left in the first quarter when senior Nicole Jorgensen broke through with three points the old fashioned way to put the Rams up 3-0. This scoring drought would foreshadow the rest of the first quarter and half, with Rhody up just 12-6 after the first 10 minutes. However, that lead was quickly erased as the Patriots went on a 10-0 run and held the Rams scoreless to start the second. Reigning A-10 Player Of The Year Nicole Cardaño-Hillary contributed eight of the 10 points during the Mason run. An electric scorer in her own right, Cardaño-Hillary came into the game second in the A-10 in scoring at 17.7 points per game.

The two teams combined to shoot 1-17 from three-point range in the first half and just 24 percent from the field.

In the third quarter, George Mason cut the Rams lead to as little as four with 2:47 left. However, the Rams weathered the Patriots run and headed into the fourth up by seven. The Rams held the Patriots scoreless for the majority of the fourth quarter not allowing a single point from 7:36 until two seconds left in the game. Rhody closed out the game 47-42 behind the eighth double-double of the season from Jorgensen.

“My rebounding has really been something I’ve worked on,” said Jorgensen. “People box me out, but my weight loss and conditioning has really helped,”

On the other side, Cardaño-Hillary added a double-double of her own scoring 16 of her team’s 42 points and adding 10 rebounds of her own.

Rhode Island followed up their performance against Mason with a wednesday afternoon contest against the Rams of Fordham, hailing from the Bronx. Fordham was able to upend Rhody 60-50, but URI didn’t go away quietly. Senior Nicole Jorgensen added another strong effort, with 23 points and 11 rebounds for another double-double.