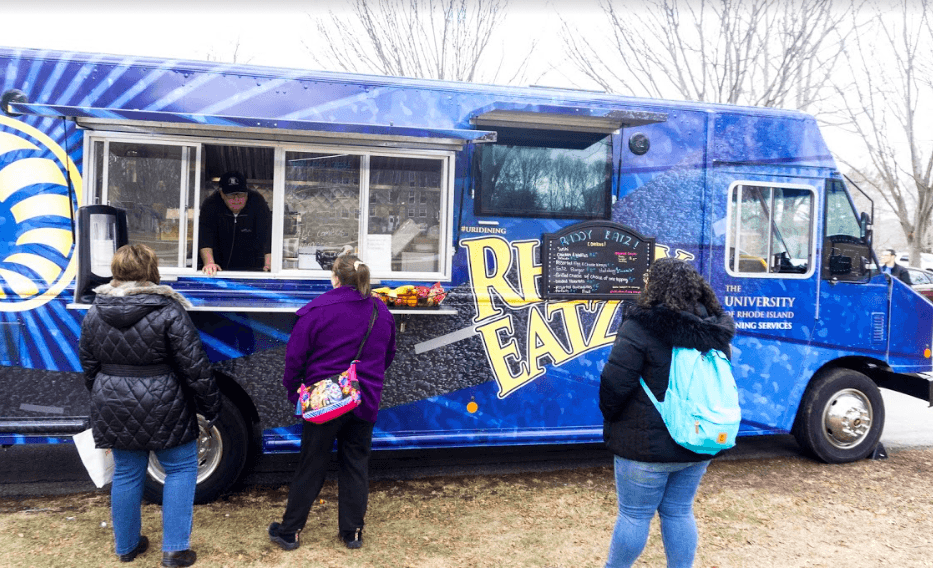 The Rhody Eatz truck provides combo meals to students in a rush. Photo by Autumn Walter.

Many students may recognize a big blue truck while they are walking to class, where they can use their combo swipes for meals on-the-go. That is Rhody Eatz: the University’s food truck, which started serving up food this semester.

Rhody Eatz was made so that students who don’t have time to stop for food, such as commuters, have somewhere to get a snack in between classes. The food served will change more frequently than the dining halls. Currently, the truck’s special is chicken and waffles.

URI’s Dining Services had been attempting to get a food truck on campus for years, but it wasn’t until URI’s Health Services built their Mobile Health Unit that dining services was able to get a truck. It was delivered after the start of the fall 2019 semester, but shortly after, the truck had to be fixed for technical errors. At the end of the semester, Rhody Eatz was delivered back to URI with time to go to a handful of events. It has been out every weekday since the start of the semester.

Pierre St-Germain, the director of dining and retail food services, has been pushing new initiatives, such as the food truck, since he arrived at URI a year and a half ago. The truck was an initiative that was close to his heart, so he worked with the University and the state to get one.

“I would rather respond to student requests [for food], than a group of administrators sitting together and going ‘what do you want to serve?’” St Germain said. “Because in the end students probably know what they want to eat.”

Between the small space, the three fuel types the truck takes, the lack of food storage space and more, Rhody Eatz can be challenging to run. A food truck has the same problems as a brick-and-mortar store plus more. If the truck runs out of an ingredient for a recipe, that food has to be taken off the menu. There is a lot of planning that goes into running Rhody Eatz, according to dining services.

That is why Vincent Joyce, a dining services coordinator, is handling the truck itself. He brings 45 years of experience in the food and catering industry and much more to Rhody Eatz. Joyce is on the truck five days a week working with two other cooks. The three employees serve 150-200 students every day, but that number is likely to grow over time.

Rhody Eatz allows dining services ways to do things that cannot be done from a dining hall. St. Germain already has ideas of some ways that he would like to use the truck in URI’s community.

“I’d like [the truck] to go out one to two days a week, as an event truck so it’s more of a tool for the school as opposed to just a rolling food cart, and to use it as this mini point of conversation,” St. Germain said. “I always say that food is sort of like the universal language that you don’t have to be able to speak. People just by nature know what food is, and we all have to eat. You learn a lot about an individual and certainly an individual’s culture through the food that they eat.”

If you would like to recommend food for Rhody Eatz email dining@etal.uri.edu or visit the URI Student Affairs app.