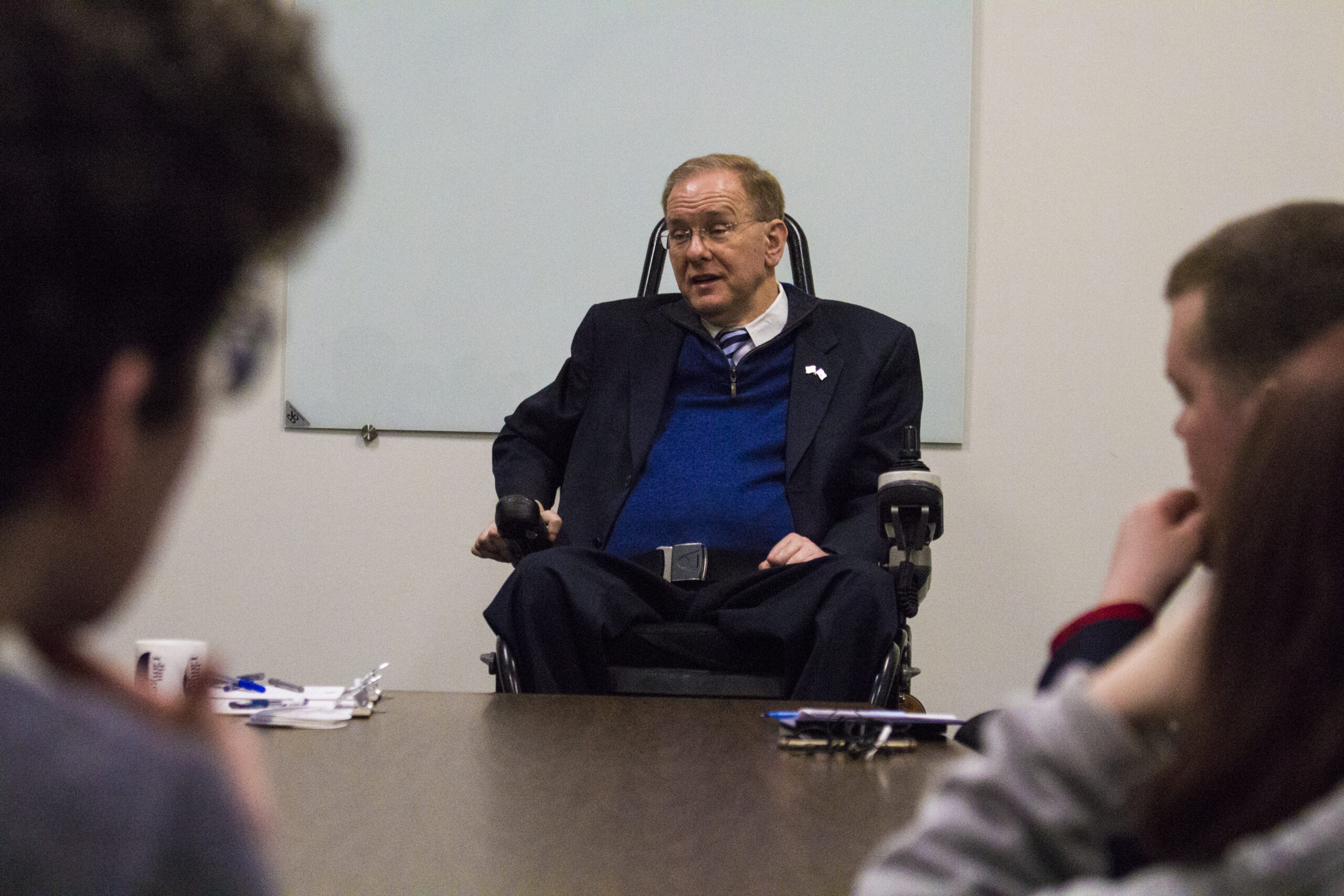 Congressman Jim Langevin participates in a question and answer session with the URI Democrats. Photo by James McIntosh.

The event, which was open to the public, drew about six students, most of whom were members of URI Democrats. Students asked a variety of questions on topics ranging from voter accessibility, national security and civil liberties to advice on how to balance education and holding political office.

A major theme Langevin stressed throughout the evening was the importance of students getting involved with politics.

Langevin, who has held elected office since 1986 when he was an undergraduate, said that he “encourages you to get involved for local, state or federal races,” while emphasizing that reaching out to elected officials and being active outside of the voting booth is important as well.

He also spoke strongly about two issues that he feels are very important to young people and which he is very passionate about: climate change and health care.

“I’m deeply concerned about where we are heading as a country and where the planet is heading and what the ramifications are, both on our survival but also on our security and our economy,” Langevin said, emphasizing that this issue must be kept “front and center,” lest it be “overtaken” by the fossil fuel industry.

On healthcare, Langevin stressed to the students that he views healthcare “as a right, not a privilege.” Langevin was one of the representatives who voted for the implementation of the Affordable Care Act back in 2010, which he said made a “major” difference in covering people who were previously uninsured. Since its passage, the act has been subject to a lot of backlash, mostly from the Republican Party.

Reforming and improving the ACA, as well as other policies such as lowering prescription drug prices, gun control legislation and raising the minimum wage, are all items that have passed by the Democratic-led House but are now in limbo waiting on the desk of Senate Majority Leader Mitch McConnell (R-KY).

“It’s important to show how [in] Democratic leadership, we’re actually getting things done that matter to people, and the Republican leadership is basically sitting on their hands and not addressing the most important issues that affect people’s lives on a daily basis,” Langevin said.

This, Langevin stressed, is why he feels that the upcoming election is the most important election in his lifetime.

“No matter where you put your talents and energies, know that you can make a difference,” Langevin said. “And it’s incredibly important that you are involved right now.”

Allison Lantagne, the president of URI Democrats, said that Langevin’s staff reached out to them to arrange a time for him to come and speak. While this isn’t Lantagne’s first time meeting Langevin or other members of Rhode Island’s congressional delegation, she appreciated the opportunity to interact with him in a smaller group.

Langevin’s Chief of Staff Seth Klaiman was in attendance, as well as two members of his campaign staff.  One staff member was Alexa Simard, a URI senior graduating this spring with a degree in political science and a minor in justice, law and society.

Simard first got involved with Langevin’s campaign as a volunteer in 2018. Last spring, she took an internship in his district office. A month after finishing, she emailed someone who she had worked with for Langevin to say that she wanted to go back to work on the campaign. She’s now been hired and works for Langevin’s campaign staff. Right now, she does a little bit of everything, from coordinating student and volunteer groups to helping with events and fundraising.

“It’s still very surreal to me,” said Simard of working on a congressional campaign. “I’m coming here and talking to student groups and I’m like, ‘I am a student.’ I’m just so happy to be on this side and to see students getting involved.”

Langevin has been in public service since 1986 when he was first elected as a delegate to the state of Rhode Island’s Constitutional Convention. Following that, he successfully ran as a state representative, a position that he held until he ran for Secretary of State, a position that he held for six years starting in 1994. In 2000, he was elected to serve as one of Rhode Island’s two representatives in the House, where he has served ever since.

He is up for re-election in 2020 and so far has one challenger, former State Representative Bob Lancia, a Republican from Cranston.

University moves to remote learning for rest of semester