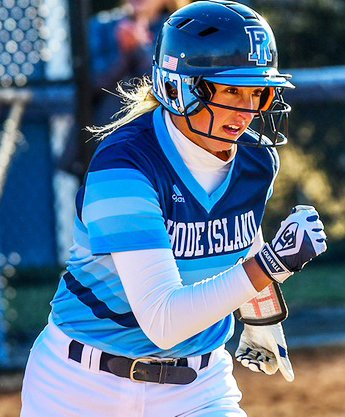 Photo from GoRhody.com: Softball split their series this past weekend

The University of Rhode Island Softball team travelled down south to face Charlotte and North Carolina A&T in the First Pitch Classic this past weekend. On the road the Rams went two-of-four, starting strong with two victories.

Senior pitcher Sarah Gunderson’s stellar performance on the mound contributed heavily to Rhody’s split weekend. In her debut appearance this tournament against Charlotte she was able to hold the ‘49ers to two in the first two innings off of two hits and limiting herself to one walk.

“The rest of the game being scoreless was due to the incredible defense I had behind me,” said Gunderson. “It takes a lot of pressure off when you know how great of a defense you have behind you.”

The bats were hot at the plate the first three innings for Rhode Island. First baseman, Erika Yeager, drove in a run on a two-out single; short stop Ari Castillo also drove in two on a double. Sacrifice fly from Sami Villarreal gave the Rams an insurance run putting them up 7-2.

The team propelled their offensive energy moving forward taking on North Carolina A&T, where they picked up their third win of the season. Freshmen Rachel Zingerman shot a three-run homer out in center field during the top of the second to put the Rams up early. Gunderson threw five scoreless innings before Piper Miguire stepped onto the rubber for the last two. Miguire allowed two RBIs in the bottom of the seventh, but was able to hold the Aggies to just that.

Charlotte and North Carolina A&T were able to defeat the Rams their second time around. Charlotte took an early lead Saturday, but doubles from Faith Musselwhite and Villarreal in the third made it anyone’s game. However, unearned runs that allowed the ‘49ers to take the lead in the fifth inning allowed them to come out on top.

Rhody handed the Aggies their first win of the season on Sunday. The team fell short, unable to match their opponents 6-1 lead in the fourth. The Rams put up two unearned in the bottom of the seventh hoping to rally back, but were held 6-3.

“I think the biggest thing we need to work on at practice is situational hitting,” said Zingerman. “We as a whole left a lot of base runners on in scoring position, so I think if we focus on that during practice then we will surprise a lot of people this year.”

Next, Rhode Island Softball will head to the peach state for a five-game, action-packed weekend in the Bailey Memorial Tournament hosted by Kennesaw State. They will play two games Friday, two Saturday and one on Sunday.