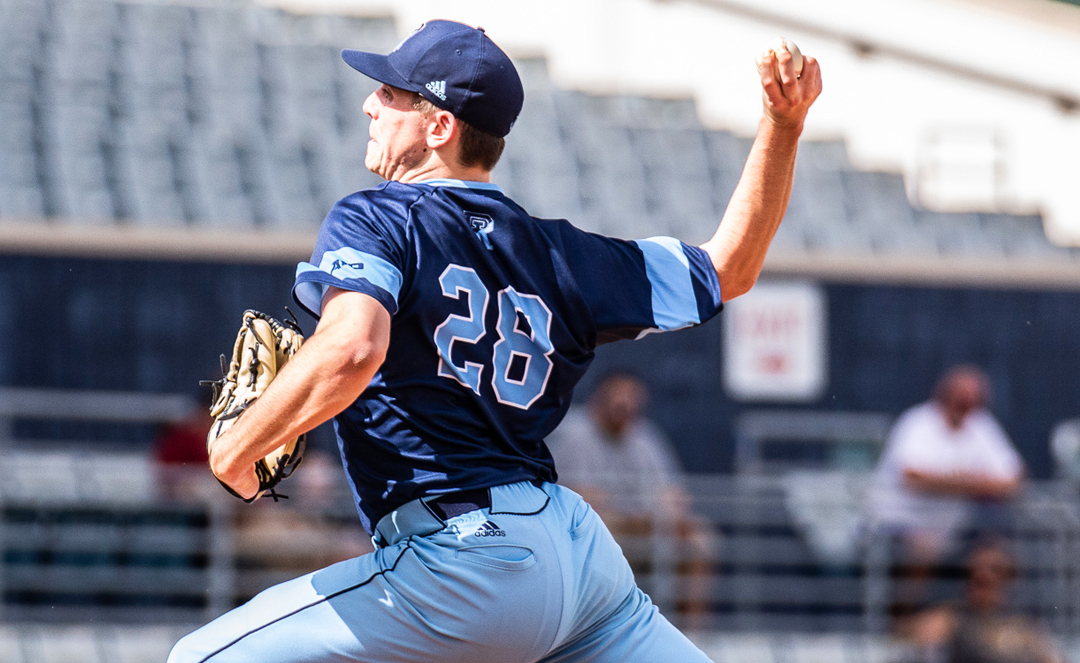 The Rhode Island Rams and Maryland Terrapins squared off over the weekend for a three-game set in College Park. Maryland would go on to take two out of three from the Rams.

“Overall it was a disappointing weekend,” Rams head coach Raphel Cerrato said. “ We were in all three games and we had chances to win them all.”

On Friday, with the game-time temperature at a chilling 31 degrees, redshirt-sophomore Justin Cherry was on the bump for Rhode Island. Cherry went just 2.1 innings before leaving with an injury.

“Justin had something wrong with his finger,” Cerrato said. “I don’t know if it was a blister or the cold but he had to come out.”

After Cherry’s premature exit the Rams’ pitching struggled, allowing 19 Maryland hitters to reach base via either a walk or hit by pitch.

“You aren’t going to win many games giving out 19 free bases like that,” Cerrato said.

Saturday was the Jackson Coutts and Xavier Vargas show for Rhody in their 11-8 win. Coutts finished a triple shy of the cycle, while Vargas went 2-5 and launched two long balls.

“Xavier’s done a lot better of a job hitting the ball to all fields this year,” Cerrato stated. “He’s getting so much more backspin on the ball it’s allowing him to hit with power to all fields. His average will pick up but the power is there right now.”

Cerrato had nothing but praise for Coutts’ hot start as well, “He’s done a great job of using the whole field as well, I was really impressed with how he’s hit the ball to left-center so far.”

Freshman Tino Salgado added to the offensive onslaught with a double, a hit that all but solidified the starting third-base job that had been up in the air before the weekend.

Cerrato employed a few uncommon bullpen tactics on Saturday by bringing in senior closer Tyler Brosius in for the start of the seventh inning. He allowed just one hit in three innings of scoreless relief, which was good enough to earn the save.

“The ball was flying out of the yard that day and Tyler is one of the best, if not the best, guys at keeping the ball on the ground in the country so I felt comfortable bringing him in then and for multiple innings,” Cerrato said.

“Later in the year Tyler probably would’ve been available Sunday, but we had a plan for Sunday if this happened,” Cerrato added.

“Burke was really good for them,” Cerrato said. “He had a mid-’90s fastball and that’s how he got us out.”

Vitaly Jangols had the ball for the Rams and had a good start of his own allowing just two runs over 4.2 innings. Charlestown, Rhode Island native Sean Sposato relieved Jangols with his second collegiate appearance throwing 3.1 innings of one-hit ball.

“The plan was for Vitaly to go four or five innings and then have Sean come out of the bullpen,” Cerrato said regarding their game plan for Sunday. “He came up big allowing just that one hit that was a home run, a home run that probably wouldn’t have been gone at our field.”

Allowing just three runs Rhode Island put themselves in a position to win but they couldn’t come up with the big hit.

“We had a chance to win the game in the ninth with two guys on but we couldn’t come up with the big hit,” Cerrato added.

Rhody ultimately fell 3-0 to the Terrapins.

URI will travel to Tucson, Arizona to play four games in three days against Central Michigan on Friday and Saturday and No. 25 Arizona. All games can be seen on Pac-12.com