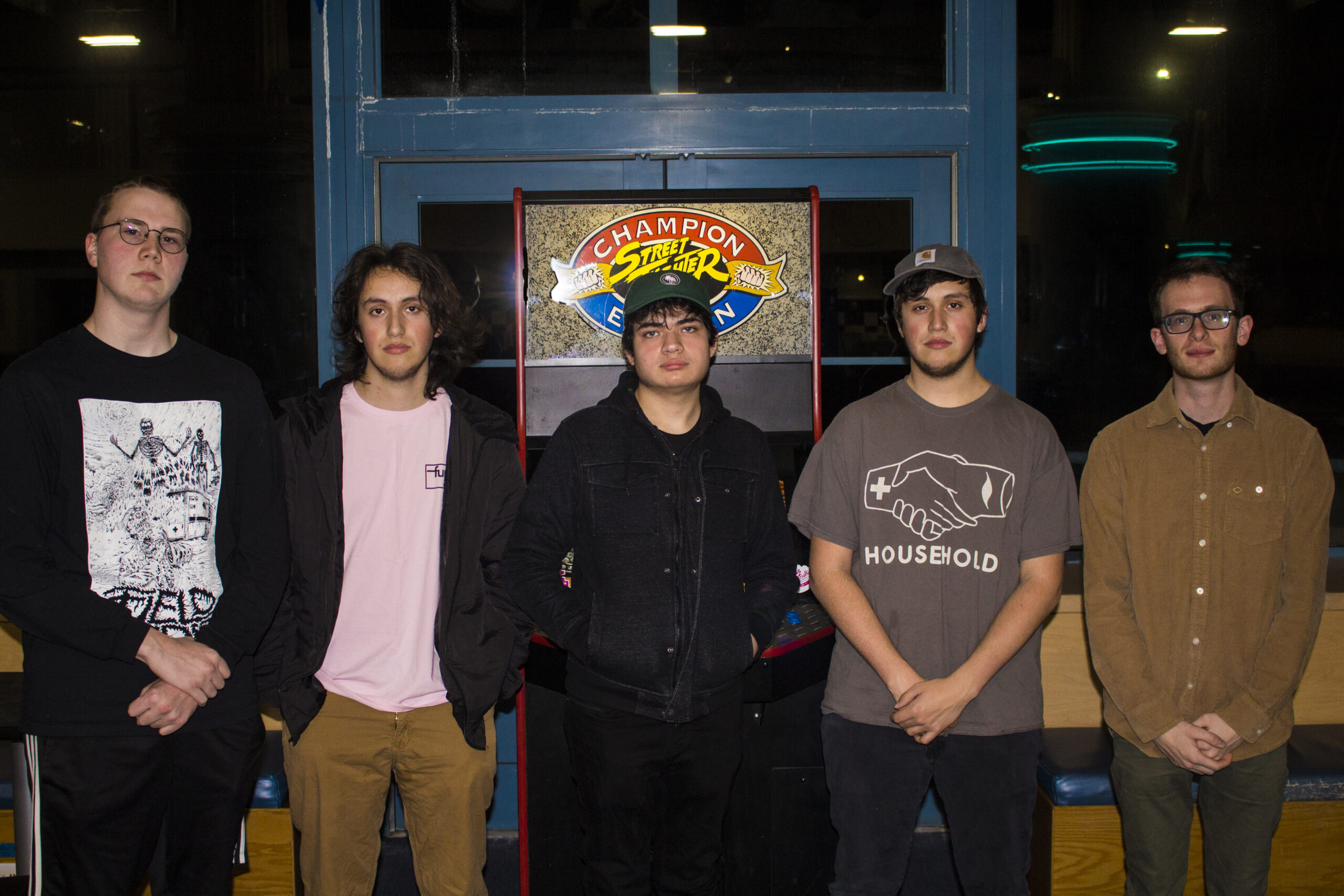 The band “Hope”, made up of URI students. Photo by James McIntosh.

The new five-man band Hope brings their mixture of melodic and post-hardcore rock music to the University of Rhode Island, where most students have never heard their style before.

The band members include junior Lincoln Dark on guitar, senior Matt Pezzullo on vocals, sophomore Matt Tyler on bass and sophomore brothers Cameron and Kevin Hart on drums and guitar.

“I would say our genre is post hardcore or melodic hardcore,” Dark said. “When we chose to play this genre we said that URI needs a hardcore band and we did it when we got here.”

The band takes a DIY approach to their music so each band member contributes to the overall recording. Pezzullo serves as the lyricist of the group and thinks about his surroundings when writing lyrics for their music.

“When it comes to lyric writing, I just listen out for the vibe of the song and I feel that whatever influences were drawn from it,” Pezzullo said “I try to think of past experiences and there are things I want to talk about. If it is an aggressive song, there are going to be some lyrics that are more pointed and angry. If it is more mellow, maybe it is more introspective, sad and depressing and things like that.”

Hope started working as a unit earlier this year, and held their first concert at a Musician’s Guild open mic night on Feb. 7.

Kevin Hart has seen mainly positive reactions to the music that is considered new to the URI campus.

“The biggest reaction we have had is shock I guess, but we definitely have not had a negative reaction and we all really enjoy the sets,” Kevin Hart. “One of the biggest reasons for forming this band is to expose the populous to this kind of music.”

The band members found each other on campus based upon their own shared beliefs on music.

“I guess it would just be making music that we all emotionally connect to,” Cameron Hart said. “We are all people that have similar things we are into and similar beliefs. It was pretty incredible to get all five people that believe in the same message and attitude.”

Every band member comes from a slightly different background with Dark finding a passion in music recently.

“I hadn’t played guitar until last summer when I lived on campus at URI,” Dark said. “I thought it would be a cool thing to learn with the extra time I had on my hands between work and summer classes.”

On the other hand, brothers Cameron Hart and Kevin Hart have been playing drums and guitar since they were 13 years old.

Bassist Tyler originally joined the band based upon the message and work ethic of Hope.

“A lot of people play music for networking or to make money or for some external reason and for us it is about making music and playing fun shows and having a good time,” Tyler said. “I think it is something that we are proud of and one of our accomplishments is our DIY ethics and making something meaningful.”

With a demo scheduled to come out in the summer and another home based show on March 6 right outside campus, Hope wants to simply try their best to promote their newly developed band on Instagram, @hopetheband_ri.

“We just want to push as hard as we can and we want our music to be heard,” Cameron said.