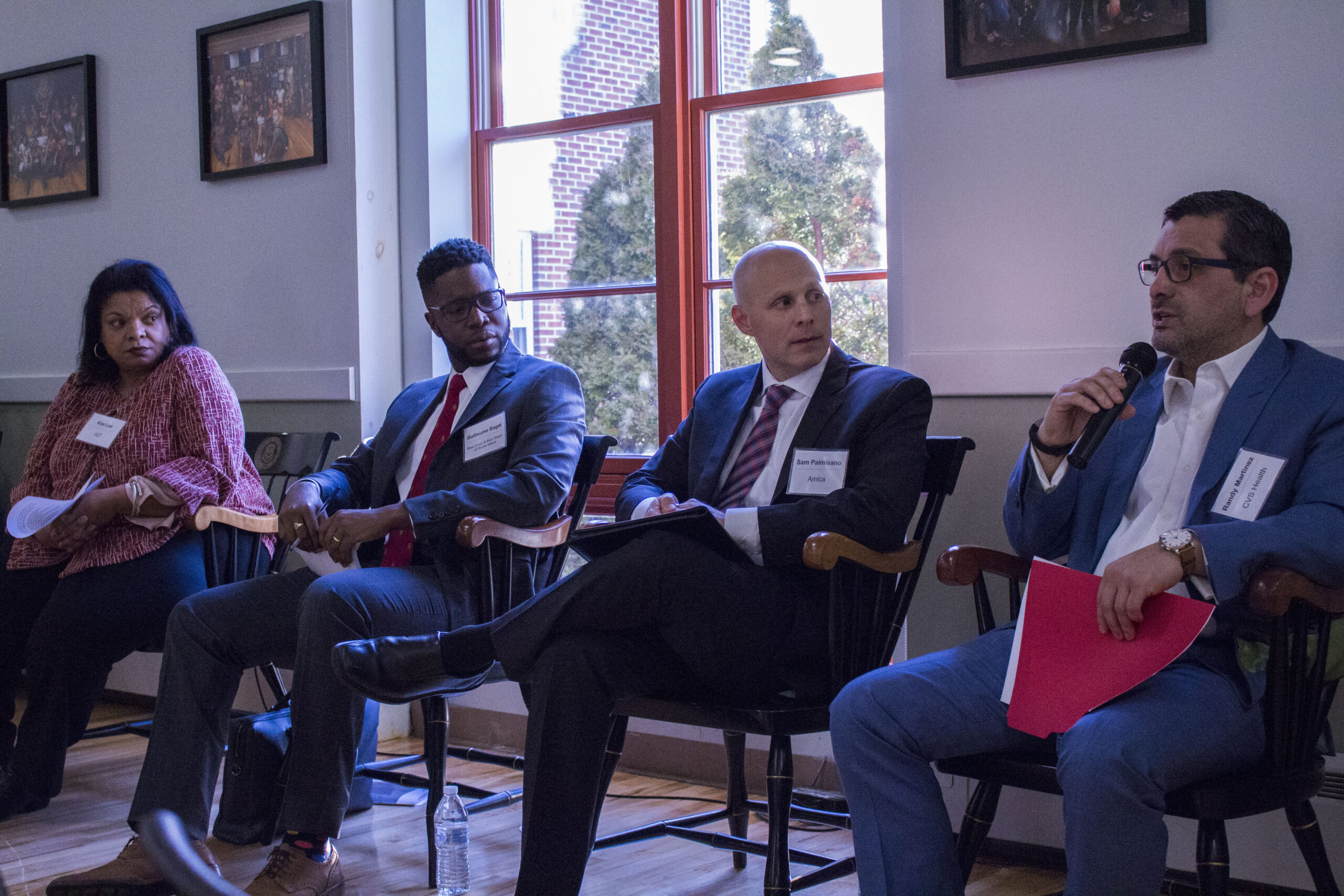 Representatives from Blue Cross, CVS, Amica and IGT formed the panel that spoke on the benefits of diverse hiring. Photo by James McIntosh.

Four professionals from different industries discussed the impact of diversity and inclusion in the workplace at a panel titled “The Value of Diverse Hiring.”

Throughout the presentation, the panelists emphasized the common experience of living in different communities and within different cultures. When talking about his upbringing, Bagal, told the audience that he had moved 15 times, including living in Cameroon and France. Likewise, Martinez stated that he had lived in nine different places.

Bagal connected his moving history to the concept of diversity as a whole, and pointed out how much different cultures impact diversity.

“The definition of diversity and inclusion is going to change over time,” Bagal said. “Currently, at Blue Cross Blue Shield, we see diversity as a definition of human characteristics that make us who we are, both the differences and the similarities.”

The panelists also discussed the issues each of their companies were facing when it came to making their workplace more inclusive. For example, making transgender employees feel accepted and comfortable at work during their transition was an issue Palmisano addressed.

Palmisano also explained that geographic location is a factor that makes diversification of his company harder in some areas. He cited Amica’s offices in Concord, New Hampshire and South Portland, Maine as ones where making the workplace more diverse has been a large struggle, since their populations are majority white.

Diversity goes beyond solely meeting quotas for marginalized groups, as each panelist pointed out.

“I try not to focus on the numbers, because there are so many things that impact [them],” Lee said. “Sometimes, in organizations, we forget what’s going right and focus on numbers.”

Panelists also discussed the progress each of their companies had made in terms of  diversifying, particularly with the impact of globalization. According to Lee, at IGT there could be a single team with individuals from 10 different countries.

The panel opened the floor to audience questions. One question came from student Jay Ramos. Ramos, a health studies major. Ramos, who has dreadlocks, said that he had dealt with people telling him to cut his hair to “look more professional,” and asked the panel what their thoughts on the matter were.

Every panelist urged Ramos that his hair should not be an issue, and if a company considers it one, that’s their problem and not his.

“Remain authentic. Be yourself,” Bagal said. “To be blunt about it, most of these hair policies are racist.”

Each panelist gave the audience pieces of advice in order to prepare for a global market. Martinez urged students to “understand [their] unconscious bias,” and learn to manage the tensions caused by differences.

Palmisano told the audience that they should learn a second language and gave them two additional pieces of advice: to work hard and be nice to people.

Following the panel, attendees each got a chance to interact one-on-one with each of the panelists and pose further questions on the topics discussed.