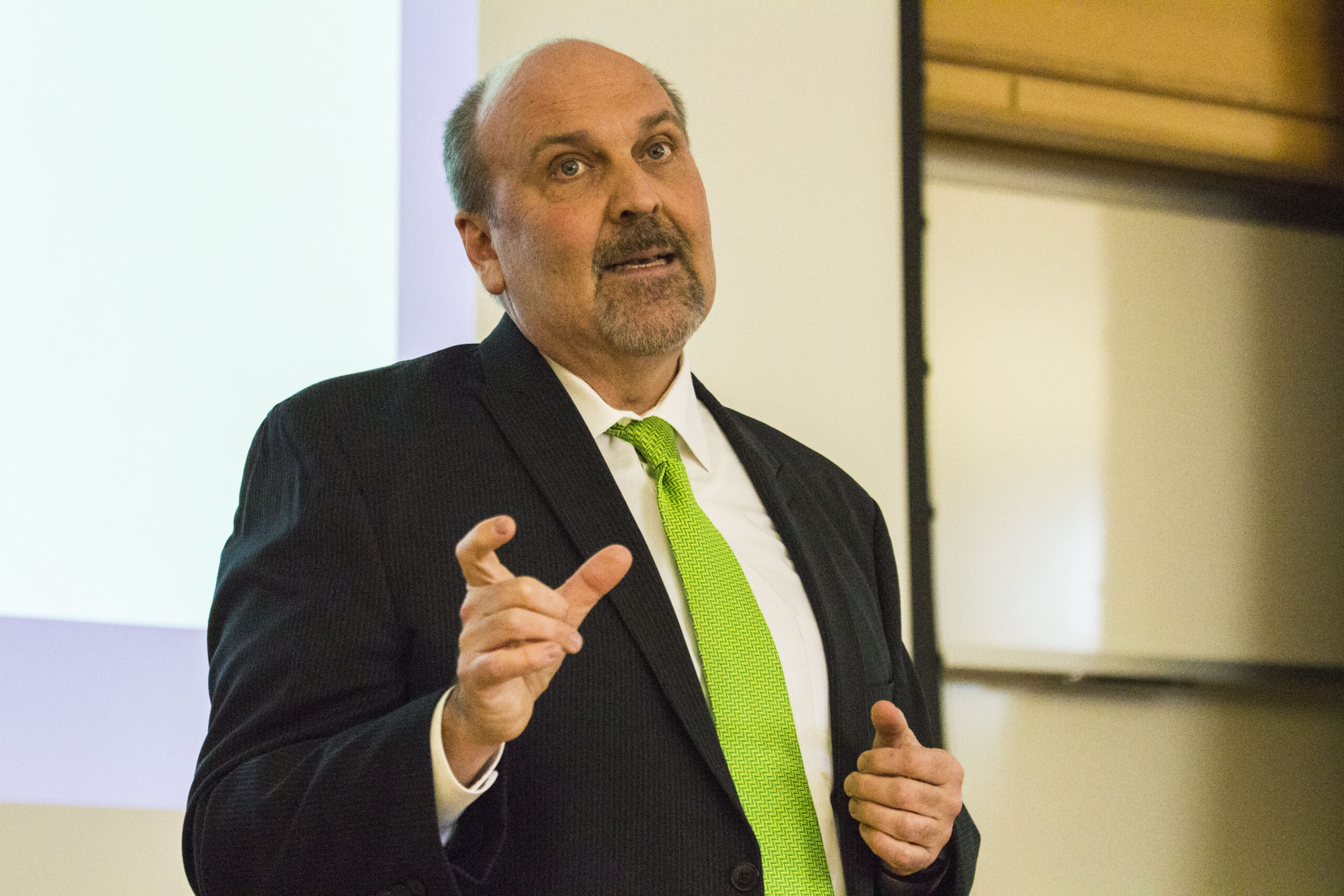 Thomas Blackwell, the Director of the DEA’s Northeast Lab, speaks about the various ways drugs are smuggled into and around the country. Photo by James McIntosh.

By James McIntosh – Photo Editor who somehow didn’t learn his lesson from last week and convinced himself to write ANOTHER article thinking he would get it done on Friday or Saturday and definitely not put it off until Monday night, the day before he has 2 EXAMS WITH NO BREAK IN BETWEEN THEM!!! No pressure, right? Anyway, here’s my second article.

What are the most bizarre ways that drugs have been smuggled into the United States? The director of the U.S. Drug Enforcement Agency’s (DEA) Northeast Lab Thomas Blackwell told students the answer at last week’s Forensic Science Seminar.

The presentation was part of the University of Rhode Island’s weekly Forensic Science Seminar series, in which professionals explain different forensics topics. In this week’s presentation titled “You Found Drugs in That?,” Blackwell spoke about the many methods of drug smuggling in the U.S. These range from brilliant to laugh-out-loud ridiculous. He also discussed the various ways that the drugs were discovered, whether that be through common sense or dumb luck.

One of the most interesting forms of smuggling discussed was the saturation of drugs into objects such as clothes, paper or the linings of suitcases.

“What [drug smugglers] do typically is take several kilos of, say coke or heroin, hydro-chloride, which is water soluble, throw it in the bathtub with some water and then just keep throwing clothes in there until all the liquid is soaked up,” Blackwell said.

According to Blackwell, the clothes are then hung out to dry, packed into a suitcase and sent off with a drug carrier. However, this method has its issues. One occurs when a carrier who is five-feet tall is packing clothes that are for a larger individual. The other issue is that when the drugs are saturated into the clothes, they often become supersaturated. This results in the clothes becoming flaky and stiff, with the dried-out drugs falling from the clothes as a powder.

The drugs are removed from the saturated clothes through a process involving soaking the clothes repeatedly and straining the runoff into a container, which is then heated to evaporate the water, leaving only the drugs.

Ensuring that they get all the drugs out of whatever smuggling device is used is arguably the highest priority of the DEA, as smugglers are sentenced based on aggregate weight of the drugs, according to Blackwell.

URI chemistry professor Jimmie Oxley pointed out how this differs from other forensics scenes, such as explosives, for which the weight or amount of explosives used has no bearing on sentencing.

“There’s no need to try to quantify with explosives,” Oxley said. “[This is] very different from a forensic lab point of view.”

Another commonly-found smuggling technique is body carries. In this method, the drugs are sealed, usually hard compressed in either cellophane, latex condoms or the fingertips of latex gloves. They are then swallowed or inserted into other parts of the body. Blackwell stated that a carrier might swallow hundreds of these packages.

However, this method is high-risk. When discussing Nigerian heroin smugglers in Baltimore, Maryland, Blackwell recalled how often the bodies of dead Nigerians were found in the streets of the city, only for it to be revealed that they were drug carriers.

“If one of those [packages] breaks open in your gut, that’s it,” Blackwell said. “That’s pretty much done, because a lot of that stuff is almost pure heroin.”

Among some of the less lethal but more humorous forms of drug smuggling is using herbal sticks in an attempt to conceal their drugs. Visually, this looks convincing. At a glance, one would never guess drugs were concealed inside. However, sight was not how these drugs were discovered.

“The thing with these herbal sticks, they’re like balsa wood, they weigh next to nothing,” Blackwell said. “However, when we got the seizure in, they were very heavily weighted.”

This extra weight came from the 480 grams of 75 percent pure cocaine concealed inside the sticks.

“[Each individual chess piece] is made out of heroin, and the they intricately paint the thing to make it look like an actual piece,” Blackwell said.

The issue with these forms of concealment is that while they often work and will pass muster from the visual and weight perspective, you cannot fit very much product inside.

After spending an hour describing these and other forms of smuggling, Blackwell spent the remainder of his time answering questions regarding the details of his job, other cases and how one might become a DEA forensics agent.