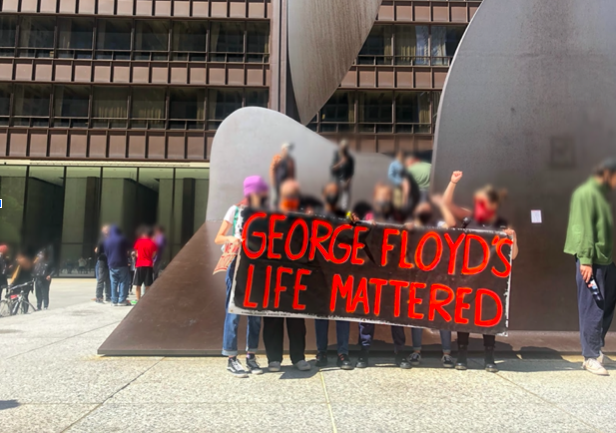 Protestors against racism and police brutality gather at Chicago’s Federal Plaza on May 30, 2020. Photo by Imani Fleming.

Over the last three weeks, the Black Lives Matter (BLM)  movement has gained momentum and exposure in a way like never before.

According to its co-founders Alicia Garza, Patrisse Cullors and Opal Tometi, BLM is “a global organization in the [United States], [United Kingdom] and Canada, whose mission is to eradicate white supremacy and build local power to intervene in violence inflicted on Black communities by the state and vigilantes.”

The uproar in support for this social justice movement sparked when a video of 46-year-old George Floyd being arrested at the hands of Minneapolis police was released. Police officers were called to the scene at a local convenience store after Floyd was thought to have purchased a pack of cigarettes with a counterfeit $20 bill by one of the store’s employees.

He was then pinned down for eight minutes and 46 seconds, an officer kneeling on his neck until he was killed.

Even after repeatedly telling the officer choking him to death, Officer Derek Micheal Chauvin, that he could not breathe, Floyd was murdered in broad daylight.

In the beginning, what many failed to realize was that George Floyd’s murder was just the tip of the iceberg; the hundreds of Black lives lost at the hands of police brutality have been an ongoing issue in this community for decades.

With the rise in use of social media to bring light to social issues across multiple platforms, this time, the fight for the liberation and equality for members of the Black community looks and feels a lot stronger than most of us have seen in our lifetimes.

There are full communities around the world dedicated to this movement and everything it entails. Fundraising, protesting, hosting conversations and petitioning are merely at the surface of what activism for this cause looks like.

Entire organizations and nonprofits committed to the betterment of education, the arts, healthcare and more within the Black community exist nationwide and will continue to work against the inequality of Black lives in our society.

I’ve always viewed growing up in Chicago to be a privilege. If you were to ask anybody from my city where they’re from, I can almost guarantee their response will be nothing less than prideful and almost boastful, (myself included).

There are so many special things about this place, and trust me I, and every other Chicagoan could go on forever. But my favorite part has to be the ceaseless passion and inclusivity of its people. I have never felt that to be more true than I did on May 30, 2020 and June 6, 2020.

I have been able to attend two beautifully-organized, peaceful demonstrations here in Chicago, in protest of the current injustices facing the Black community. The first was a caravan protest driving through the city to help begin the process of gathering peaceful protestors and to drive past Cook County Jail and Juvenile Detention Center or the Metropolitan Correctional Center and Immigration and Customs Enforcement (ICE) headquarters, honking and speaking out against mass incarceration.

Thousands gathered with signs, first aid supplies, snacks, flags and, of course, face masks. This march was led by activists from Black Lives Matter Chicago and other groups fighting locally for justice for the Black community in Chicago.

The demands being called for by protestors were: police reform, sustainable transformation of Black communities and neighborhoods, defunding of the Chicago Police Department (CPD), economic justice for the Black community and to convict every single police officer involved in the senseless taking of a Black life. Most recently this includes the police officers who murdered 27-year-old Breanna Taylor, 25-year-old Ahmaud Arbery, 38-year-old Tony McDade and 46-year-old George Floyd.

Among the thousands protesting that Saturday afternoon, 240 protestors were arrested and taken into custody by CPD, according to ABC7 Chicago News.

However, what I saw that day was much more than any news story could ever cover.

I witnessed people from all backgrounds and all walks of life marching together, harmoniously, for something bigger than themselves.

To me, it was evident that every person that chanted “No Justice, No Peace!” meant it with everything in them. To see the strength and determination of so many people all at once was an emotional experience I was unprepared for.

Similarly to May 30’s downtown protest, I marched with thousands of allies and fellow members of the Black community on June 6. We gathered at a park in the city, Union Park, and were lucky enough to hear from guest speakers, poets, artists and activists.

This peaceful protest was organized by Activate Chi, a grassroots collective focused on fighting police brutality and racial inequality. One of its founders, Dom Brown, reminded an estimated 38,000 protestors that Black Lives Matter is more than just a hashtag.

The demands of the organizers at this gathering,

The organizers sent tChicago Police Department (CPD) district commanders demands including limited police presence at the protest and that police officers do not show up in riot gear. They also called for the firing and criminal prosecution of all Chicago Police officers who exercise excessive force against protesters, release and pardon of all arrested protesters in the custody of the CPD, resumption of Chicago Transit Authority (CTA) services during protests and the removal of the citywide curfew.

All demands were complied with, citing collaboration is possible.

Even though I attended the two largest gatherings within the last few weeks, there have been marches, rallies and peaceful protests everyday in Chicago since May 25. Stretching all the way from the north side neighborhoods to the south side, big and small, Chicagoans have been showing their support for everything Black Lives Matter stands for, in every way possible.

Personally, it has been an overwhelming past few weeks, both positively and negatively. Support coming from every community and group I belong to, with eager friends ready to learn, has allowed me to not only educate myself more, but also become the proudest member of this community I love so much, that I could be.

There is no end date on the fight for justice. The work activists within the Black community spend their lives completing goes far beyond what many can imagine and it is because of them that this movement has progressed and will continue to gain power from its supporters. This is just the start.