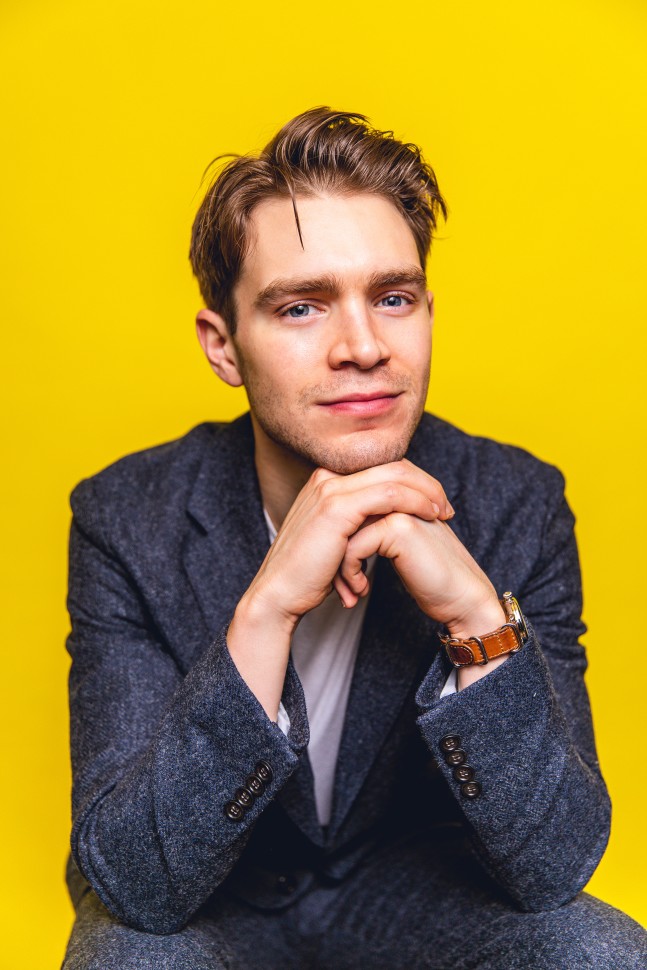 “I very much view teaching as sort of a sacred form,” Andrew Burnap ’13 said with conviction. “Always have. I sort of dreamed of passing on what I’ve learned from all the different academic institutions I’ve attended.”

One of those different academic institutions Burnap spoke of was the University Rhode Island, where he earned his Bachelor of Fine Arts. Since graduating, he went on to get his Master’s from the Yale School of Drama and has performed in Shakespeare in the Park, and most notably, in the hit two-part play “The Inheritance,” marking both his West End and Broadway debuts.

This semester, Burnap returns to URI to teach THE 111: Introduction to Acting. With Broadway, and theatre at large, being shut down due to the pandemic days before the play was meant to reach its closing performance, Burnap decided to reach out to David T. Howard, chair of the theatre department, to talk about potential workshops and teaching opportunities. It just so happened that there was a vacant spot for THE 111.

“We had determined that maybe we should ask him [to fulfill the position],” Howard said. “It would be an incredible opportunity for our students to work with someone who very recently has been on Broadway and has had quite a good career.”

Burnap doesn’t have any formal teaching experience, and he recognizes that teaching over Zoom will be even more challenging when it comes to teaching an acting class. He is up for the challenge, believing that the best acting classes are taught by those who teach what they want to teach.

There are no specific standardized and formulaic teachings for acting, which, as Burnap pointed out, some argue is an innate ability and therefore impossible to teach. Burnap disagrees with that line of thinking and would argue that the bulk of acting training takes place in classrooms. The memories that stuck out most to Burnap as a URI student were of watching his classmates work and grow and doing so alongside them.

While he recognizes the importance of getting cast and acting in front of an audience and developing a relationship with them, Burnap always appreciated that URI’s main focus for their students was not just about getting roles. He plans to continue this by teaching his students to the best of his ability, starting with what he calls the foundation of all theatre performance: joy.

“Being able to take a part in [storytelling] is inherently a joyful act,” Burnap said. “Where I start from with young actors is making sure it’s coming from a place of play, being playful. That doesn’t necessarily mean being happy, but it does mean that it is fun in all aspects of the world to take on someone else’s given circumstances and try to articulate that truthfully.”

Burnap believes that once you start with that foundation of joy, which is essential to the craft, particularly in an industry and career that can be difficult to maintain, then the foundations can be built upon and eventually reach what Burnap considers great acting. He plans to help them through a four-step process of gaining awareness of themselves and what’s around them until they can achieve unconscious ability and acting and reacting just becomes second nature.

“I told them very early on that, both fortunately and unfortunately, none of us will be masters of this craft until we are about 85,” Burnap said. “That’s a giant relief, I think, and it also gives us a goal.”

While his students can’t reach master status in a semester, or even in the next 60 years, Burnap can help guide them on their way. As Howard said, with his experience with URI and theatre on such a grand scale, he brings a unique perspective to the students.

In just seven years since graduating, Burnap has accomplished a lot, and he’s ready to help up and coming actors at URI do the same.

“That’s my goal, that they step on that ladder and head into their sophomore year with a bit more understanding.”