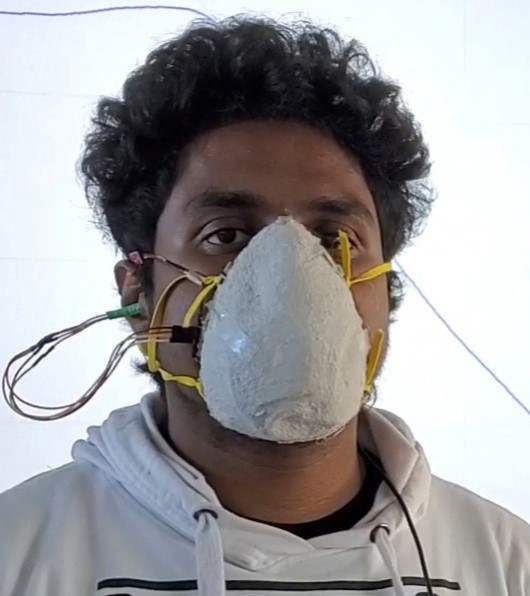 A team of students and professors at the University of Rhode Island have created a smart mask that can monitor COVID-19 symptoms and connect the information straight to your phone.

Electrical, computer biomedical engineering professor Kunal Mankodiya worked with project collaborator professor Manbir Sodhi, along with the eight students in order to facilitate this project. Their project began during the early stages of COVID-19 in March, where they ultimately created the mask named RespDetect.

Most of the research conducted on the smart mask occurred remotely, with every team member having access to work with the hardware components at home.

It was engineered by incorporating respiration and body temperature sensors into their prototype version.

“The symptoms that we’re monitoring [are] your respiration rate, and then we’re measuring the core body temperature, and then we’re also measuring working on cough detection methods,” Kamara said. “It’s supposed to measure your tympanic membrane, but it’s an infrared sensor that is medical grade, medical quality calibrated by a company, and then we put it in a silicone ear model that basically looks like an earbud.”

The programming of the sensors used an application called Arduino, which is an open-source prototype platform that makes data easier to analyze.

From there, the team worked to create the fabric mask prototype. Senior electrical engineering major Michaela Bellisle’s background in both sewing and electronic textiles was integral in this process.

Mankodiya has overseen the research on the smart mask since the project began in March. According to him, the students were able to move past the challenges of remote research and integrated their individual mask components together in the Biosensing Lab to when it opened in July for socially-distanced lab hours.

“I think every week they used to have one meeting, and then every time I used to come and see if I [could] provide advice or guidance,” Mankodiya said. “I think the students themselves started to create their own tasks and milestones. So, I was overseeing the process, but I was just trying to help them whenever there [were] any kind of challenges they [were] facing.”

The team created a biodegradable mask prototype with the help of mechanical engineering student Jake Doherty by August. The team continues to find ways to test out the different elements of the mask.

For participant safety, the team is testing the smart mask prototype on a dummy head to validate the sensors, according to Mankodiya.

Since creating the prototypes of the smart mask, the team entered their design into a competition with the Institute of Electrical and Electronics Engineers Circuits and Systems Society (IEEE CASS). The smart mask team prepared their most recent prototype to demonstrate over the IEEE virtual conference over Facebook Live this past weekend.

As the prototypes continue to be developed and tested, Mankodiya is thinking about the possibility of manufacturing the smart mask in a modular design for people to assemble their smart masks together.

With further research on the mask prototype underway, RespDetect can help frontline workers for multiple reasons.

“It can be used not just for COVID, they can sense respiratory diseases and there’s plenty of those out there, and who knows what is going to happen,” Bellisle said. “So, we definitely are keeping our hopes up hoping that we’ll get somewhere with it.”